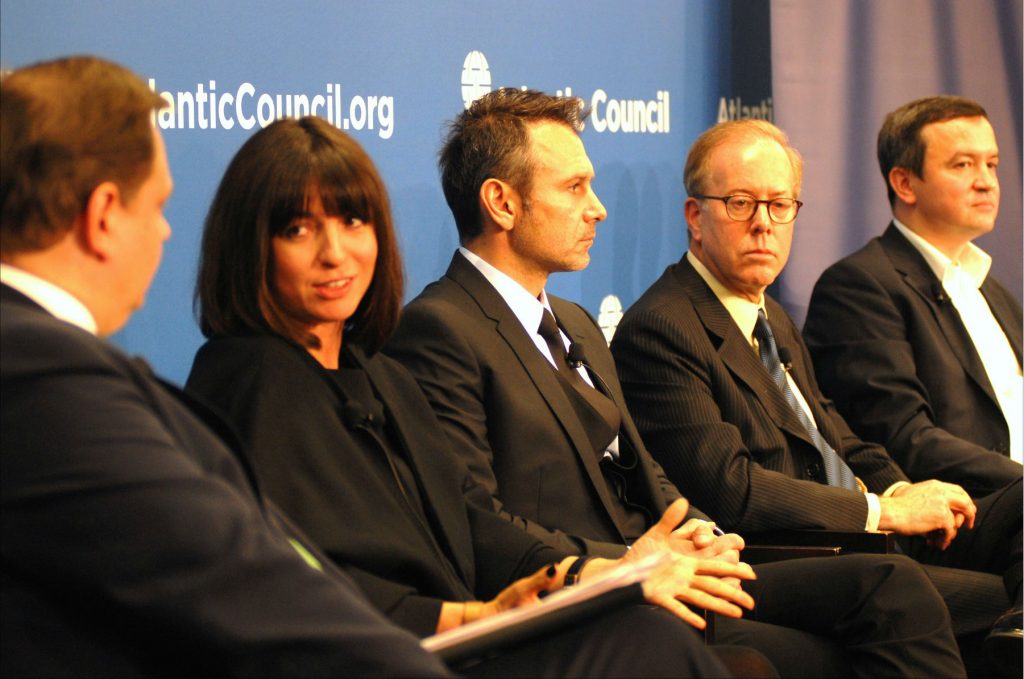 A top Citibank executive and one of Ukraine’s most popular rock stars were among five luminaries who offered their suggestions Monday for cleaning up the endemic corruption that has long strangled the Ukrainian economy and kept foreign investors away.

The five appeared on a November 9 panel titled “Securing Ukraine’s Future: Winning the Fight Against Corruption” and co-sponsored by the Atlantic Council’s Dinu Patriciu Eurasia Center and the American Center for a European Ukraine.

Moderating the discussion was Andy Hunder, President of the American Chamber of Commerce in Ukraine, which in early November issued a corruption perception survey.

Of the Chamber’s 600 member companies, 99 participated in the survey—and most of those are at least partially foreign-owned. Among the findings, 73 percent of companies said corruption had not decreased since the Maidan revolution, while 65 percent said that despite the corruption, they have still managed to find ways of succeeding in Ukraine.

“One big problem is the rampant practice of officials demanding bribes to facilitate the granting of licenses,” Hunder said. “We still have issues with the misuse of officials in requesting donations, trips or other forms of kickbacks. Current legislation is not compliant with international standards.”

Despite newly enacted anti-corruption legislation, he added, “companies believe that the most corrupt entities are the Prosecutor General’s Office and the courts themselves. Half felt there is no political will in government to fight corruption, and at the citizen level, only 5 percent of Ukrainians polled felt that judges and courts are really doing their job.”

Fisher, who joined New York-based Citigroup in 1984 and has headed the bank’s Ukraine operations since 2010, said corruption has flourished at every level of Ukrainian society for decades.

“Corruption creates an enormous shadow economy, lowers the tax base, and lowers the attraction for foreign direct investment (FDI),” he said. “Right now, Ukraine has $1 billion of FDI and a GDP of $100 billion. That’s a ratio of only 1 percent. For emerging countries in Europe, a healthy ratio would be 7-10 percent annually. Ukraine cannot develop with such a low, anemic level of FDI.”

Generally speaking, he said, corruption hurts democracy and the rule of law, raises the cost of goods and services, damages the prospects for future generations, creates apathy, repels FDI, and has an adverse effect on education and health care.

“I think, a realization has come—after the Maidan revolution—that this old cancer of society must be stricken,” Fisher said. “People have woken up and realized it’s going to take many years of effort and sacrifice, but it has to be done.”

Fisher noted that Ukraine ranked 142nd out of 175 countries on Transparency International’s 2014 Corruption Perceptions Index—one of the worst performances of any post-Soviet republic.

“Frankly, when you’re that low, you have to act,” the banker said. “It doesn’t really make any difference to compare yourselves to other countries in a hopeless situation.”

On the plus side, Fisher said that under President Petro Poroshenko, Ukraine has passed a series of anti-corruption laws over the past eighteen months. Among other things, it has set up a National Anti-Corruption Bureau, and is already adjudicating 600 cases.

In addition, over the past twelve months, Fisher said, the National Bank of Ukraine (NBU) has closed fifty banks guilty of “blatant money laundering or other forms of corruption.”

“There’s another forty to go that are just run poorly or are not transparent or not capitalized,” Fisher said, predicting that by end of 2016, Ukraine will have only eighty banks in business—down from 180 at the start of the Euromaidan.

Yet another bright spot is the government’s recent hiring and training of seventy detectives to root out official corruption, as well as efforts by Poroshenko to amend Ukraine’s constitution so that judges are no longer appointed by Parliament or controlled by the Cabinet of Ministers, but become truly independent.

“The current government of Ukraine is the best we’ve ever had,” said Fisher. “They all know what needs to be done, but the problems are so embedded and they’re really strapped for cash. And I’m not sure civil society is totally empowered yet.”

Vakarchuk, a 40-year-old musician who sings with the Ukrainian rock band Okean Elzy, said the key to fighting corruption in his country is education.

“Ukraine needs a sort of educational Marshall Plan from the United States or Western society,” said Vakarchuk, a Yale World Fellow currently based in New Haven, Connecticut. “If you guys want to help us succeed—not only to fight corruption—education is the only way.”

The musician gets angry when people attribute persistent corruption to the “Ukrainian mentality,” he said. “We are hard-working people who love our families and are willing to fight for freedom.”

Even so, “Ukrainians distrust their government, and they distrust each other,” he said, blaming this on upbringing and ignorance. “Uneducated people are easily influenced, they do not question things. Distrust creates uncertainty, uncertainty creates an absence of the rule of law, and the absence of rule of law creates corruption.”

Petrashko, meanwhile, called for the elimination of red tape and needless regulations that often entangles legitimate businesses wanting to expand.

“Ukraine is ready for radical reform which hasn’t been done yet. We need to reduce government’s influence on business,” he said. “For example, you cannot commission new plants or factories in a normal way. We just operate without a license. But this is not sustainable for a long period because we cannot use those assets as collateral. This is a widespread situation that affects small businesses as well as large ones.”

The EBA’s Derevyanko noted a “big gap between the old Ukraine and the new Ukraine”—and that too often, the country’s top officials are still stuck in the old mindset.

“Of course we are all impatient, but Ukraine is a young country. We are only twenty-five years old,” said Derevyanko, whose association represents 900 companies in Ukraine. “We see a shift in society which will bring us to a better future. Of course, it would be better if current politicians understood that the demand to fight corruption is huge. Society will not be stopped, and if the politicians don’t understand that, they will just be swept away.”