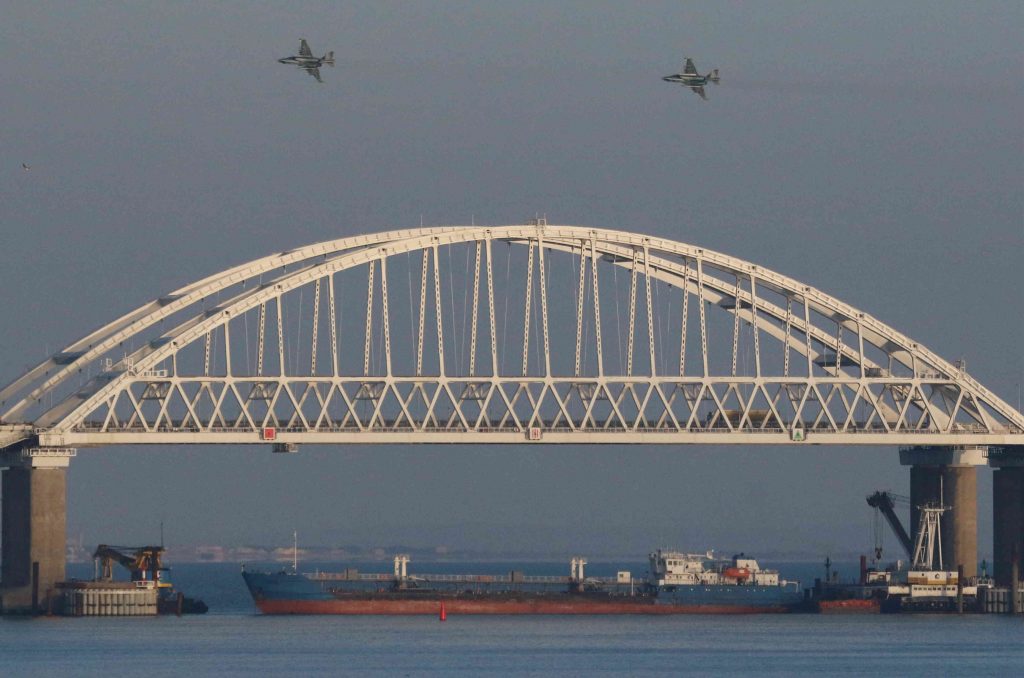 On November 25, Russia seized three Ukrainian naval vessels as they were preparing to enter the Sea of Azov through the Kerch Strait. The Russian Coast Guard rammed a Ukrainian tugboat and fired on the three Ukrainian ships, injuring up to six crewmembers. Twenty-three Ukrainian sailors are now in Russian custody.

This is the first direct naval engagement between the two countries’ militaries since the early days of the conflict in 2014. While tensions have been rising recently in the waters around Crimea, Russia has generally employed proxies. “Little green men” with no insignias on their uniforms took over Crimea in 2014 and Moscow claims to have no troops in eastern Ukraine, despite considerable open-source information to the contrary, pointing to what it claims are indigenous separatists reinforced by Russian “volunteers.”

Where did it happen?

The Kerch Strait is a narrow passage between the Black Sea, a large body of water to the south of Ukraine that encircles most of the Crimean Peninsula, and the Sea of Azov, a smaller body of water to the north. The Sea of Azov is surrounded by Russia to the east, Crimea to the southwest, and Ukraine to the northwest. The only way Ukrainian vessels can reach the Ukrainian port cities of Mariupol and Berdyansk is by crossing through the Kerch Strait into the Sea of Azov.

What is the status of the Sea of Azov and the Kerch Strait?

The Sea of Azov and the Kerch Strait are internal, not international, waters shared by both countries under an agreement that Moscow and Kyiv inked in 2003. This means that neither country can claim the twelve nautical miles of coastal waters established under the UN Convention on the Law of the Sea. Should either country withdraw from the 2003 agreement, it could open a new front in the conflict, with Russia and Ukraine each claiming territorial waters near their undisputed coastlines, and both countries claiming territorial waters around Crimea.

What is the balance of forces in the area?

Russia currently has more than 100 naval vessels of various types in and around the Sea of Azov. Ukraine has fewer than ten, including the ships seized by Russia on November 25. The two Ukrainian gunboats that were seized have a displacement of approximately 50 tons each. The Russian ship Don that led the November 25 operation and rammed the Ukrainian tugboat has a displacement of over 1,000 tons and a crew of nearly fifty.

What was the reaction to the incident?

The Ukrainian parliament passed a measure proposed by President Petro Poroshenko declaring a state of martial law for thirty days—effective November 28—in ten regions bordering Russia and Russian-occupied territories. Poroshenko, whose popularity has been declining, said that the declaration would not impact the presidential election, which is slated for March 2019 and in which he is a candidate.

Russia blamed Ukraine for the incident, claiming that the Ukrainian vessels illegally crossed the Russian border. Russian Foreign Ministry spokesperson Maria Zakharova termed the incident a “provocation” and warned that others may be in the works.

US President Donald J. Trump avoided specifics, saying, “We do not like what’s happening either way.” US Ambassador to the United Nations Nikki Haley was more direct, calling the Russian seizure of Ukrainian ships an “outrageous violation.” US Secretary of State Mike Pompeo voiced US condemnation of “this aggressive Russian action” while calling for direct dialogue between Russian President Vladimir Putin and Poroshenko to resolve the situation. Thus far no US official has threatened punitive action if Russia fails to return to the status quo ante.

EU High Representative Federica Mogherini avoided direct criticism of Moscow, describing developments in the Sea of Azov as “unacceptable,” while European Council President Donald Tusk condemned “Russian use of force” and declared that “Europe will remain united in support of Ukraine.”

Why does this incident matter?

Naval hostilities between Russia and Ukraine in the Black Sea or Sea of Azov would mark a major escalation on two levels: first, they would entail a direct confrontation between the two nations’ militaries rather than deniable proxy forces; and second, they would broaden the existing conflict, which is currently stalemated on the ground in eastern Ukraine, to waterways that both countries have continued to use more or less peacefully since the conflict began in 2014.

What did we learn?

Russia’s new bridge over the Kerch Strait allows Russia to close off the Sea of Azov, which it did on November 25 by docking a tanker under the bridge. This effectively cuts off the Ukrainian ports of Mariupol and Berdyansk from the world. The strait has since reopened, but Moscow proved that it can close it whenever it chooses. Moreover, the low height of the bridge prevents access by many modern container ships to Ukrainian ports, which has already inflicted tens of millions of dollars in economic losses to the Ukrainian and local economies.

Dangerous flare-ups are still possible in the conflict between Russia and Ukraine. Warning signs, like the increased Russian harassment of Ukrainian merchant ships in recent weeks, bear careful watching.

Ukrainian and outside observers expect Moscow to step up its interference in Ukraine in the run-up to next year’s presidential and parliamentary elections. Election interference will be monitored by the Ukraine Election Task Force recently established by the Atlantic Council in partnership with the Transatlantic Commission on Election Integrity and the Victor Pinchuk Foundation.

Image: Russian jet fighters fly over a bridge connecting the Russian mainland with the Crimean Peninsula with a cargo ship beneath it after three Ukrainian navy vessels were stopped by Russia from entering the Sea of Azov via the Kerch Strait in the Black Sea, Crimea November 25, 2018. REUTERS/Pavel Rebrov