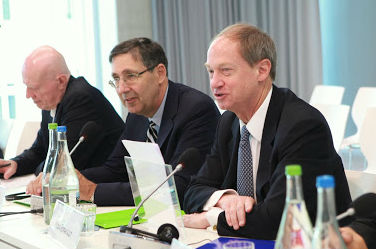 Editor’s note: Ambassador John B. Emerson gave the opening remarks at “Exposing Russian Disinformation in the 21st Century,” a conference sponsored by the Atlantic Council, the European Council on Foreign Relations, and the Heinrich Böll Foundation on June 25, 2015 in Berlin. Emerson’s remarks have been shortened below. The full version is available here.

Guten Morgen. It’s a pleasure to be here and see so many familiar faces in the audience. Today’s conference in many respects represents the essence of the democratic process. Today we want to discuss a problem that we have been struggling to resolve ever since the “little green men” showed up in February 2014 to invade Crimea: countering Kremlin disinformation. I will offer a few thoughts that I hope will stimulate discussion and lead to some specific ideas about how we can expand our network and work together to keep the information space free; and to ensure that our public has the facts and not propaganda.

All of us are here today because we are champions of free speech – one of the core values of the transatlantic relationship. We are here because the Russian government, and the media that it controls, are trying to prevent the publication of information that doesn’t conform to Russia’s aims, and are manipulating the presentation of information to cloak Russia’s actions. The Kremlin’s disinformation campaign goes far beyond controlling its own media. It is aimed at nothing less than presenting a parallel version of reality and disseminating it as if it were news. The Kremlin’s goal is to make people question the value of media at all; to reject the idea of an absolute truth; and to persuade the public that “reality” is relative.

Two reports you will discuss today firmly reject that approach. The Atlantic Council’s report “Hiding in Plain Sight” presents a clear picture of the extent of Russian military involvement in the conflict in Ukraine. The report lays out how Russian soldiers occupied Crimea, something Putin finally acknowledged after weeks of denial. The report shows how Russian troops are fighting in Ukraine, and why these events need to be brought into the cold light of day.

The second report is “Putin. War,” which the Russian opposition leader Boris Nemtsov was working on when he was gunned down near the Kremlin in February. Before he was killed, Nemtsov had been meeting with families of Russian soldiers who died in the war in Ukraine, and he was demanding answers from his government. But Nemtsov’s death did not stop the inquiry, and his supporters completed his mission. The swift condemnation of Nemtsov’s assassination by the international community and the publication of Nemtsov’s work are testaments to the indomitable human striving to set the truth free. And Berlin is just one stop on the Atlantic Council’s tour of European capitals to organize discussions around these reports, ensuring the widest possible audience.

The extent of the Kremlin’s global disinformation ambition is evident in the media enterprise it finances: a $400 million media operation that extends to 100 countries. This operation includes the Russia Today network which offers slick entertainment programs, interspersed with manipulated Russian news content. The Russia Today news agency offers video content provided via its Ruptly website for a modest subscription fee. One of RT’s ploys is to download content from social media sites and then package it as “news.” Kremlin trolls are using social media to lead carefully organized attacks against the Internet, the ultimate democratic communications medium. They flood the comment sections of online news sites in the U.S. and Europe, particularly articles that are critical of Russia. With hate speech, vulgar language, and outright lies, the goal is to make the public think the Internet is an ungoverned zone of unreliable information. And whenever I meet with an editorial board in Germany – something I do on almost a weekly basis – my observation that any article mildly critical of Russian policies results in a flurry of social media attacks is inevitably met with a nodding of heads and sardonic smiles.

This campaign of obfuscation has become all too familiar since the occupation of Crimea. Some have called it the 4D approach:

• dismiss – as Putin did for over a month the obvious fact that Russian soldiers had occupied Crimea in as supposed “news” account;
• distort – as an actress did in playing the role of a pro-Russian Ukrainian;
• distract – as Russian media did with ludicrous theories about what happened to Malaysian Airlines Flight 17;
• and dismay – as Russia’s ambassador to Denmark did in March when he threatened to aim nuclear missiles at Danish warships if Denmark joined NATO’s missile defense system.

This campaign strives to obscure that Putin intends to create dissension among allies and undermine the global rules-based system. So far, he has failed. In Elmau earlier this month, the G7 leaders declared their respect for international law and for human rights, and their support for the sovereign equality of all States, including specifically Ukraine.

In the face of Putin’s overt, calculated, and strategic effort to define reality, we have to be as strategic in forging bonds of solidarity with everyone who shares our ideals and commitment to defending the free information space. My presence here today is somewhat paradoxical. “Government support” for media independence carries inherent contradictions. But in the interest of this discussion, I will outline some of the ways the U.S. Government is trying to uphold the institution of the Fourth Estate.

Freedom of speech is a fundamental human right, and defending that right is a key objective of our diplomatic engagement at all of our embassies. The only answer to disinformation, of course, is more information – obtained through unfettered investigative reporting. In this regard, I commend the German media for their coverage of the crisis in Ukraine and for exposing the Russian government’s crude efforts to deceive the public, as well as for keeping U.S. officials like myself on our toes. We understand that you will ask tough questions and you deserve honest, straightforward answers from us.

For our part, the Department of State has increased funding to train journalists to uphold the ethics of journalism in pursuit of the truth. We are not telling them what to write, what to publish, or what to talk about, but we are helping them learn the skills and craft of professional journalists. In Latvia last month, we contributed funding for a “tech camp” for 60 reporters from Eastern Europe who worked with independent veteran journalists on how to use modern technology to be better reporters. In our embassies worldwide, we working to change cultures of impunity in societies where crimes committed against journalists are ignored, by raising the cases in our meetings with host governments and advocating for prosecutions against those who attack members of the media.

The Kremlin’s iron grip over Russia’s media is driving some who believe in press freedom to speak out, which sometimes costs them their jobs. Recently, a reporter for Russia’s NTV was fired for providing candid comments to a German television station. Some of us remember NTV as the channel that first gained a national audience in Russia for investigative reporting about Chechnya in the late 1990s. Correspondent Konstantin Goldenzweig manifested some of NTV’s former independent spirit when he told his German interviewer that Putin felt insulted by being excluded from the G7 Summit in Elmau, and then compared Putin’s authoritarian regime with the Soviet Union in the late 1980s. After being dismissed, Goldenzweig apologized for participating in the “propaganda madness” of the Kremlin media machine in a posting on his Facebook page.

Others are fighting the “propaganda madness” by speaking on the record to international reporters conducting investigative reports, like the June 2 report in the New York Times magazine about the troll operation in St. Petersburg. In March 2014, Liz Wahl, an anchorwoman for Russia Today in Washington, DC, quit because she no longer wanted to work for a network that “white washed” Putin’s actions.

Beyond losing your job, some Russian journalists have been the victims of physical abuse. Just last week Pavel Kanygin, a reporter for Novaya Gazeta, was detained, beaten up, and then accused of drug offenses in Donetsk while covering an anti-war demonstration. And the stakes can be even higher for champions of free press and free speech in Russia. In commenting about her father’s death, Boris Nemtsov’s daughter Zhanna said, “Russian propaganda kills.” She drew the line of culpability directly to Russian media that incited hatred toward the political opposition and branded them traitors, simply for holding different political points of view. Journalist, author, and human rights activist Anna Politkovskaya, an outspoken critic of Russia’s conduct of the war in Chechnya and of President Putin’s policies, was killed in 2006.

All of us know it’s not enough to release reports and then sit back and wait for someone else to take action. Democracy requires action. Kremlin disinformation cannot spread if human rights advocates like Ambassador Herbst and Carl Bildt, and organizations like the Atlantic Council, the European Council on Foreign Relations, and the Heinrich Böll Foundation, continue to publish the objective truth. This conference is an important and responsible action in response to this challenge to the democratic community of nations.

John B. Emerson is US Ambassador to Germany.

Image: On June 25, US Ambassador John B. Emerson (right) speaks on ways to counter Kremlin disinformation. The extent of the Kremlin's global disinformation ambition is evident in the media enterprise it finances: a $400 million media operation that extends to 100 countries. Credit: U.S. Embassy Berlin.