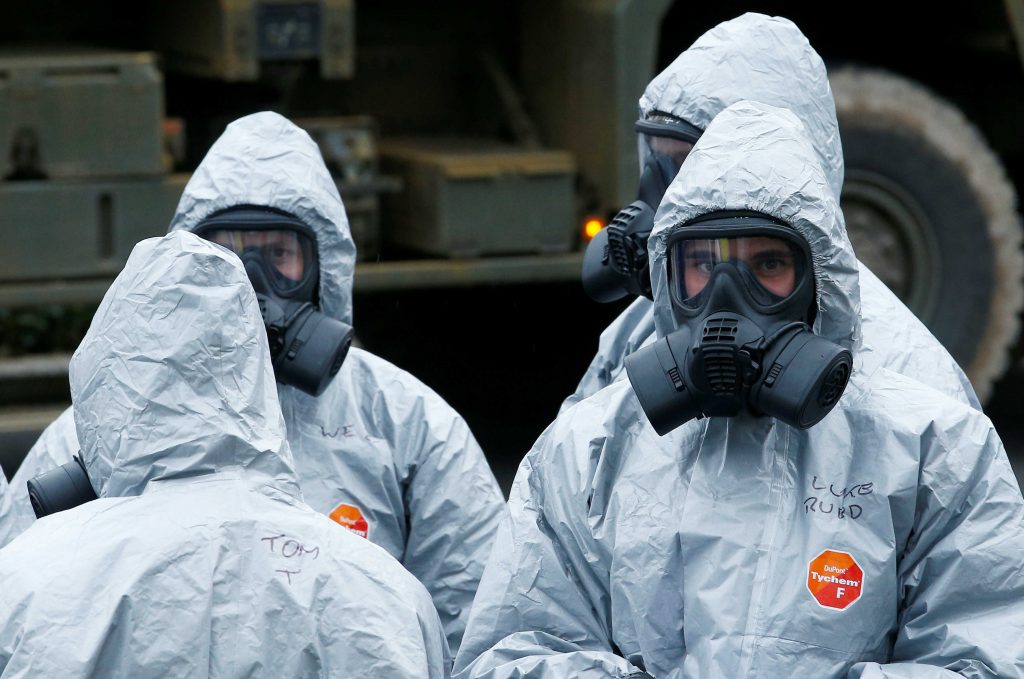 Since Russian troops began seizing government buildings in Crimea four years ago, the international community has become accustomed to encountering new acts of Russian aggression on an almost daily basis. Whether it is masked men in eastern Ukraine, a chemical weapons attack in the English countryside, or an attempted coup in the Balkans, the process is more or less the same—faced by a fresh round of accusations, the Kremlin denies everything and declares, “You can’t prove it was us.” If the evidence pointing toward Russia is particularly damning, Moscow then insists that those involved were non-state actors operating entirely independently of the government. Vladimir Putin opted for this position during his recent NBC News interview, dismissing indictments against thirteen named Russians for meddling in the 2016 US presidential election by saying, “So what if they’re Russians? They do not represent the interests of the Russian state.” It was a similar story when an undisclosed but apparently large number of Russian troops died during an attack on US forces in eastern Syria in early February 2018. As news of the debacle began to leak, Kremlin officials downplayed the scale of the Russian losses while stressing that those involved were private citizens and in no way connected to the Russian armed forces. Even in such apparently open-and-shut cases as the recent assassination attempt in Salisbury, England, Moscow denies everything and then plays the Russophobia card.

This is how Putin’s Russia wages war, by attacking in a myriad of different directions while carefully maintaining a semblance of plausible deniability that leaves its victims partially paralyzed and unable to respond effectively to an enemy they cannot conclusively unmask. Few doubt that Russia is behind each new act of aggression, but it is often difficult to differentiate between Putin’s many proxies and the hand of the Kremlin itself. The result is a slow boil conflict in which Russia is able to punch well above its weight against an array of ostensibly more powerful opponents who fail to recognize they are engaged in hostilities at all.

One of the reasons Putin’s strategy of plausible deniability is so effective is because virtually nobody in the West seems to appreciate the scale of Russian hostility toward the post-Cold War world or the Kremlin’s readiness to resort to acts of aggression. They cannot comprehend why any rational nation would seek to dismantle the international security system, and remain trapped by the post-history delusion that Great Powers do not attack one another anymore. This wishful thinking makes it difficult for many in the West to view Russia’s individual offenses as component parts of a single coordinated global campaign. Instead, the tendency is to treat each incident in isolation without connecting the dots and drawing the obvious conclusions. Americans clamor for sanctions over Russian election meddling, while frontline states in Eastern Europe impose bans on the Russian media and British tabloids call for Russian oligarchs to have their London assets frozen. At the same time, we are still no closer to the kind of united international response that Russia’s actions warrant if taken collectively. This compartmentalization extends to the Kremlin war in Ukraine, with international sanctions for Russia’s military intervention remaining neatly divided into separate Crimean and Donbas elements. Above all, nobody wants to acknowledge the dire reality that a state of war—albeit hybrid war—already exists between Russia and the entire democratic world.

There is no such reticence inside Russia itself. The idea of an adversarial Western world is one of the mainstays of modern Kremlin media messaging, while large swathes of the Russian population simply take this hostility for granted. The worldview promoted by the Putin regime is unashamedly revisionist and resentful, with the Soviet collapse depicted as a tragedy and the accompanying loss of Russian influence an injustice. In this toxic environment, the inherent deceit underpinning Putin’s brand of hybrid warfare requires no further explanation or justification. It is merely payback for the sins of the West. This greatly reduces the risk of any domestic backlash against the Kremlin’s geopolitical adventurism, while helping Moscow to keep its shadow armies and troll factories fully staffed.

Nor is there anything to suggest Russia will change tack anytime soon unless forced to do so. To the contrary, each unchecked act of aggression leads to a new escalation as the campaign that began in Ukraine four years ago continues to expand across Europe and North America. Every societal weakness and vulnerability throughout the West is now fair game for Kremlin information offensives. Ethnic, religious, political, and separatist tensions will be fanned and enflamed at every opportunity. The threat of “little green men” appearing in either the Baltic or the Balkans remains all too real. It is only a matter of time before the Kremlin targets EU member states with the kind of massive cyberattacks deployed with such devastating effect against Ukraine’s infrastructure in recent years. Meanwhile, recent events in England offer a grim and timely reminder of Russia’s apparent readiness to unleash chemical weapons on civilian populations.

The only way to stop this hybrid war is to win it. The Western world already has all the necessary tools to tame Russia but currently lacks the requisite unity and political will to do so. The first step toward changing this would be establishing an international consensus on the need to unite against Russia’s global hybrid war campaign rather than reacting piecemeal to each individual outrage. Nobody is going to declare war on Russia, but the cost of the Kremlin’s aggressive actions needs to rise dramatically. This means exploring ways to progressively cut Russia off from the architecture of international finance while targeting Russian assets in the West in a manner that reflects the Kremlin’s own blurring of the lines between state and non-state actors. It means expanding international initiatives like the Magnitsky Act while at the same time working to reduce Europe’s dependence on Russian gas, even if this brings significant economic costs of its own. It means limiting Russia’s ability to poison the media environment with deliberate disinformation. It most certainly means boycotting propaganda circuses like the 2018 FIFA World Cup.

These measures will be both painful and unpopular. One of the key tasks facing Western governments will be convincing the public that the gravity of the situation warrants the sacrifices asked of them. Anything less would be courting disaster in the not-too-distant future. For the past four years, much of the outside world has remained in denial over the scale of the challenge emanating from Moscow. We have now reached the stage where Russian claims of plausible deniability are completely implausible. From Crimea to Salisbury, Putin is waging a hybrid war against the West. The sooner EU and US leaders collectively acknowledge this, the closer we will be to a solution.