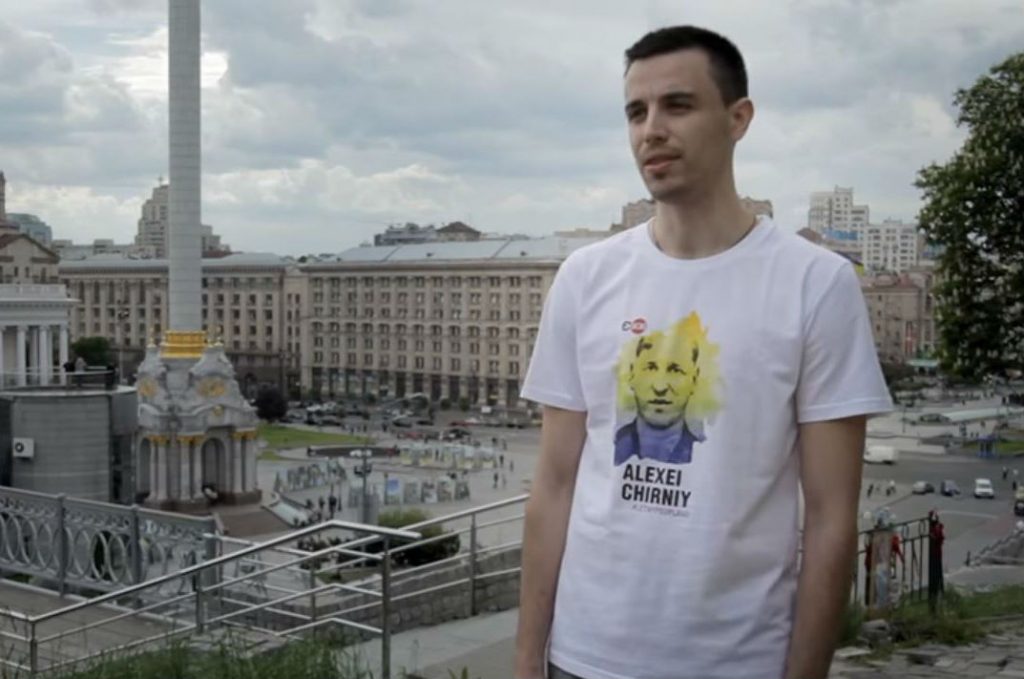 Yuriy Yatsenko was illegally imprisoned in Russia on political grounds and released on May 7, 2015. He speaks about the experience from Kyiv on May 15, 2015. Credit: Screenshot Група Євромайдан СОС

Editor’s Note: Yuriy Yatsenko testified before the US Helsinki Commission in Washington on December 11, 2015. His remarks have been shortened.

I am a Ukrainian citizen who was illegally arrested and detained by the Russian Federation for over a year for political reasons. Nadiya Savchenko, Oleg Sentsov, and others who are less known have suffered and continue to suffer the same fate.

In May 2014, I was in Russia’s Kursk region with a friend on a business trip. During a routine document check that Russian police officers often practice, I was detained. At the police department, an FSB agent (Russian Federal Security Service) showed me a photograph of myself taken during the Euromaidan protests, which I suspect he had found on social media. The agent demanded that my friend and I provide false testimony; he wanted us to admit that we had been recruited by Right Sector or by the head of the Security Service of Ukraine to commit acts of terrorism in Russia. At the time, I was an ordinary student from western Ukraine and could not believe that such absurd accusations were being made against me. My western Ukrainian origin became an additional reason for Russian law enforcement personnel to harass me.

After we refused to incriminate ourselves, they began beating us at regular intervals. We were also offered an option of going on Russian TV and giving a predetermined speech about being sent to Russia from Ukraine to commit subversive acts, but instead we turned to the FSB for protection to save us from the Ukrainian authorities and their persecution. We refused, so the harassment continued and turned into physical and psychological abuse. One FSB official threatened to hand me over to the President of Chechnya.

At first, the abuse and the beatings were constant. I was regularly placed in punishment cells and solitary confinement.

I remember one particularly brutal instance. Some special forces soldiers, wearing masks and uniforms bearing no insignia other than the colors of the Russian flag, put a bag over my head, took me into the woods, and tortured me. They hanged me by my handcuffs for hours and beat me in the head, groin, and other parts of the body. They strangled me. They also simulated an execution, firing a gun next to my head.

The next morning, which was two weeks after my arrest, I used a shaving blade to cut my abdomen and the veins on my arms to stop this abuse. Only then was I taken to the hospital; there I finally managed to inform my family about my whereabouts.

Despite a court decision ordering our deportation, my friend and I were illegally kept at a special detention center for illegal immigrants for three months. During this period, beatings and torture were constant. Three months later, my friend was released and taken to the Ukrainian border, while I was suddenly charged with possessing explosives.

The court found me guilty in spite of the absurdity of these accusations and the absence of any evidence. At first, I was sentenced to two years in prison, but an appeals court reduced the sentence to nine months. By that time, I had already spent a year in detention, so I was released.

The fact that I’m free now is a testament to the publicity campaigns, international pressure, and coordinated work of human rights advocates and lawyers. When I was in detention, guards informed me from time to time that another article about my case appeared in the press, or that another press conference dedicated to my case was held. They seemed to be alarmed by this activism, and kept saying that it should be stopped, that everything should be “done quietly.” That is why public events in support of prisoners are extremely important; they signal to the repressive regime that it is being watched closely and that none of the prisoners are forgotten.

At least thirteen Ukrainians are detained illegally somewhere in the Russian Federation, and at least eight prisoners are being held in occupied Crimea, both Ukrainians and Crimean Tatars. The criminal cases against them are fabricated, most have been brutally tortured, and some have been deprived of their right to meet with an attorney or a Ukrainian consul for over a year. These are people of various ages, professions, and politics, but they share one thing—their lives have become an instrument of Russian state-sponsored propaganda that has created the image of Ukraine as a mortal enemy. Kremlin officials constantly look for ways to justify their hybrid war in Ukraine, which is why innocent Ukrainian citizens are proclaimed to be terrorists, spies, and fascists.

I appeal to you on behalf of the #LetMyPeopleGo campaign. There are no independent courts in Russia; this is why politically motivated cases have no chance of being decided fairly. Only international pressure can help achieve the release of those detained. We are waiting for the return of Savchenko, Olexandr Kolchenko, Sentsov, Gennadiy Afanasiev, Olexii Chirnii, Sergiy Lytvynov, Mykola Karpiuk, Stanislav Klyh, Olexandr Kostenko, Haiser Dzhemilev, Yurii Soloshenko, Valentyn Vyhyvskii, and Viktor Shur. We also demand that Russia stop occupying Crimea and that Akhtem Chyihoz, Ali Asanov, Mustafa Dehermendzhy, Yuriy Ilchenko, Ruslan Zaytullaev, Nuri Primov, Rustam Vaytov, and Ferat Sayfullaev be freed. It is likely that this list is incomplete. Nevertheless, we demand that Russia release all of its prisoners who have been subject to politically motivated persecution.

Yuriy Yatsenko is an activist of the Euromaidan who was illegally imprisoned in Russia on political grounds and recently released. Mr. Yatsenko was a guest speaker at the events organized by the VOLYA Institute for Contemporary Law and Society and Razom.