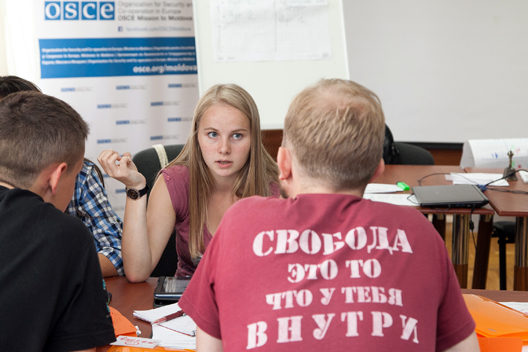 History is a great teacher, so it’s no surprise that Russian President Vladimir Putin’s 2014 annexation of Crimea and his subsequent Kremlin speech justifying it brought back memories of the Nazi annexation of Czechoslovakia’s Sudetenland in 1938. Parallels between Hitler and Putin abound, as do their motivations and the eventual global impact of the two annexations—even though they took place seventy-six years apart.

Both Transnistria and the Donbas region of Ukraine identify strongly with Soviet history and both are industrial hubs. Yet ethnic conflict has never been a factor in either place. Transnistria has always been populated by the same ethnic groups as the rest of Moldova, while the Donbas has always been home to the same groups as the rest of Ukraine.

Both conflicts reached their worst level of violence once Moscow got directly involved: Russia’s 14th Army in the case of Moldova, and Russian troops and Russian-backed rebels in eastern Ukraine.

Initially, Russia mobilized locals with stories of mysterious aliens intent on invading their respective regions. In Transnistria’s case, the main emphasis of Kremlin propaganda was the Romanian threat. In the Donbas, the propagandists were more creative, frightening inhabitants with warnings about NATO weapons and the “immoral values” of post-modern Europe.

Prior to the Soviet collapse, locals were warned that if Moldova became independent, it would immediately join Romania, and that they’d suffer discrimination at the hands of “Nazi Romanians.” Likewise, the population of the Donbas was intimidated with threats that the region’s Russian-speaking inhabitants would be forcibly “Ukrainized” by “Nazi Ukrainians.” In both cases, these fears generated support for Russian troops, who were welcomed as saviors.

Yet violent clashes resulted in de facto losses of state sovereignty over secessionist regions, and Moscow—even though it had instigated both conflicts—cynically joined in ceasefire talks, acting as peacemaker. In both Transnistria and the Donbas, Russia has tried, and still tries, to impose a pattern of federalization that will eventually give separatists the right to veto any Moldovan or Ukrainian overtures towards the West, thereby ensuring continued Russian influence on Chisinau and Kyiv.

Sadly, in both cases the rest of the world has limited ability to influence the situation, and the Organization for Security and Co-operation in Europe (OSCE) is basically helpless in its attempts to mitigate the two conflicts, or effectively monitor events on the ground.

Does this mean that Ukraine’s Donbas is condemned to suffer the same fate as Moldova’s Transnistria: decades of frozen conflict? While historical parallels can be helpful, they’re also sometimes tricky, and what befell Moldova will not necessarily happen in Ukraine.

Indeed, the “frozen conflict” option remains on the table. However, in Moldova’s case, Russia was operating in the “defensive realism” mode—whereby Russia saw itself culturally as a mixture of East and We. In terms of international status, it perceived itself as a great power, temporarily in crisis; and in terms of geopolitical borders limited its appetites to Russia’s borders with nearby ex-Soviet republics. These days, Moscow’s rulers are in the “revolutionary expansionism” mode. Russia’s self-perception has changed and it now perceives itself as a Eurasian, anti-American superpower.

Therefore, Moscow is unlikely to be satisfied with the “frozen conflict” option. Rather, it will strengthen efforts to regain control over the whole territory of Ukraine as it plots a larger fight for influence over all of Europe, using its vast arsenal of hybrid war weapons. While Russia’s defensive realism provided Moldova twenty years of the status quo, Russian revolutionary expansionism gives Ukraine much less time to find a solution and get strong. Although Europeans may not realize it, they also have limited time to adapt to the new reality of Russian expansionism and to react promptly.

One might call such an approach alarmist, but anyone predicting war between Russia and Ukraine just a few years ago would also have been called alarmist. In this regard, history teaches us that sometimes it’s better to be paranoid than have to face the consequences of indifference later on.

Sergiy Gerasymchuk is a board member of the Strategic and Security Studies Group in Kyiv, Ukraine.

Image: Students in Vadul-lui-Vodă, Moldova, discuss political issues on June 28, 2015, in preparation for debates to be held this autumn with the help of the OSCE Mission to Moldova. Yet Sergiy Gerasymchuk argues that the OSCE is “basically helpless” in its attempts to mitigate Moldova’s conflict with Russia over the restless Transnistria region. Credit: OSCE/Liubomir Turcanu