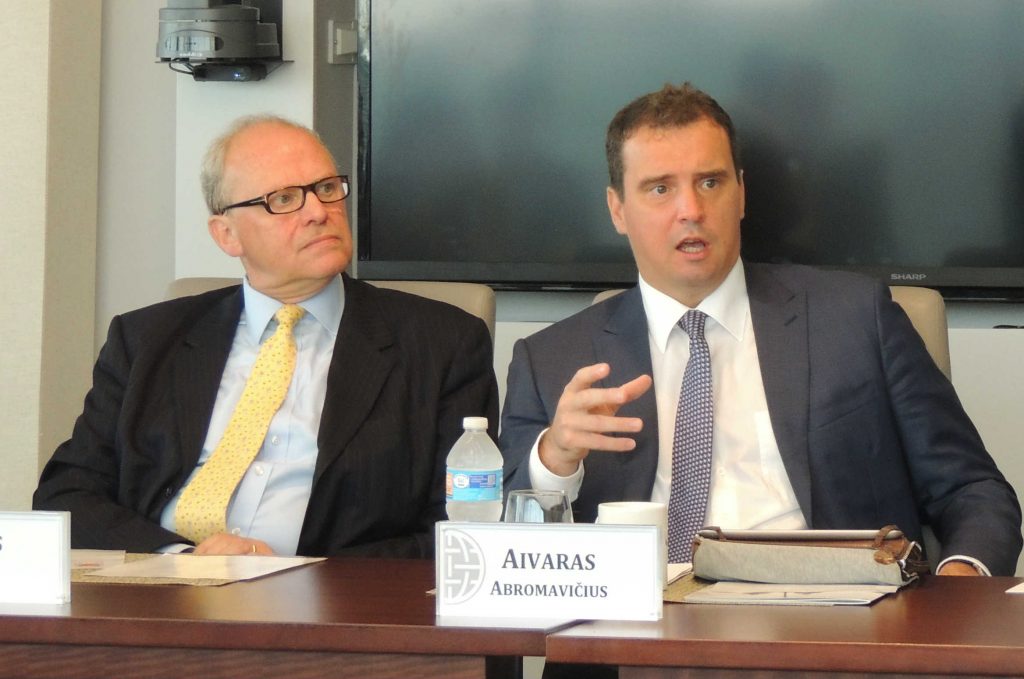 The Greek financial crisis has diverted global attention away from Ukraine, but it also “sheds a positive light” on the Kyiv government’s achievements, Ukrainian Economy Minister Aivaras Abromavicius said in a July 14 interview.

“Greece is rejecting reforms, and we are embracing reforms,” said Abromavicius, who visited Washington for the first-ever US-Ukraine investment summit held a day earlier.

He appealed for more financial assistance for Ukraine on the grounds that it has undertaken some reforms sought by international financial institutions. The United States and the European Union have together pledged the equivalent of €7.5 billion for Ukraine this year.

However, Abromavicius and others worry that recent legislation passed by Ukraine’s parliament could effectively water down his government’s reform efforts.

The worst law, he said, is one that restructures foreign currency loans. This will lead to about $5 billion in losses to Ukraine’s banking sector, he predicted.

Abromavicius noted that such bills are symptomatic of the populist measures promoted by some politicians with an eye on this October’s local elections.

“The closer we get to the local elections, the higher is going to be the probability of more of those types of situations,” he predicted.

Aivaras Abromavicius spoke with the New Atlanticist’s Ashish Kumar Sen. Here are excerpts from our interview:

Q: What implications do the Greek economic crisis have for Ukraine?

Abromavicius: On one hand, it is diverting attention away from Ukraine. On the other hand, it sheds a positive light on what we do. What we say is that Greece is rejecting reforms, and we are embracing reforms. The support that we are getting on a per-capita basis is a fraction of what Greece has received already. It is really two different stories. We would really like to receive more assistance in light of all of these events.

Q: Do you believe Eurozone creditors have been too harsh with Greece?

Abromavicius: If you want to receive assistance you should really commit to the reform process, which Greece has not done. As [European Commission] President [Jean-Claude] Juncker told us in the end of April conference in Kyiv, “You keep reforming, we keep supporting.” I think it is as simple as that. Those that go down the path of reforms should count on more assistance.

Q: This week you participated in the first-ever investment summit between Ukraine and the United States. What were some tangible achievements from this summit, and what is your assessment of US interest in reforming the Ukrainian economy?

Abromavicius: Interest was huge. Our delegation also met with Vice President [Joe] Biden and [US] President [Barack] Obama, which just shows that Ukraine is high on the agenda for US politicians.

From the business side, participation was more than what we expected—high-level executives from a number of companies, many of which already have a business presence in Ukraine. Those will be the first that will send a signal that things [in Ukraine] are changing for the better, that the investment climate is improving.

As a practical result of the conference, about seven different transactions have been announced in the agri sector, in the technology sector, and in the oil and gas sector.

Q: Some people worry about proposed legislation in Ukraine’s Parliament that would water down economic reforms. Do you share these concerns?

Abromavicius: Absolutely. I am worried as well. The closer we get to the local elections, the higher is going to be the probability of more of those types of situations.

The worst law that has been passed recently was the law on restructuring foreign currency loans. That will result in about $5 billion losses for the banking sector, which is already weak. More coordination between the government and Parliament is needed to avoid those types of situations.

Q: What has the government of Ukraine done so far on the reform process?

Abromavicius: So far, the biggest reforms have been done in the gas market sector. We got rid of the middlemen in trading gas between Russia and Ukraine. We passed a law which deregulates the market and brings in market pricing. We raised gas tariffs by 400 percent to households and we will compensate the poor with transparent and indiscriminate subsidies.

[On] banking sector reform, we cleaned up almost fifty banks out of 180 in the last one and a half years. We passed a law on the responsibility of the bank owners and independence of the Central Bank.

[We made] massive gains on the deregulation front in the agri sector and the tech sector, and [have done] traffic police reform from the fourth of July. In Kyiv, we have a pilot project where all the policemen were fired and new ones with new functionality, new outfits, and new cars were introduced—all of them more or less with higher education, lots of women, and a completely different attitude. That was done with the help of the American traffic police and led by the former Minister of Internal Affairs of Georgia.

Q: You have said these achievements have not received due recognition. Why is that the case?

Abromavicius: First of all, the progress is substantial but more was and is expected. The country is in a state of war with very deep economic recession. People expect massive progress in a short period of time. We have seen these types of disappointments on behalf of the population in other countries.

But overall we are not good at communicating what has been done. We need to beef up our communications effort, both at home and abroad.

Q: You have been quoted as saying the Ukrainian economy has rebounded, that the worst is behind you. What are your priorities going forward?

Abromavicius: Priorities going forward from the ministry’s point of view is tax reform for business. So we debate tax reform over the summer, we vote in September/October, and we have a new tax system from January 1. We expect this new tax system to be one that would encourage more investment and job creation, and result in the shadow part of the economy shrinking.

Number two, for myself, will be a regulatory guillotine, the complete review of the regulatory framework in Ukraine. This is the next stage of deregulation and privatization. So we are moving closer toward privatization, because a state with weak institutions, as Ukraine is, cannot be an efficient owner of the assets. We need to really sell the assets to support private initiative.

Q: How has the privatization process worked so far?

Abromavicius: So far, we have not sold anything. We are only in the preparatory stage. The top fifteen companies in the first stage have been identified, mostly in the energy sector, electricity sector, and chemicals sector.

What is important from our point of view is that we sell the first couple of companies to foreign strategic investors to gain more confidence from the population and business community, that the process is transparent, and there is real foreign interest in these assets.

Q: What obstacles do you face in moving forward with the reform process?

Abromavicius: In the reform process, we obviously experience an enormous amount of challenges, which is resistance from the vested interests that are deeply enshrined.

As we get closer to local elections at the end of October, the more populist some of the politicians in the Parliament become, the more difficult [it will be] to pass the laws that the cabinet of ministers initiates.

Pay is a big problem on the public servants’ side. When customs officials and judges and tax administrators receive very low pay, there are absolutely more chances for corruption. So we really need to do massive public administration reform, where we reduce the numbers of public servants drastically but we compensate the rest with higher pay.

Q: How much growth do you expect in 2016, and is this growth contingent upon the war staying as is and not escalating?

Abromavicius: We are still in the process of estimating growth next year. It is not going to be massive yet, but it is contingent on the situation in the east, and the assumption is that the situation does not escalate.

Q: Ukraine bought twice as much gas from the EU as from Russia in 2015. It implemented the EU’s Third Energy Package and signed a new Interconnection Agreement with Hungary’s transmission system operator to allow natural gas flows in both directions. How do you plan to further secure Ukraine’s energy supply, especially if Russia manages to eliminate Ukraine from its natural gas transit route to Europe by 2019?

Abromavicius: We will continue to buy gas from Europe, as simple as that. [On July 13] we also lowered royalty duties for oil and gas exploration and production companies, which certainly needs to result in higher production domestically, further decreasing dependency on external sources of energy.

Q: Do you think of yourself as a reformer? You’ve said you hope to radically cut government spending, but what kind of specific policies will you enact to make this happen?

Abromavicius: I am a reformer. I believe I have created a team in the ministry that is the most reform-minded of anyone in the government. Yes, we continue to support fiscal consolidation and decrease of government expenditures, and we lead by example. We have shrunk our workforce in the ministry from 1,200 to 800 in the span of eight months.

Q: What do you hope to achieve by radically lowering the number of officials in your ministry? Do you think this will help reduce corruption?

Abromavicius: Absolutely. First of all, many in the ministry were possibly involved in all kinds of corruption. Many others were simply obstructing the reform process. Our vision is a smaller but more efficient state. We need to cut public servants across the board because business wants to see government officials as rarely as possible.

Image: “Greece is rejecting reforms and we are embracing reforms,” Ukraine’s Economy Minister Aivaras Abromavicius said in a July 14 interview. The Minister was in Washington for the first-ever US-Ukraine investment summit held July 13.