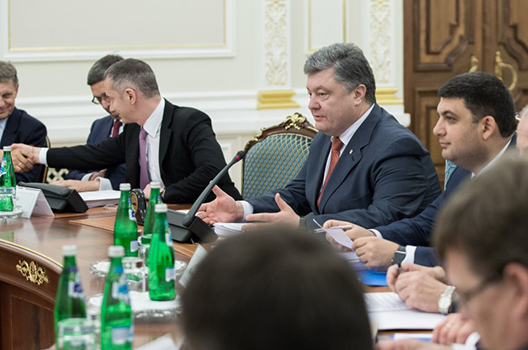 Few Ukrainians realize how impressive their economic reforms were in 2015. The question today is whether that reform wave will continue, or has come to a halt.

The floating exchange rate has stabilized and allows Ukraine to balance its foreign account. In two years, the National Bank of Ukraine has closed no fewer than 80 out of 180 banks because of corruption or failure. The payroll tax has been cut from 45 percent to 22 percent. Inflation has plummeted from an annualized high of 61 percent in April last year to 8 percent in July. These are great achievements by any standard.

Many reforms have continued this year. The new government under Volodymyr Groisman completed the unification of energy prices on May 1. In August, compulsory electronic public procurement was introduced for all state purchases above a minimal level. Three anti-corruption bodies have been institutionalized. Bank cleansing proceeds. Absurd rules for early retirement have been abolished. The country’s macroeconomic stability remains strong, and Ukraine has returned to economic growth.

Few countries can match this list of recent reforms, but it does not impress Ukrainians, who ask, “Where is the beef?” It is true that the reforms are not comprehensive, and the standard of living has fallen sharply. The reform ministers who drove the reform wave were all ousted in April. In its first 100 days, the Groisman government presented 177 draft laws to parliament, which adopted only eleven of them. This government has far less parliamentary support than its predecessor and appears less enamored with reform ambitions.

In March 2015, Ukraine concluded an important four-year stabilization program with the International Monetary Fund (IMF) with total financing of $17.5 billion. But only $6.7 billion has been disbursed. A full year has passed since Ukraine received its latest IMF tranche. In late 2015, the Poroshenko Bloc stalled the government’s budget and tax reform. Early this year, President Petro Poroshenko ousted Prime Minister Arseniy Yatsenyuk.

After a new government was finally formed in April, it stated each month that it would agree with the IMF on a new disbursement for the next month, but that has not happened. The last impediment was that the government failed to establish a secure database for senior officials’ incomes and assets by the deadline of August 15. The next deadline is September 1.

The new government is lacking in policy coordination, but the country’s financial crisis is no longer acute. Ukraine has $14 billion in international reserves, allowing it to muddle through. Still, Ukraine needs continued IMF financing. If the IMF executive board gives its approval, the nation would receive an IMF credit of $1 billion, but also a US loan guarantee of $1 billion, and 600 million euros from the EU.

Then Ukraine’s reserves would rise from $14 billion to $17 billion, which would allow a substantial liberalization of still very strict currency controls. Moreover, foreign and domestic investors want to see an IMF approval before they invest significantly. Western creditors are perfectly happy with the budget balance, current account balance, and inflation: corruption is the concern.

This August has seen an open struggle between the old-style prosecutor general’s office (GPU) and the new, plucky National Anticorruption Bureau (NABU), headed by Artem Sytnik. NABU has daringly opened criminal cases against GPU and the Minister of Interior, while GPU has responded in kind. Their respective special forces have fought each other in fistfights. The West supports NABU vocally, while the presidential administration quietly backs GPU.

The West also wants the Ukrainian government to finally start privatizing some of its 1,824 operating state-owned enterprises. An attempt to privatize the large Odesa fertilizer plant failed because no bidder appeared. The initial price was far too high, and two of Ukraine’s biggest businessmen maintain large unsettled claims. The government promises new privatization attempts, but since February 2014, no big asset has been privatized.

USAID and the EU insist on the establishment of an independent energy regulator, which does not seem to be forthcoming because of strong anti-competitive interests. The IMF also calls for land reform and pension reform, which could boost economic growth greatly, but the Ukrainian government fears rising populist resistance.

After a total GDP fall of 17 percent in 2014-15, the real economy has bottomed out, and new growth is tepid. Realistically, the IMF predicts a GDP growth of 1.5 percent this year. A recovery growth of 5-6 percent a year would have been possible, but property rights are too weak.

The Ukrainian government needs a new start in September. Hopefully, it can fix its system for e-declarations of assets and incomes, permitting the IMF board to convene. But will the government be able to privatize, improve the judicial system, and prepare pension and land reforms? Perhaps the best we can hope for is that the sound reforms that have been implemented will not be reversed.