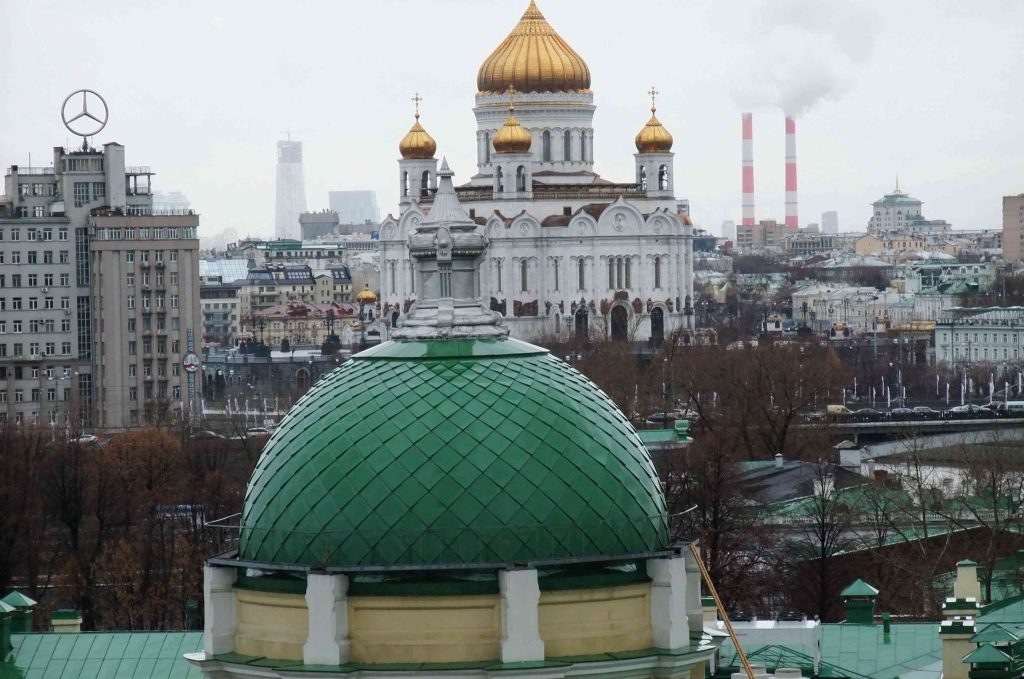 How would the West react to a major escalation of the war in eastern Ukraine? What would Brussels and Washington do if Russia continues to send troops there?

Even though analysts often suggest arming Ukraine with defensive weapons, what people sometimes forget is that the West is still, by far, Russia’s largest trade and investment partner. Current sanctions against Moscow only forbid the export of a limited number of services and technology to Russia—leaving most of Russia’s trade with the West intact. In particular, they do not limit Russia’s crucial energy exports to the European Union.

Dominating those exports is crude oil—not natural gas. About 40 percent of Russia’s state budget consists of revenues from crude oil export tariffs, and less than 10 percent from natural gas. Moreover, the private income generated from oil exploration, drilling, and transport comprises a large chunk of Russian industry, and is vital to the functioning of Russia’s economy. Most of that oil and gas goes to EU markets through pipelines, as Russia has only a small tanker fleet and insufficient infrastructure to export large volumes of oil via the sea.

Unlike Russia’s exclusion from the SWIFT bank payment system, an EU oil embargo would involve a physical obstacle the Kremlin couldn’t easily circumvent. While Russia may have a Plan B in case its banks can no longer use SWIFT, the country cannot redirect its oil trade routes overnight because it relies largely on pipelines to the West. In addition, the EU doesn’t depend on Russian oil to the degree many assume. Being fungible, Russian crude could be replaced with oil delivered via tankers and other means from elsewhere. To be sure, Russia could find ways to export its oil elsewhere. Yet, for at least awhile, Moscow would encounter enormous logistic, infrastructure, legal, and financial challenges delivering sufficiently large amounts of oil to non-European customers.

Pumping oil through existing Eurasia pipelines demands considerably less efforts and money than to get it first to ports (perhaps, first only by train), put it in tankers (some not belonging to Russia), send the tankers (somewhere far away), and unload them there at additional cost. Russia would certainly try hard to arrange this. Yet, it may take many months, if not years of serious preparation and significant infrastructure investment to function smoothly. Once arranged, such exports could be more, or even much more, costly than simply pumping oil from Siberia to the EU through the existing East European pipeline system. Otherwise, Moscow would have done that long ago.

While a few EU refineries rely on Russian oil delivered via pipelines, the EU economy as a whole does not depend on those imports. EU financial losses would be not insignificant, as parts of its industry are geared towards raw material deliveries from Russia. But the EU should be able to limit these losses by offering special support to member countries and refineries likely to suffer the most from new sanctions.

While Brussels would have to compensate a number of Western companies and incur certain losses, a temporary embargo on Russian oil imports would send Moscow a powerful signal and demonstrate its dependency on EU cooperation. Moreover, the US Congress could coordinate its own reaction to new Russian expansionism with the EU. Washington could support European sanctions by simultaneously lifting its own oil export ban for as long as EU sanctions remain in place. US oil on the world market would both ease the burden of the embargo on the EU while complicating Russia’s efforts to substitute its large European market with Asian and other customers.

To be sure, it would take considerable political muscle throughout the EU’s institutions and member states to push through such a joint policy—and probably it would only come up in the event of a major new escalation in eastern Ukraine. The threat further Russian military advances in Ukraine would pose to EU security could, however, be enormous. For instance, Europe’s largest nuclear power plant is located in the southeastern Ukrainian region of Zaporizhiya, only approximately 250 kilometers from the current combat zone. Should the Ukrainian state collapse as a result of Russia’s hybrid war in the Donetsk region, millions of Ukrainian refugees could flood the EU. Given such a prospect, joint action by EU member states to ban Russian oil imports looks feasible.

It’s true Russia could temporarily dig into its two reserve budgets and considerable gold reserves to compensate for immediate income losses. During a short transition period, the Kremlin may still have some freedom of action. It would try to undermine EU unity and possibly escalate tensions in Ukraine, Georgia, and Moldova. Hostilities could increase before Moscow would be forced to seek accommodation with the West.

Concerning the effectiveness of an oil embargo, sceptics argue that the history of previous economic sanctions shows their limited or, at least, slow political impact. Yet, Russia’s current living standards, social spending, consumers behavior, industrial system, budget composition, trade paths, pipeline infrastructure, and integration into the world economy are not fully comparable to previously sanctioned, anti-Western countries such as Iran or Cuba. The dependency of the Russian regime on the availability of the EU energy market is high. Therefore, Western leverage is, in the Russian case, stronger than in non-European societies that function differently.

Other analysts warn that the Kremlin could exploit the EU’s considerable reliance on Russian gas to respond with its own sanctions. Yet exporting large volumes of gas is technologically far more complicated than trading oil globally. The vast Eastern European gas pipeline system creates interdependence rather than one-sided European dependence on Russia. The Russian state gas company Gazprom needs the EU market just as much as the EU needs Gazprom deliveries. While the EU would be hit hard by a Russian gas export ban, Gazprom would—for a long time—be unable to deliver equivalent amounts of gas elsewhere. In the event of a Russian trade war with the West, the Russian economy—having only reduced EU oil revenue exports—would already be in turmoil, making it unlikely that Russia would also forego income from gas exports to Europe. It’s surprising how often Western media discusses the EU-Russia gas trade—even leading some to wonder whether Europe’s weekly exchange of pseudo-arguments about its alleged one-sided dependence on Russian gas deliveries is artificially induced.

The EU would have to get its act together to make an oil embargo work. That would cost money, energy, and nerves. At the moment, such a measure looks prohibitively expensive and politically unlikely, if not altogether outrageous. Yet a new Russian military offensive in southeastern Ukraine could spark a major war between Europe’s two largest countries, and collapse of the Ukrainian state. It would trigger an exodus of hundreds of thousands—if not millions—of EU-bound refugees and create a zone of instability around two of Ukraine’s four nuclear power plants. The West would have to make sure its response matches the Russian challenge. A temporary EU embargo on Russian oil imports and a lifting of US oil exports could be the decisive combination to contain Kremlin adventurism.

Many of the ideas in this article were influenced by the work of Dr. Roland Götz (Free University of Berlin), and a recent English-language discussion of a draft for this proposal by Wikistrat. My thanks go to all of these discussants. Any remaining misjudgments are mine.

Andreas Umland is Senior Research Fellow at the Institute for Euro-Atlantic Cooperation at Kyiv, and General Editor of the “Soviet and Post-Soviet Politics and Society” book series published by Germany’s ibidem Press.

Image: Rosneft (green dome) is Russia's largest oil company. About 40 percent of Russia’s state budget consists of revenues from crude oil export tariffs, and less than 10 percent from natural gas. The private income generated from oil exploration, drilling, and transport comprises a large chunk of Russian industry, and is vital to the functioning of Russia’s economy. Most of that oil and gas goes to EU markets through pipelines. An EU oil embargo would involve a physical obstacle the Kremlin couldn’t easily circumvent. Credit: Creative Commons/Qweasdqwe