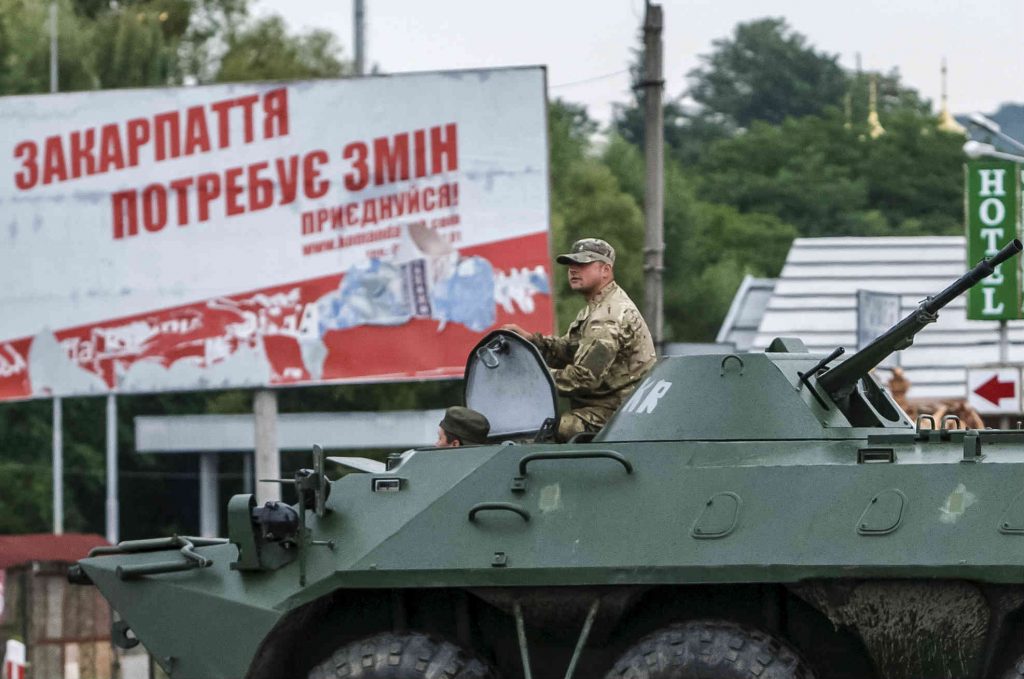 Ukraine made headlines again when a nationalist group and police in the western city of Mukachevo exchanged gunfire that killed three on June 11. A group of 21 armed members of Right Sector seized a sports complex owned by Member of Parliament Mikhail Lanyo and reportedly beat and shot one of his employees in the process.

When the police arrived at the scene, a firefight erupted. Local authorities surrounded the complex and closed the roads, but Right Sector fighters broke though the blockade, in the process destroying police vehicles and provoking another firefight. A chase ensued and Right Sector fighters are still at large. SBU contingents and an elite police unit are trying to negotiate the surrender of the fighters. Authorities have been in touch with Right Sector leader Dmytro Yarosh to expedite their surrender. A bomb explosion near Lviv’s police headquarters on Tuesday was attributed to Right Sector.

This standoff is fundamentally about the control of cigarette smuggling, according to Ukrainian officials and observers, including Member of Parliament and journalist Mustafa Nayyem, who was in Mukachevo at the time. Smuggling has long been a principal activity in this region that borders Hungary and Slovakia. Many local officials, including border guards and customs officials, have either participated in or turned a blind eye toward it. Cigarettes are much cheaper in Ukraine than in the EU, so sneaking cigarettes into the EU from Zakarpattiya is a lucrative business thought to be worth $2.1 billion.

What triggered the violence? Probably a business dispute. The smuggling trade had been split between two prominent figures in Zakarpattiya: Members of Parliament Viktor Baloha and Mikhail Lanyo. The two were uneasy partners until 2012, when Lanyo aligned with then President Viktor Yanukovych’s Party of the Regions and began to take a greater share of the business. After Yanukovych fled the country in February 2014, Right Sector began to provide security for Baloha’s business. Right Sector fighters approached Lanyo’s compound July 11 to persuade Lanyo to be more understanding of Baloha’s interests. But the fighters weren’t supposed to resort to violence.

Yarosh and Right Sector spokesman Artem Skoropadsky offer a different view. They claim that local authorities and bandits opened fire on their fighters, who were urging local officials to take steps against corruption. In one statement, Skoropadsky warned authorities that the Right Sector might take active measures like those employed on the Maidan (to bring down Yanukovych) at the President’s office and the headquarters of the Ministry of Interior if their concerns are ignored.

For months, the dangers of militias have dominated newspapers and conversations in Ukraine. As the economy weakens, and as public satisfaction grows with the slow pace of reforms, private militias might put pressure on the government or even force leadership changes. But this concern may be exaggerated.

While Right Sector insists that its activities in Mukachevo were designed to root out corruption, it appears that this organization was coopted to help one side gain greater control of the smuggling trade. The violence in Zakarpattiya follows the last scandalous use of a private militia by oligarch and then-governor of Dnipropetrovsk Ihor Kolomoyskyi to retain control of Ukrnafta in March. In Ukraine, the danger from private militias is closer to Al Capone’s Chicago than Maximilien Robespierre’s Paris. The motivation for the unauthorized use of force is greed, not righteous anger.

While ugly, some good might come out of the situation. Kolomoyskyi’s overreach in March gave Poroshenko an opportunity to take him down a peg. Some have criticized Poroshenko’s slow reaction to the disorder in Zakarpattiya, but he is lining things up to force the surrender of Right Sector fighters. He and other officials have also contrasted the patriotic actions of Right Sector in the war against Kremlin aggression and their criminal activity in Mukachevo. That is a distinction that makes it harder for Right Sector, or any other volunteer battalion, to hide criminal activity under a halo of heroism.

Image: An interior ministry serviceman sits on top of an armored personnel carrier (APC) at the scene of a shootout near Mukachevo, Ukraine, July 13, 2015. Kyiv has called on Right Sector, which played a prominent role in protests that toppled Moscow-backed President Viktor Yanukovych a year ago, to lay down their weapons after the shootout on Saturday in the town of Mukachevo killed at least two people. The billboard reads, "Zakarpattia (Transcarpathia) needs changes. Join in!" REUTERS/Stringer