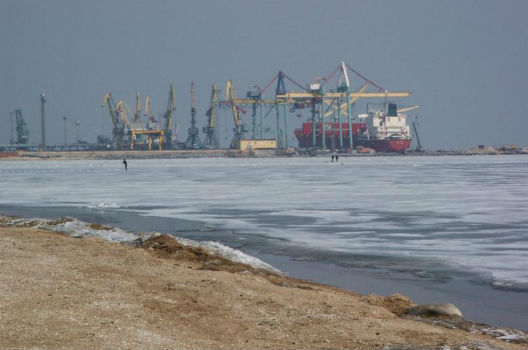 Cities like Mariupol in southeastern Ukraine would benefit from a guarantee fund that would insure foreign direct investment against political risk. This Russian-speaking town is strategically critical for Kyiv, as it occupies a potential land corridor between the separatist-controlled Donbas regions and the Crimean peninsula. Mariupol’s chemical and heavy industries are also of larger economic importance to Ukraine. Without investment, cities like Mariupol will decline economically, which will create the conditions for social instability that the Kremlin can exploit. Credit: Oleg Zima/Creative Commons.

Stimulating Ukraine’s economy is a key goal of the reforms that are underway in Kyiv. Ukraine’s Association Agreement with the European Union (EU) should enable better economic management and freer trade. But there’s an important precondition for growth: investor confidence. Domestic businessmen and foreign investors must feel sufficiently motivated to spend their money, time, and energy to utilize, renew, and create Ukrainian production facilities. Russian President Vladimir Putin’s strategy in Ukraine, in part, aims to deprive the Ukrainian state of its ability to offer credible physical and legal protection for private property and social stability. The two separatist areas in the Donbas have little value for the Kremlin in themselves, but they are important instruments that Moscow can use to stir up domestic unrest in Ukraine and unleash uncertainty that chases away investors.

The West cannot fundamentally solve this quandary for Kyiv. It can, however, partially compensate with a guarantee fund to insure foreign direct investment (FDI) against political risk. This is an idea that George Soros proposed one year ago, and it would be a signal to Western investors that Ukraine is safe. In particular, it would help Ukraine’s eastern and southern regions near the Russian border attract investment. These regions are close to Russian regular forces, irregular commandos, and secret service units—and it’s scaring investors away. One example is the city of Mariupol in southeastern Ukraine near the Azov Sea. This Russian-speaking town is strategically critical for Kyiv, as it occupies a potential land corridor between the separatist-controlled Donbas regions and the Crimean peninsula. Mariupol’s chemical and heavy industries are also of larger economic importance to Ukraine. Without investment, cities like Mariupol will decline economically, which will create the conditions for social instability that the Kremlin can exploit.

Foreign investment guarantees aren’t a new instrument in international development. One of the World Bank’s four subdivisions, the Multilateral Investment Guarantee Agency, focuses on this issue. Berlin’s so-called Hermes Cover export credit guarantees play an important role in Germany’s economic relations with partners in politically unstable regions, including the former Soviet Union. The EU should be keenly interested as well. Absent foreign investment, the flow of illegal immigrants from Ukraine to the EU will only increase, and Ukraine may remain reliant on financial support from the West for many years to come.

FDI guaranteed by western states and multilateral institutions would function as a protective mechanism for Ukraine. Publicly insured direct investments would create a close link between Western financial interests and future destabilizing activity by Russia that should have a calming influence on the Russian-Ukrainian conflict. More numerous Western assets and ventures located in Ukraine—particularly in the Russophone east and south—would create new interdependencies. Moscow would run the risk that investors, owners or insurers affected by Russian military activity, paramilitary actions or secret service operations in eastern Ukraine would attempt to recover financial losses through international courts. There’s a precedent in the former Soviet Union for this: companies could follow the example of ongoing attempts to restore through court orders the losses incurred by the shareholders of Mikhail Khodorkovsky’s Yukos corporation that was fraudulently broken up and seized by the Kremlin.

Strategic western support for Kyiv would have larger repercussions. Sustained Western support for the Ukrainian state and action against Russia’s infringement of Ukraine’s sovereignty would conform to the spirit of the 1968 Non-Proliferation Treaty, the 1994 Budapest Memorandum, and the 2014 EU-Ukraine Association Agreement. Western assistance to Kyiv would strengthen the global mechanisms for controlling nuclear weapons and improve the reputation of the EU’s Neighborhood Policy. It would put the ball back in Kyiv’s court to focus on implementing its proclaimed Europeanization drive. Then it would be up to Ukraine’s government to create the right conditions to attract foreign investors.

Andreas Umland is a Senior Research Fellow at the Institute for Euro-Atlantic Cooperation in Kyiv and General Editor of the Soviet and Post-Soviet Politics and Society book series published by ibidem Press.