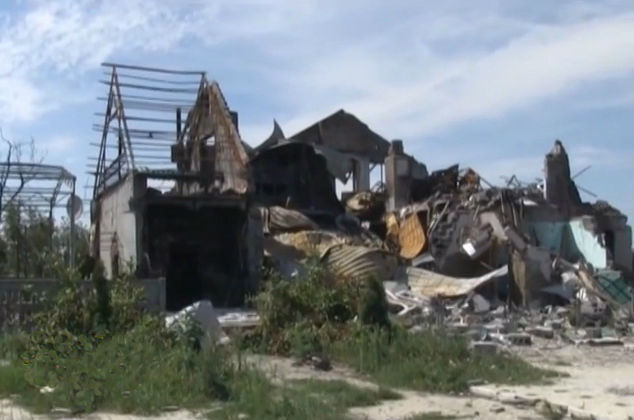 A house destroyed during the war in Donbas on July 22, 2014. The economic and humanitarian situation in the Donbas is truly terrible. Under normal circumstances, both the displaced persons in Ukraine and the impoverished population in the Donbas would be major international concerns of humanitarian assistance. Unfortunately, that has not been the case. The continued fighting is too intense and the legal issues too unclear. Credit: News UTR/Creative Commons

The war in the Donbas is imposing large costs on Ukraine. According to Ukraine’s leading investment bank Dragon Capital, in October 2014 the occupied territories in the Donbas accounted for 2.6 percent of Ukraine’s territory, 7.3 percent of the population, 10 percent of GDP, and 15 percent of industrial production. This output has declined by roughly two-thirds, explaining two-thirds of Ukraine’s decline in GDP in 2014. What will happen to the Donbas economy if the Minsk II ceasefire agreement collapses?

On June 4, Heidi Tagliavini, the Swiss ambassador who has mediated the Donbas conflict, resigned as special envoy of the Organization for Security and Cooperation in Europe (OSCE). Although without drama, her resignation was widely seen as the end of the Minsk negotiation process.

The first Minsk agreements were concluded on September 5 and 19, and the second Minsk agreement on February 12. Formally, they were ceasefire agreements between three parties—Russia, Ukraine, and the OSCE, but also signed by representatives of the so-called Donetsk People’s Republic (DNR) and Luhansk People’s Republic (LNR). Russia is not mentioned in the text, though there is a reference to “foreign troops” that Ukraine understands as Russian troops.

Neither ceasefire took hold, although fighting abated for some time. Both sides blame one another for violating the ceasefire, but since the frontline has moved slowly but persistently westward, it is all too obvious who has mainly violated the ceasefire.

The war in the Donbas has seen three major battles—the massacre of Ukrainian soldiers at Ilovaisk in August 2014, the protracted battle over the Donetsk Airport in fall 2014, and the battle over Debaltseve in February. On all three occasions, Ukraine lost and claims that regular Russian troops played a decisive role.

The economic and humanitarian situation in the Donbas is truly terrible. Observers in the Donbas report that a dozen of competing gangs control the territory. This year, two commanders, Alexander Bednov better known as Batman and Alexey Mozgovoy, were killed in a professional fashion by unknown culprits.

The Donbas is a rustbelt of old mines, steel mills, and chemical factories. Almost all the coal mines and chemical factories are inactive; Yenakievo Iron and Steel Works has slowed its production and Alchevsk has closed. The rebels have blown up railway bridges, complicating bulk transportation.

As a consequence, most of the population has fled. Ukraine claims 1.2 million internally displaced persons, while Russia reports half a million refugees from the Donbas, and the United Nations estimates that some 100,000 have fled elsewhere. If these numbers are reasonably correct, 1.8 million have fled and 1.5 million remain. Apart from some 45,000 fighters, the remaining population largely consists of pensioners and the destitute.

At present, and perhaps for the foreseeable future, the occupied Donbas is not a profit center but a cost center. An important issue in the Minsk II negotiations was who will provide the necessary public expenditures in the Donbas, notably pensions.

Until November 2014, the Ukrainian government did, but Ukraine cannot afford to pay large amounts of public expenses to a territory that it does not control and where it cannot collect taxes. Worse, the rebels have looted banks and ATM machines, rendering it impossible to disburse money there.

The Ukrainian government demands that Ukrainian citizens collect their pensions on territory it controls. This has been complicated by rigorous border control that the Ukrainian authorities claim are necessary to check rebel infiltration.

The local DNR and LNR commanders want to confiscate enterprises in the territories they control, but Moscow won’t allow that. They do collect simple, low taxes from small enterprises that still work, but the revenues are tiny. Since April, the DNR and LNR have started paying Ukrainian pensions and other basic public expenses in rubles. The amounts are so large that the funding must come from Moscow.

The large Ukrainian enterprises that still operate in the occupied territories pay Ukrainian taxes through Ukrainian bank accounts with the support of Moscow. It, too, wants to maintain some orderly economic activity and mitigate the social destitution.

Under normal circumstances, both the displaced persons in Ukraine and the impoverished population in the Donbas would be major international concerns of humanitarian assistance. Unfortunately, that has not been the case. The continued fighting is too intense and the legal issues too unclear.

The costs of the war in the Donbas are great. Ukraine cannot afford these costs, and Russia does not want to assume them. The longer the war lasts, the greater the damage and human suffering. Increasingly, these costs will weigh on the warfare. This might be an important reason why Donbas separatists now claim that the Novorossiya project is over.

Anders Åslund is a senior fellow at the Atlantic Council and author of the book “Ukraine: What Went Wrong and How to Fix It.” This article was originally published in Russian by RBC Daily and has been abridged.