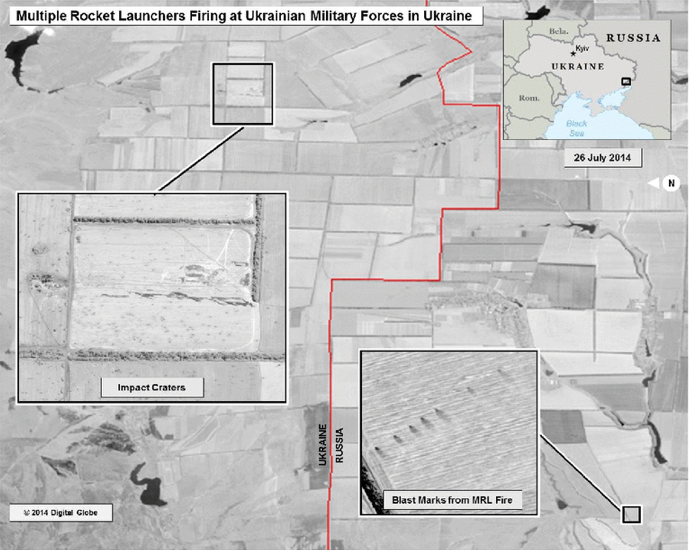 One of several satellite images released by the State Department yesterday depicts what the US government says has been Russian cross-border missile strikes on Ukrainian troops in Ukraine. (State Department/Digital Globe)

The war in Ukraine has heated up significantly in the ten days since the Russian-led and supplied insurgents shot down Malaysian Airlines Flight 17. Ukrainian forces retook the city of Lysychansk from the rebels late last week and have established control over most of their border with Russia. They are advancing on the city of Horlivka, a stronghold of the rebels and a gateway to Donetsk, the principal city of the Donbas region.

The Ukrainians’ steady advance, and the prospect that they might seal the border and cut insurgent supply lines, have led the government of President Vladimir Putin to again escalate its intervention in Ukraine. In addition to keeping up a steady flow of armored vehicles, missile systems and fighters to its agents in southeastern Ukraine, the Kremlin has sent heavy artillery. Russian forces along the Ukrainian border are directly attacking the Ukrainian military with artillery fire. In some locations, Ukrainian forces are under fire by the separatists to their west and the Russians to their east.

For Moscow, Ukrainian gains could not have come at a worse time. The European public’s fury at the destruction of MH17 only grew due to the spectacle at the crash site of an obstructed investigation, the looting of the remains and the carting off of evidence. This is driving ever-cautious European politicians to consider, for the first time, serious sanctions.

Frustrated at European reluctance to consider serious sanctions, the United States has begun to publicize details from its intelligence reporting on the extraordinary Kremlin effort to keep the insurgency viable. This includes the supply of advanced weaponry and the maintenance of a major supply depot for the separatists in Rostov. The State Department today released its most detailed evidence yet, including satellite images, showing Russia’s artillery attacks on Ukraine.

In short, the mask has come off Moscow’s “covert” aggression in Ukraine.

What has become clear over the past several weeks is that, despite years of corrupt leadership and Russian subversion, Ukraine’s security forces have the will and the means to defeat a Kremlin assault that seeks the political cover of pretending to be a local, Ukrainian insurgency. Until this point, Mr. Putin has preferred this notionally “covert” campaign, which lets him issue the formal denials that minimize the risk of Europe imposing major sanctions. But the Ukrainian military gains have forced him into the risky decision to attack Ukraine directly, with his own artillery forces.

The West Must Respond

Moscow will watch carefully to see how the West reacts to this latest crossed red line. If Europe does not join the US now in introducing truly punishing sanctions, Mr. Putin will draw the conclusion that he can get away with the next logical escalation: the introduction of Russian aircraft to take control of eastern Ukraine’s skies, or of more sophisticated tanks.

With Russia’s escalation, it has grown urgent (and already is long past time) for the U.S. and/or NATO to provide the basically defensive military equipment that offsets the armament Moscow has introduced into the conflict. That should include anti-armor, anti-aircraft, and anti-missile weapons. Ukraine also desperately needs Western intelligence support. With the right combination of major sanctions and military equipment, the West will help Kyiv defeat Mr. Putin’s dangerous adventure. Anything less invites trouble, not just in Ukraine, but elsewhere on Russia’s periphery where Russian speakers happen to reside.

John E. Herbst is director of the Eurasia Center at the Atlantic Council. He served as the US ambassador to Ukraine from 2003 to 2006.