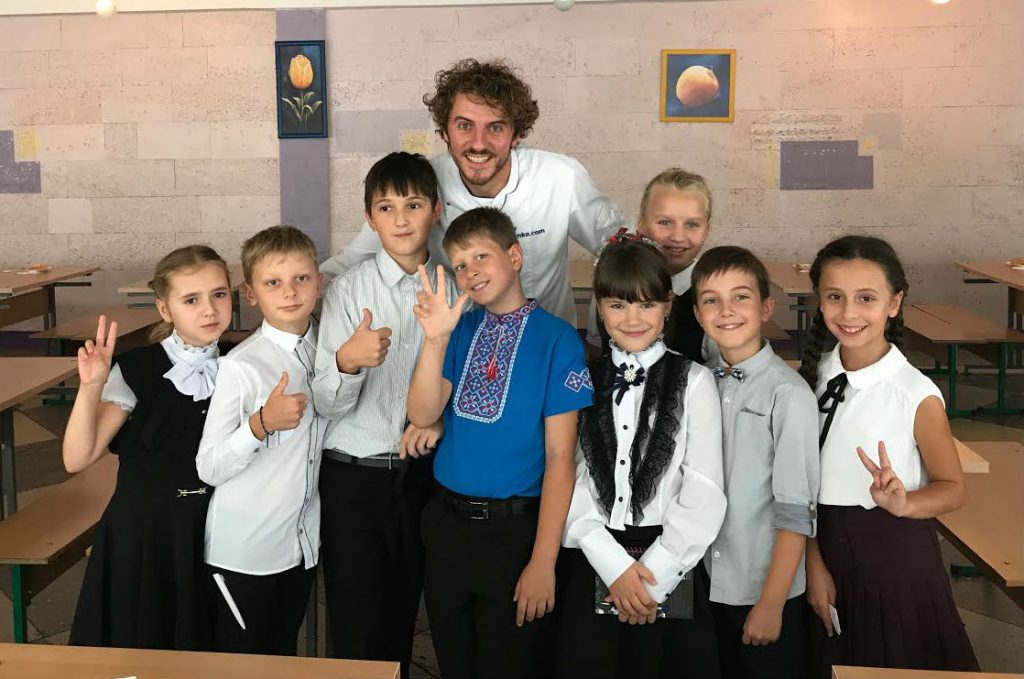 A successful entrepreneur, graduate of the prestigious Le Cordon Bleu in Paris, winner of a popular cooking show, social media influencer, and brand chief at several Kyiv restaurants, it would seem that thirty-one year old Ievgen Klopotenko has it all. However, few know that his most ambitious plan isn’t about business. He wants to change the food culture of Ukraine. And the first step, he believes, is reforming the catering system in Ukrainian schools.

“One could wonder why I don’t use time devoted for this project for leisure or doing business,” laughs Klopotenko. “But I still remember the horrible taste of goulash at the school canteen. Eating at school was pure torture. Besides, I really hate the Soviet Union and everything about it. The school catering system in Ukraine is nothing but Soviet.”

As a child, Klopotenko was exposed to international cuisine when his grandmother moved to England and he spent a few weeks in Italy on an exchange program.

After his travels, he returned to the “world of harsh reality,” or the school cafeteria. Klopotenko admits he used to sprint across the street to grab a sandwich at home, but his mother, the head teacher, sat next to him, forcing him to eat “hateful liver” instead.

Klopotenko is absolutely right. It is hard to imagine, but in the twenty-seven years since Ukraine became independent, no one has made any changes to the recipes governing school canteens. Even worse, the official cookbook that school cooks are obliged to follow hasn’t changed since 1957.

The system needs a change, but not only because of its age. It is simply not tasty, nor is it healthy.

Klopotenko isn’t the only one with nightmares of the school canteen; I couldn’t find anyone who said they enjoyed school lunches. Children spend half of their day at school, so if they aren’t eating at the canteen, they are eating snacks—that is, baked goods or sweets, which should not be the foundation of a schoolchild’s diet.

To understand the scale and seriousness of the issue, one should keep in mind that we are talking about almost four million Ukrainian pupils. And Klopotenko has a plan for all of them.

He started from the basics, from the official cookbook for school cooks. “A new cookbook for schools is a starting point… I studied all the ingredients that are used at school canteens and simply improved the recipes. Even the simplest dish can be made tasty and visually appealing. For example, I took the most basic salad with cabbage and added few grams of sunflower seeds. Simple? Yes. But it gives it an absolutely new taste.”

Klopotenko really cares that children like the new menu. After he updated all of the school recipes, he went to several test schools where kids could try them. He cooked everything for them himself; he spoke to children and asked their opinions. “After their feedback, I updated the recipes again based on what they like most and what dishes…the children don’t even touch.”

Now Klopotenko is trying to get the book approved and allowed for use at schools. “The situation is rather peculiar. Since even those who tried to make some changes never went so far [as we have], there is no clear way how to do it. No one [has] cared about changing old Soviet regulations.”

Klopotenko sees it as both a challenge and an opportunity. He says he knows what to do next but doesn’t want to reveal more details since he has several plans for securing the state’s approval.

Although confident he will succeed, Klopotenko is ready to fight if needed. “There are many adequate people in Ukraine, in the state institutions too. But if their goodwill won’t be enough, I am ready to fight for the project publicly using the power of social and traditional media,” says Klopotenko, adding that he is building his media presence for this effort. “I’m on TV not just for fun. I perfectly understand now that my team and I are growing a ‘muscle’ to push a project.”

Publicity is also needed for another step: to popularize this new book in schools. “We will make special videos explaining to cooks how to cook new dishes. We will make the book available online so every parent can consult it and become our ambassador in their schools. We will tell children about new dishes and how important good food is. Every time children are eating in school canteens now, they are consuming Soviet culture and Soviet attitudes. This must change. I want to open them to new tastes and new food.”

Klopotenko sees this project as a major step in improving food culture in Ukraine. “After schools, kindergartens will follow. And after that, I want to change the entire system of public eating.”

Those aren’t just words: Klopotenko also teaches at one of Kyiv’s cooking colleges, is preparing a new cooking methodology and collection of recipes for students, is working on a book about Ukrainian traditional cuisine, and is getting ready to open his own restaurant in Kyiv.

“I want to show Ukrainians what our cuisine could be if the Soviet Union [hadn’t] come and destroyed it.”

Kateryna Kruk is a Ukrainian political scientist and communications expert fellow at StopFake and the European Values Think Tank. In 2014, the Atlantic Council awarded her its Freedom Award for communicating the Euromaidan Revolution to the world via Twitter. She tweets @Kateryna_Kruk.