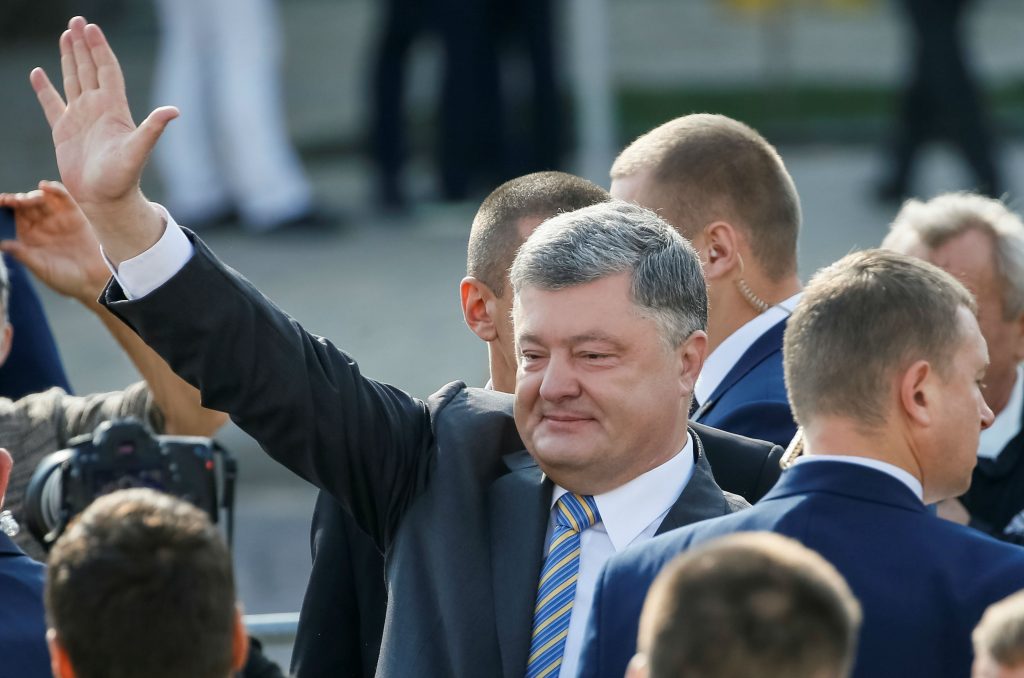 Ukraine's President Petro Poroshenko waves to audience after a ceremony marking the Day of the State Flag, on the eve of the Independence Day, in Kyiv, Ukraine August 23, 2017. REUTERS/Gleb Garanich

Democracies guarantee freedom of speech for their elected politicians by granting them immunity from libel or slander for statements made inside their legislative chambers. This privilege was established centuries ago in Britain to protect the people’s representatives from the monarchy, House of Lords, and other powerful vested interests.

Ukraine, on the other hand, has perverted this principle by guaranteeing elected officials complete immunity from civil or criminal prosecutions unless a majority of its 450 deputies allow charges to be laid. The significance of this cannot be overstated. This is impunity, not parliamentary immunity, and has been a license for up 450 people and their sponsors or allies to break laws and loot the country.

Every election cycle Ukraine is for sale to the highest bidders. This year, the estimated cost (bribes) required to get a seat is roughly $2 million, according to insiders. Theoretically, the country could be “bought” for about $900 million, or $2 million times 450 deputy seats. It’s a bargain because parliamentarians are above the law and also have access to the national purse and government contracts.

This perversion underpins Ukraine’s rotten and rigged polity, and its blanket immunity must be eradicated before the 2019 elections, or it will be monkey business as usual. Of course, most believe the possibility of that happening are like believing opposition leader Alexei Navalny will beat Russian President Vladimir Putin this spring, but, believe it or not, cautious optimism may be appropriate.

“Lifting immunity would be one of the most understandable policy initiatives to Ukrainians because it shows how unfair the system is,” said reformer Vitaliy Shabunin, head of Ukraine’s Anti-Corruption Action Center, in a recent interview. “And I think it will happen.”

Of course, not all seats are bought and not all parliamentarians are crooks, but most are and this is why. Half of parliamentary seats are held by those elected to represent specific jurisdictions, and voter bribery is rampant even though illegal. These bribes are financed by oligarchs or accomplices, and once elected these parliamentarians work for their benefactors and themselves, not for their constituents.

The other half of Ukraine’s parliamentary seats are held by those who were appointed to party “lists.” Corrupt parties sell these seats to oligarchs and appoint their chosen candidates (who are sometimes celebrities or reformers). In return, parties get millions in cash or contra such as free commercials on oligarch media outlets to get their roster elected.

The result is that oligarchs directly control more than one-third of all parliamentary seats and indirectly control enough more to provide a majority. By contrast, there are only three dozen reformers in Ukraine’s parliament, or roughly eight percent.

Fixing Ukraine’s Potemkin parliament by stripping away its immunity should have been the first action in 2014, but wasn’t. However, Shabunin actually believes that a good outcome is possible, based on Petro Poroshenko’s desire to be reelected.

“He [Poroshenko] won’t have solid things to build his reelection campaign on, but the limitation of parliamentary immunity is tangible and understood by all Ukrainians. Strategically, it would also be a good maneuver against Yulia Tymoshenko, and other factions, who won’t support it. They will be punished by voters,” said Shabunin.

The first hopeful sign came in October during mass protests in Kyiv, calling for an independent anticorruption court and other reforms. The president announced an initiative to remove immunity and the next day tabled a draft law which, Shabunin said, “was a good draft” to be sent to the Constitutional Court for review. Hours later, some 330 members of parliament approved this referral and second and third readings should be completed by the fall.

“Polls show that there is huge support for this. It’s a very simple issue. It would be political suicide to not vote for this for any of them and that is why burying it won’t happen,” said Shabunin.

If Poroshenko also creates a viable anti-corruption court and convicts a few high-profile individuals before the 2019 presidential election, he will win handily. Ukrainians are more concerned about corruption, according to independent polls, than the war with Russia.

Eliminating parliamentary immunity would be the anti-corruption equivalent of obtaining lethal defensive weapons against the Russians. And the United States, European Union, and other Western donors must double-down and demand this be done this year, not in 2020 as Poroshenko proposed.

Fish rot from the head down and the only way to bring prosperity, democracy, and justice to Ukraine is to turn the Rada into an institution for the people, not for the elites.

“If immunity is gone, the motivation or gold rush would be finished and the only people who will run for parliament will be those trying to pass laws that will do something for the country rather than those who have business meetings and sell their votes by sitting there,” said investor and Kyiv Post Publisher Mohammad Zahoor.