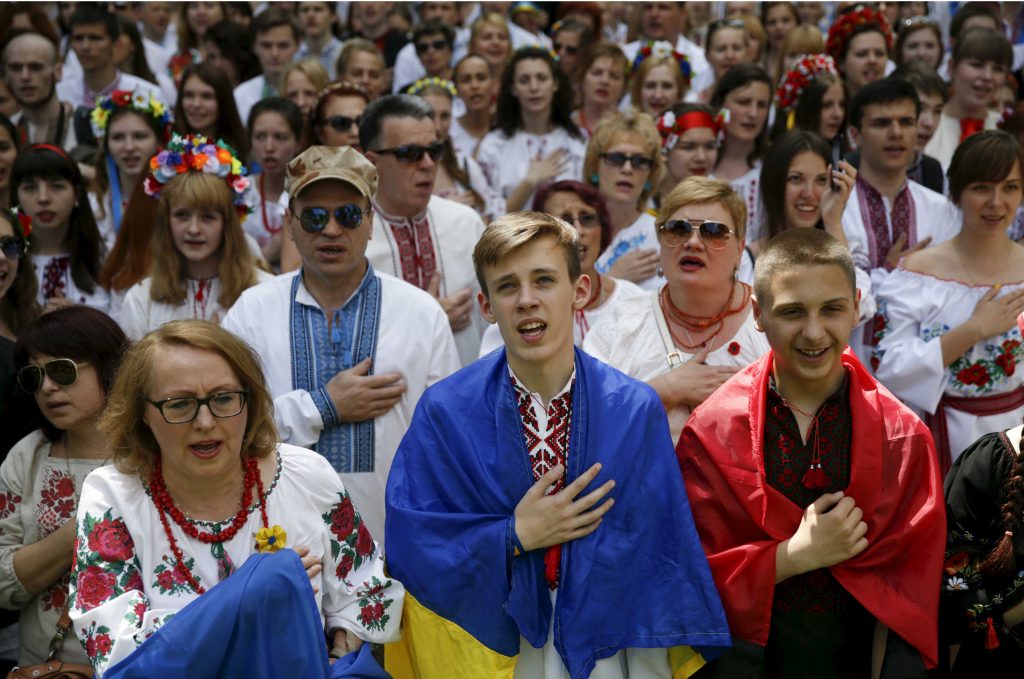 Ukraine became an independent country in 1991, but it took the outbreak of war in 2014 to forge it into a fully-fledged nation. As is often the case with major historic shifts, this change was not immediately apparent at the time. Even now, three years on, it may come as news to the millions of Ukrainians struggling to make ends meet while dealing with a largely unreformed state bureaucracy. Nevertheless, it is increasingly apparent that the traumatic and triumphant events of 2014 represented a national coming of age. We are now witnessing the Ukrainianization of Ukraine.

Evidence of this national evolution is all around. It is visible in the multitude of Ukrainian flags on display, and in the popularity of anything carrying the “Made in Ukraine” label. You can see it in the enthusiasm for holidays like Vyshyvanka Day and the embrace of national motifs. It has even permeated people’s sense of self. An April 2017 survey found that 92 percent of citizens now consider themselves ethnic Ukrainians—up from 78 percent at the time of the last census in 2001.

Most of all, this growing national consciousness is epitomized by the thousands of volunteers throughout the country who have given their time, talents, money, and in some cases their lives for the sake of a better Ukraine. Crucially, these trends are evident across Ukrainian society. Russian-speaking Ukrainian patriots are central to Ukraine’s new sense of national identity, while Muslim Crimean Tatars are among its most passionate advocates.

Ukraine was not always like this. In the 1990s, national pride was a relatively rare commodity. Large swaths of the population were indifferent to ideas of Ukrainian identity, preferring to think in terms of the Soviet collective while dismissing independent Ukraine as an accident of history. Many Ukrainians remained stuck in routines established during the Communist era: they got their news from Russian TV and took their lead from Moscow on everything from fashion trends to business practices.

In retrospect, the first signs of a coming national awakening were evident long before 2014. The 2004 Orange Revolution was a watershed moment in Ukraine’s journey toward genuine nationhood. The revolution ended in political failure, but it inspired Ukrainians to see their country in a new light.

Demographic shifts have also played an important role. Since the mid-2000s, a new generation with no personal experience of the shared Soviet past has reached adulthood. To them, there is nothing artificial about Ukrainian statehood. Indeed, it is all they have ever known.

The shock of Russia’s 2014 attack was the catalyst for a radical acceleration of Ukraine’s post-Soviet nation-building process. Putin’s hybrid war posed a direct threat to the existence of the Ukrainian state and forced every Ukrainian to choose sides. To the surprise of the Kremlin, the vast majority chose Ukraine. This was not about politics or geopolitics—it was an affirmation of Ukraine’s fundamental right to exist. Not everyone joined in this epiphany, but the numbers were enough to prove decisive in preventing Russia’s hybrid war from spreading beyond its initial foothold in the Donbas borderlands. The Ukrainian nation had faced the ultimate test and survived.

Since 2014, the Ukrainianization of Ukraine has continued to gain ground despite a toxic cocktail of war weariness, economic gloom, and political corruption. Civil society remains indefatigable in its efforts to pursue reforms and hold elected officials to account. The terrible human costs of the conflict have touched communities across the country, stiffening resolve to make sure these sacrifices are not in vain. These shared experiences have created a sense of common cause throughout Ukrainian society.

The information environment has also become strikingly more Ukrainian in character. Since 2014, the country has made huge strides toward reclaiming control over its own information space. Russian TV channels can no longer broadcast in Ukraine, while Ukrainian channels are restricted in their ability to use Russian-produced content. Meanwhile, new quotas obliging Ukrainian TV channels to dedicate 75 percent of airtime to Ukrainian-language broadcasting will spur the growth of the domestic entertainment industry and further Ukrainianize the country’s information landscape.

The recent ban on Kremlin-controlled social media is also an important step toward Ukraine’s information independence. As well as weakening Russia’s ability to wage information war, it forces Ukrainians to move beyond the confines of the post-Soviet comfort zone. The millions of Ukrainians who used Russian social media did not do so for political reasons. They acted out of habit, just as they routinely watched Russian TV. These habits kept post-Soviet Ukrainians psychologically anchored inside the Russian world and paved the way for the tragedies of Putin’s hybrid war.

Ukraine’s efforts to limit Russian access to the country’s information space have been widely criticized as incompatible with the European values espoused during the Euromaidan, but there can be little doubt that the pre-Maidan status quo was akin to an informational occupation. With Kremlin influence now curtailed, Ukraine must rise to the challenge of creating a media landscape capable of catering to the needs of all Ukrainians.

Where is Ukraine’s national awakening leading the country? Cynics will point out that patriotism usually does not improve living standards and can often have the opposite effect. Indeed, the Ukrainianization of Ukraine is a fascinating phenomenon, but it will not cure the country’s ills or make the population magically content to receive meager salaries and substandard state services. However, it is a prerequisite if Ukraine is to succeed as a modern European nation. A shared sense of identity is essential for the cohesion of any national community, and this was long lacking in post-Soviet Ukraine. Now the country has a fighting chance.

Peter Dickinson is the publisher of Business Ukraine and Lviv Today magazines. He tweets @Biz_Ukraine_Mag.

Image: People dressed in traditional Ukrainian clothing vyshyvanka sing the national anthem as they take part in "March in vyshyvankas" in Kiev, Ukraine, May 24, 2015. REUTERS/Valentyn Ogirenko