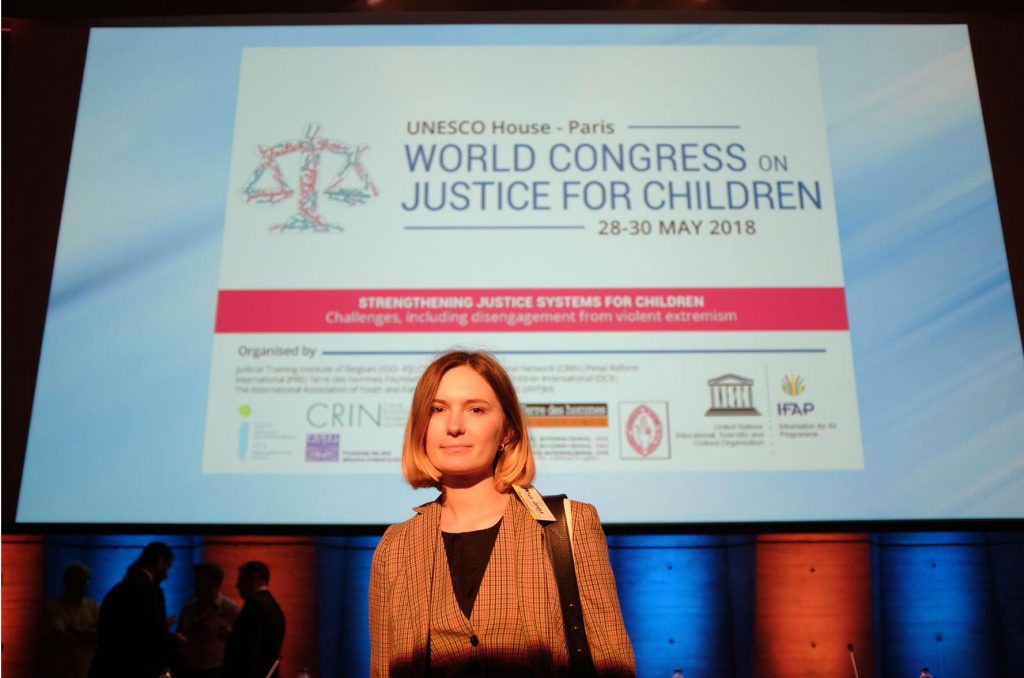 The Atlantic Council has been profiling some of Ukraine’s toughest but lesser-known female activists this summer.

When I spoke with Iryna Shyba, a leader with the DEJURE Foundation in Kyiv, Ukraine, she almost rejected the premise of the piece.

“I don’t feel like I am doing more than any other civil society activist,” Shyba said. “There are incredible females working every day in IT and science, and to fight corruption. One day there should be no special column about women working on important issues; there should just be a column about anyone working on these issues.”

You know you’ve found a good subject to profile when they don’t want the spotlight.

Just shy of her twenty-sixth birthday, Shyba is a senior project manager at DEJURE, a non-governmental organization focused on judicial reform.

Giving children access to justice, establishing an anticorruption court, and overhauling Ukraine’s judiciary may seem like a daunting portfolio, but for Shyba and her colleagues, confronting these issues is at the core of their everyday work.

Shyba originally envisioned a career in economic development and trade and holds degrees in both law and economics. Yet she discovered a passion for activism while studying abroad and then made it her life’s work upon returning to Ukraine.

Like most civil society leaders today, the Euromaidan sparked Shyba’s involvement in activism. While she was studying in Europe, she constantly answered questions about the political situation and ongoing war in the Donbas back home, and so her awareness of, and participation in, politics grew. Shyba participated in a tour with Democrats 66 (D66), a social liberal party, around the Netherlands, and advocating in favor of the Dutch Ukraine-European Union Association Agreement referendum instilled in her a sense of purpose and desire for reform in Ukraine. The transparency and accessibility of politics in Europe opened Shyba’s eyes to another side of politics, in contrast to the familiar “dirty” and “corrupt” game at home. Shyba realized that she could influence government without being directly involved through civil society.

In 2016, Shyba (left) campaigned in favor of the Dutch referendum on the Ukraine-European Union Association Agreement.

Her first big break came through an internship with one of the largest civil society organizations in Kyiv, the Reanimation Package of Reform (RPR), after attending their three-month program called Open University of Reforms. There, Shyba realized that she could make a larger impact in the civil society sector, specifically in the judicial reform field, than in economics.

“Justice can’t be reached in Ukraine without reforms made in a democratic way,” she said. Shyba aspires to create in Ukraine the openness she had observed in the Netherlands.

There was much to do. There is no systematic law on justice for children and Ukraine’s legislation is not aligned with international standards because there is no proper coordination between institutions that work with children. “When the police arrest a child, they don’t know who to inform. The government does not consult with institutions and civil society when developing laws,” she said.

The lack of coordination between government and civil society has always confounded Shyba, and she has sought to develop stronger links between the two. Plus, there is a distorted public perception of juvenile justice in Ukraine, with legal action often thought of as children being taken away from their parents.

To remedy these problems, Shyba and DEJURE helped establish an interagency body to unite civil society organizations and government, and are hoping to implement a new National Human Rights Strategy within the year.

“The criminal system is more focused on punishment than on rehabilitation, the compensation of harm, or the restoration of social ties,” Shyba said. Their work focuses on the importance of mediation and restorative justice to divert children from the criminal system, a concept that can be applied to juveniles and adults.

As this initiative nears completion, Shyba and DEJURE have turned their attention to cleaning up Ukraine’s courts. DEJURE wants greater oversight of the selection process for new judges through its three-year plan to analyze and control competition to judicial positions and to provide recommendations to government. DEJURE also continues to support the Public Integrity Council, an expert civil society group that helps vet judicial candidates, in providing information to the public about candidates.

Shyba is “not necessarily a feminist,” but she fights for equal rights for women and men. As a young woman working in a field traditionally dominated by males with years of experience, she has faced discrimination both working as a lawyer and as an activist. “Before I would go to meetings with senior colleagues and people would not address me. You need a lot more time to prove yourself,” Shyba said. While her role with DEJURE has provided her with increased visibility and connections, silencing skeptics, Shyba still finds that it takes longer to convince people of her expertise.

Shyba plans to stay in Kyiv, and with the DEJURE Foundation, for at least the near future. She is passionate and humble about the work she has done, especially given her success in juvenile justice reform, and one to watch.

Mary Trichka, an intern with the Atlantic Council’s Eurasia Center, is a student at Middlebury College where she studies political science and Russian. This story is the third in a series about women leaders in Ukraine’s civil society who are making a difference in the reform fight. Read the first story here and the second here.