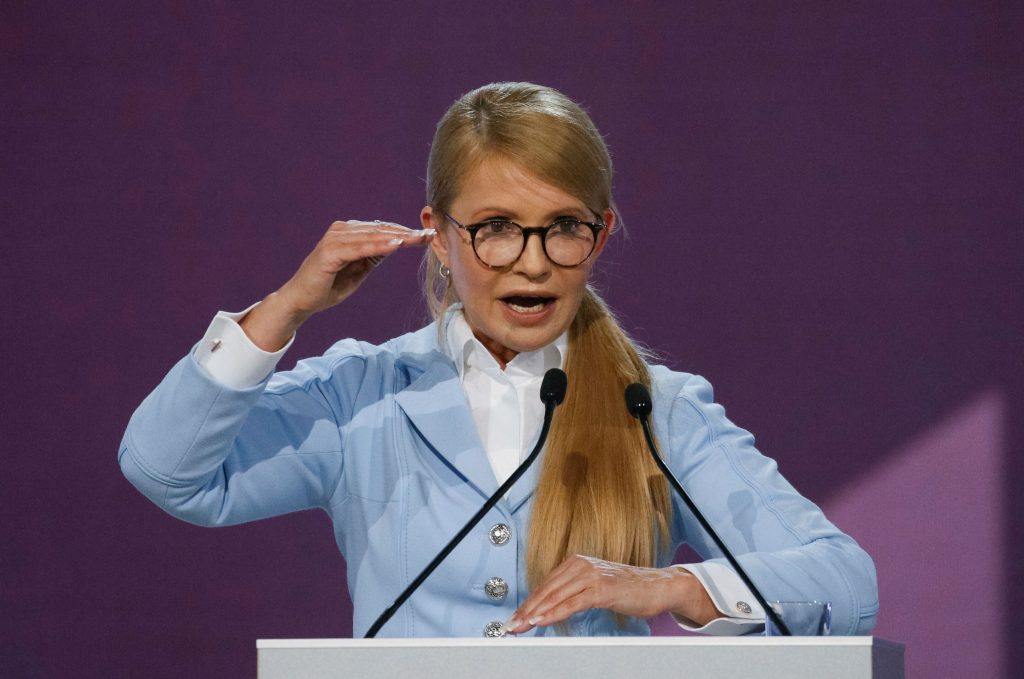 On June 20, Yulia Tymoshenko officially announced that she’s running for president, which is no great surprise. The former prime minister tops the polls and it’s her race to lose.

A week prior, Tymoshenko held a summit with 5,000-6,000 participants in Kyiv to announce her vision. There she underlined the necessity for a “technological revolution” along with fundamental reforms, urging Ukraine to speed things up or risk being stuck one hundred years behind the modern world.

In her two-and-a-half-hour long marathon speech, she called Ukraine’s Constitution not ideal and wants Ukraine to become a parliamentary republic. Tymoshenko offered to serve as “chancellor,” following the example of the most successful Western countries with parliamentary systems.

Her “New Course of Ukraine” rally marks the beginning of Ukraine’s presidential campaign. The election is scheduled for March 31, 2019 and followed by fall parliamentary elections. There’s little doubt that the next president will not only determine the future of Ukraine for the next five years but also play a key role in the composition of the country’s next parliament.

According to Vitalii Kulik, a Ukrainian political expert who attended Tymoshenko’s speech, most of her messages were lifted from civil society activists. This is not Tymoshenko’s natural base. She tends to appeal to pensioners rather than technocrats. According to Kulik, “she manipulated a number of modern words which were offered by Tymoshenko’s campaign strategists” and she didn’t seem to believe her own presentation.

Three messages stuck out to me. First, Tymoshenko wants to fight corruption through “block chain” technology which makes it more difficult to distort the policymaking process and voters. Second, she wants to shrink presidential power and give it to the prime minister who is elected by parliament. Ukraine would become a parliamentary republic with less authority than the president currently has. Third, she argued for a social contract between the government and the people.

Through these messages, Tymoshenko is trying to engage Ukrainian civil society and undecided voters in her campaign. Undecided voters are important. They make up close to 40 percent of voters.

Despite Tymoshenko’s long speech, many questions still remain. For example, who sponsored the event and why wasn’t there any print version of her presentation or electoral program? Which oligarchs and local businessmen fund her? While Tymoshenko was alone on stage, who will make up her team?

While Tymoshenko leads in the polls with 24.6 percent, there are no guarantees.

Tymoshenko has been in politics for almost twenty years, and she’s lost a lot, which may make her campaign tactics more desperate than normal. This is probably her last chance to run for president.

In 2005, she was sacked as prime minister for fighting with President Viktor Yushchenko.

In 2010, she lost the presidential race by 3 percent and then went to jail on trumped-up charges.

But it’s not going to be easy. Tymoshenko has two main challenges to overcome. First, she needs to explain why she tried to cozy up to disgraced pro-Russian Party of Regions leader Viktor Yanukovych in 2009. She wanted to create a broad coalition with him in parliament that failed at the last minute.

The second problem is better known abroad. As prime minister, Tymoshenko signed a controversial gas deal with Russia which significantly increased the price of Russian gas from $250 to $450 per thousand cubic meters. Ukraine was paying some of the highest gas prices in Europe.

Attack ads are likely to focus on these two issues.

To win, Tymoshenko must reconcile her political past and future since current circumstances require her to completely change as a politician and personality.

And it seems she is.

Ukraine’s elections next year will be unpredictable and tense, and they matter enormously. With Ukraine on the dividing line between Europe and an increasingly bellicose Russia, we should expect Moscow to meddle through outright support of candidates, hack election results, and stage violence to discourage turnout. The Kremlin will play its dirty tricks and then some.

But keep your eye on Tymoshenko and incumbent President Petro Poroshenko. This is likely their last run for president, and both are formidable on the campaign trail.