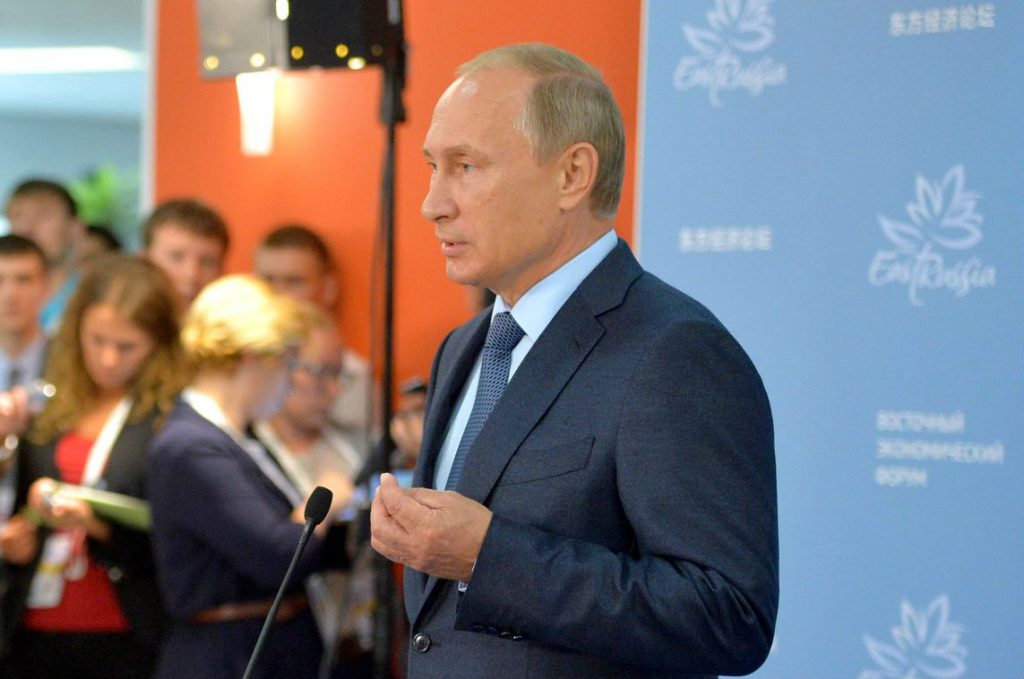 No, I’m not talking about the possibility of Ukraine not being able to renegotiate lower gas prices this year. (That’s another issue entirely).

The kind of freeze that Putin is plotting for Ukraine is political. For more than a year, he has been deploying troops to eastern Ukraine to assist Russian-backed rebels to destabilize the country. And it’s working.

Despite Kyiv working out a deal with creditors to reduce its $18 billion debt, its economy has been decimated by Moscow’s proxy war. It’s GDP has shrunk by 7 percent since 2014 (It’s projected to shrink by 10 percent if things go well this year), more than forty banks have gone bankrupt, and inflation exceeds more than 60 percent. The human toll has been enormous. More than 6,800 people have died in the fighting; most of the victims are women and children. At the end of June, there were officially 1.35 million internally displaced people in Ukraine. The United Nation’s Office for the Coordination of Humanitarian Affairs says there are 2.5 million people displaced by Russian aggression in Ukraine. That’s more than during the war in Bosnia.

All of this is great news for Putin.

For years, he has wanted to keep Ukraine in Russia’s sphere of influence. When Ukrainians pushed former president Viktor Yanukovych to sign the European Union’s Neighborhood Agreement in 2013, Putin threatened Ukraine with tariff and trade checks. Yanukovych refused to sign the EU agreement, and Ukrainians quickly revolted. Had Putin not intervened, Ukraine likely would be on a long, but inevitable road to EU membership. For now, the sight of official EU flags flying from government buildings in Kyiv seems decades away.

That’s because Ukraine is stuck in a geopolitical limbo in which Putin has as much influence in the country’s affairs through proxy than elected officials in Kyiv have by way of constitutional authority. The road to a stable Ukraine leads to Moscow, not Kyiv or Brussels. Ukraine is geopolitically frozen in time.

Putin had Georgia in a political freeze of its own, up until a few years ago. Before Russia invaded Georgia in 2008, the country’s western-leaning government was crafting reforms that were leading it to signing the EU association agreement quickly. When I was in Tbilisi in 2008 as a graduate student, it looked nothing like the chronically corrupt country I remembered from my days as a Peace Corps Volunteer between 2003 and 2005. Mikheil Saakashvili had spent his first term and a half rooting out corruption and pulling Georgia out of Moscow’s uncompromising grip. But when Russian forces invaded Georgia in August on the flimsy accusation that Russian citizens in South Ossetia were under attack, it crippled the nation’s economy and threatened its national security outlook, making it less appealing for NATO membership. Georgia has since signed an EU association agreement, but that deal could have been inked years earlier had Russia decided not to bully its neighbor.

The West did little to make Putin pay, leading him to believe that his expansionism could go unchecked.

While Georgia has rebounded from its war with Russia, South Ossetia and Abkhazia are frozen in Putin’s favor now more than ever.

Long before Putin had his eye on Tbilisi, he was sinking his encroaching heels deep into Transnistria. A sliver of land in Moldova that borders Ukraine, the autonomous republic is led by Putin loyalists who, like the separatists in eastern Ukraine, want to solidify its independence with Russian intervention. When Chisinau signed its EU association agreement last year, Russia boosted trade with Tiraspol in defiance. Transnistrian smugglers have been accused of supplying weapons to separatists in nearby Odesa. Given that 1,500 Russian “peacekeeping” troops are already in Transnistria, the region may be ripe for the kind of proxy war Russia is waging in Ukraine. After Russia recognized Crimea as an independent state, Transnistria called on Moscow to grant its citizens Russian citizenship. At least 30 percent of Moldova’s residents are ethnic Russians, and some analysts have speculated that Putin might pull the kind of invasion there he led in South Ossetia.

If Putin does this, it would destabilize yet another eastern European country, threatening the Europe’s national security and, eventually, that of the US.

How can Washington and the EU stop such expansionism?

Showing Putin that we’re still serious about curbing his overreach in Ukraine would be a great start. After the sanctions expire Dec. 31, even stiffer sanctions targeting Russia’s banking sectors should be put into place. Russia’s economy is heavily dependent on its energy sector. While it is understandable that Europe, which relies on Russian oil and gas, would be nervous to ratchet up any energy sanctions it’s already levied against Moscow, Washington should figure out ways to pinch the sector even harder. According to The Wall Street Journal, sanctions are hurting a Russian oil firm’s efforts to finance its $27 billion Arctic Circle project. Washington should look for ways to sanction access to western technology to complete such projects. In the meantime, the US should arm Ukraine with lethal weapons. There is strong, bipartisan support for this in Congress. For those who say that it would provoke Putin, consider this: Russian troops are already in Syria, reportedly supporting Syrian President Bashar al-Assad with arms and participating in military operations. Putin’s acting this way in Syria because he’s met no resistance in Ukraine. If we keep doing nothing, the result will be more aggression, not less.

Sen. Lindsey Graham has called for another round of sanctions against Russia, which is the right move. “What [Russia is] doing is making America less safe [because] the launching pad of the next 9/11 is Syria.”

I agree. Putin is a geopolitical bully and the only thing bullies respond to is force. Not the current sanctions that Putin, so far, seems to think are nothing more than a slap on the wrist.

Unless the West draws a clear line in the sand that Putin fears encroaching, Ukraine won’t be the only country in Europe under Putin’s tundra.

Image: Russian President Vladimir Putin answers questions from Russian journalists on September 4. Putin is a geopolitical bully and the only thing bullies respond to is force. Not the current sanctions that Putin, so far, seems to think are nothing more than a slap on the wrist. Unless the West draws a clear line in the sand that Putin fears encroaching, Ukraine won’t be the only country in Europe under Putin’s tundra. Credit: Kremlin.ru