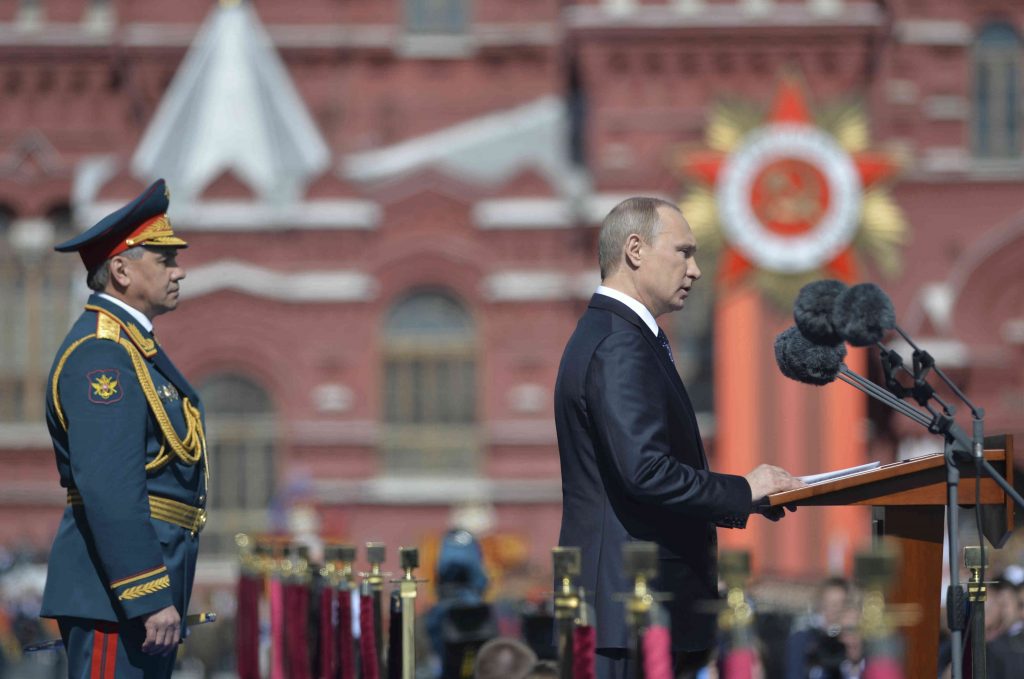 Russia's President Vladimir Putin (R) delivers a speech as Defence Minister Sergei Shoigu stands nearby during the Victory Day parade at Red Square in Moscow, Russia, May 9, 2015. Russia marks the 70th anniversary of the end of World War Two in Europe on Saturday with a military parade, showcasing new military hardware at a time when relations with the West have hit lows not seen since the Cold War. REUTERS/Host Photo Agency/RIA Novosti

“Russia and America: Stumbling to War,” a recent National Interest article by Graham Allison and Dimitri Simes, commands attention because of the gravity of the issue and the stature of its authors. Allison is a leading authority on great power relations, and Dimitri Simes is a scholar with deep connections to the elites running Russia.

The main thrust of the article appears to be a strong note of caution to Western, especially American, policymakers. Russia is a great power that fell on hard times during which, its elite believe, the West took advantage of and disrespected it. This explains why Russia is lashing out in Ukraine now. The authors warn the West against pushing Moscow into a corner because we cannot be sure how the Kremlin might react. They take seriously Moscow’s frequent references to its nuclear power as an instrument to protect its interests and influence Western policy.

The Urge for Caution
The article provides a wealth of historical examples of nations stumbling into wars they did not want because of assertive policies. The authors reference World War I, where, in their view, the British should have understood Austrian anxieties about the Serbs and World War II, where the US should have understood that an embargo on Japan would lead to war. The authors also cite more examples of blundering American policy—from Afghanistan and Iraq to Libya—as evidence of policymakers not understanding the consequences of their actions.

But the historical record is not always on their side. To cite a crucial example, French and British weakness in the face of Hitler’s multiple aggressions led to war when Germany was strong.

The Official Russian View of Things: Putin’s Position Is Firm and the Potential Replacements Worse

Allison and Simes’ analysis suffers from a number of flaws. First, their argument is based not just on their admittedly extensive and impressive professional experience, but also recent discussions with senior Russian officials and the Moscow elite. Given the sources, much of what they have to say about the crisis reflects the narrow set of views that are acceptable in Russian President Vladimir Putin’s increasingly authoritarian Russia. The authors do not offer other sources for interpreting Kremlin behavior, nor do they provide their own analysis. So we should understand that the value of this article is bringing to Western readers the views of Kremlin-approved elites.

The views may be accurate, but they were designed to help persuade the West to avoid policies that would interfere with Kremlin designs in Ukraine and elsewhere in Europe and Eurasia.

Their argument rests on three assertions popular in Moscow’s official precincts. First, Putin is in control in Russia and the only alternative to him are “hardliners.” Second, the Russian people overwhelmingly support Putin and economic sanctions will not deter Putin or weaken his support at home. And finally, providing arms to Ukraine is risky because it might provoke a harsh, unpredictable Kremlin reaction.

An Alternate View: Putin’s Precarious Domestic Position
If Allison and Simes talked with a wider circle of Russians and looked closely at events in Russia, they might come to the conclusion that significant parts of the Moscow elite— oligarchs and technocrats at least—are concerned about Russia’s isolation and the impact of Western sanctions. These groups understand that, in tandem with low prices for hydrocarbons, the sanctions are damaging the Russian economy and limiting their own possibilities. Yes, the authors are right that the siloviki in Moscow—in the Federal Security Service (FSB) and the military—and the Chechen forces under Ramzan Kadyrov are the most powerful players in Moscow at the moment. But the rising pressure on Russia is bringing to the fore breaks in their unity.

These fissures were evident in the peculiar events surrounding the murder of opposition activist Boris Nemtsov in February. While Putin disappeared for 12 days in March, the FSB accused the Chechens of the murder. When Putin reappeared, he gave an award to Kadyrov and appeared with Kremlin Chief of Staff Sergei Ivanov, who is close to the FSB. In the opaque society of the siloviki, we cannot know with certainty what these developments mean, but it is clear that there is something less than unity at the top. And policy failures can provide opportunities for ambitious men to maneuver against their leaders and rivals.

The fact that the men around Putin at the moment favor hardline policies does not tell us what policies they would advocate if Putin were vulnerable. In the pursuit of power they would adopt the policies that they believe would advance their aims. It is worth recalling that after Stalin’s death, one of the most odious of his henchmen, Lavrentiya Beria, was pushing for an ease in relations with the West.

And we should make no mistake about it, in Russia, Putin’s grand Donbas adventure does not look like a winner. There was no rising of the indigenous population against Kyiv. After the easy gains in the spring of 2014, the Ukrainian military launched a successful counteroffensive that took Russian troops to stop. Russian gains since then have been slow and incremental and cost numerous casualties, including to Spetznats units, at Donetsk Airport and Debaltseve.

Contrary to the authors, the growing number of Russian causalities will likely have an impact over time on Putin’s support at home. Putin’s popularity was forged by economic prosperity that was the result of sound fiscal policies and rising hydrocarbon prices. Years of low or no growth will likely reduce his support. The polls that show overwhelming Russian support for the annexation of Crimea were based on questions that claimed that there was no cost to Russia for the annexation.

Putin’s Aims
Allison and Simes shy away from describing Putin’s objectives. They discuss at some length the Russian elite’s anger at the indignities allegedly foisted upon them since the end of the Cold War. These indignities include the expansion of NATO eastward and Obama’s referring to Kremlin policies and actions as a scourge on par with the Islamic State of Iraq and al-Sham and Ebola. But nowhere do the authors venture what Putin might be after with his aggression in Ukraine. Despite numerous efforts by various Western interlocutors eager to help Putin find an off-ramp for this crisis, the Kremlin has yet to lay out its requirements for peace. This is a standard negotiating tactic to prompt your opponents to fall over themselves in offering concessions. It is not the path to peace.

Numerous statements by Putin, senior Kremlin officials, and Russian actions however provide a sound basis for assessing Putin’s objectives. The Russian President has called for a Russian sphere of influence in the former Soviet Union and Empire; new rules for the post-Cold War order “or there will be no rules”; and a right and duty to protect ethnic Russians and Russian-speakers wherever they happen to live.

Putin has shown no interest in annexing the Donbas, where Moscow has led, financed, armed and provided recruits for a hybrid war; he has also sent in regular Russian troops in September 2014 and again in January 2015 to lead offensives against Ukrainian forces. If he cannot engineer a compliant regime in Kyiv, Putin’s objective is to destabilize the current one.

Putin has demonstrated that his ambitions go beyond Ukraine. While his regular soldiers were fighting in Ukraine in August 2014, he sent a barbed message to Kazakhstan saying that it was an artificial country that under President Nursultan Nazarbayev treated its Russians well, but that good treatment may end when the 74-year old leader passes. In September 2014, the Russians kidnapped an Estonian counterintelligence officer from Tallinn and seized a Lithuanian ship in international waters of the Baltic Sea. We do not know what Putin will do next. We do know that he had surprised us with his audacity in seizing Crimea and then launching the war in Ukraine’s east.

One Cheer for the Authors
In spite of pushing hard for caution and taking at face value Kremlin-approved talking points, the authors note that the West must define and defend its interests with clear red lines. This is sensible advice, especially in the face of Putin’s revanchist aims and aggressive policies.

But before the West sets those red lines and enforces them, we need to understand likely Kremlin objectives, as well as its strengths and vulnerabilities. We must prepare for the likelihood that Putin’s revanchism does not end in Ukraine. Just as the West’s weak response to Kremlin aggression in Georgia and Crimea emboldened Putin in the Donbas, Western weakness in the current crisis could lead to further Kremlin provocations in the neighborhood, including the Baltic states.

This means that we need a resolute policy in Ukraine. Western sanctions must stay in place until all Russian forces and equipment return to Russia, and Ukraine controls the border in the east. Additional Kremlin aggression in Russia—to take Mariupol or more likely less fortified locations in the Donetsk or Luhansk regions—should prompt further sanctions.

The United States should provide substantial military aid, including defensive lethal equipment, to exact a higher cost on further Russian aggression. Such aid should have strict conditions about offensive use. The purpose is to help Ukraine stabilize the current ceasefire line. The Kremlin undoubtedly has the means to overwhelm the aid we provide, but they would still suffer more casualties, which is a political liability for Putin. The more casualties the Kremlin suffers, the more equipment it loses, and the more money it must spend for aggression in Ukraine, the less it will have for aggression elsewhere.

Finally, NATO should not just reiterate its Article 5 commitment to its members. It should deploy to the Baltic states a battalion of American soldiers. And they should be properly equipped with tanks, artillery, and missiles. NATO should also prepare a contingency plan for defeating a hybrid war in the Baltics, and the efforts should include military exercises. Now is the time to review and amend the NATO-Russia Founding Act, which was based on the idea that the Kremlin was a partner. But partners do not establish their bona fides by invading and provoking their neighbors. The US and NATO can take strong measures with Russia, announce their desire to reestablish a productive partnership with Russia, and spell out the changes in behavior that will make partnership possible.