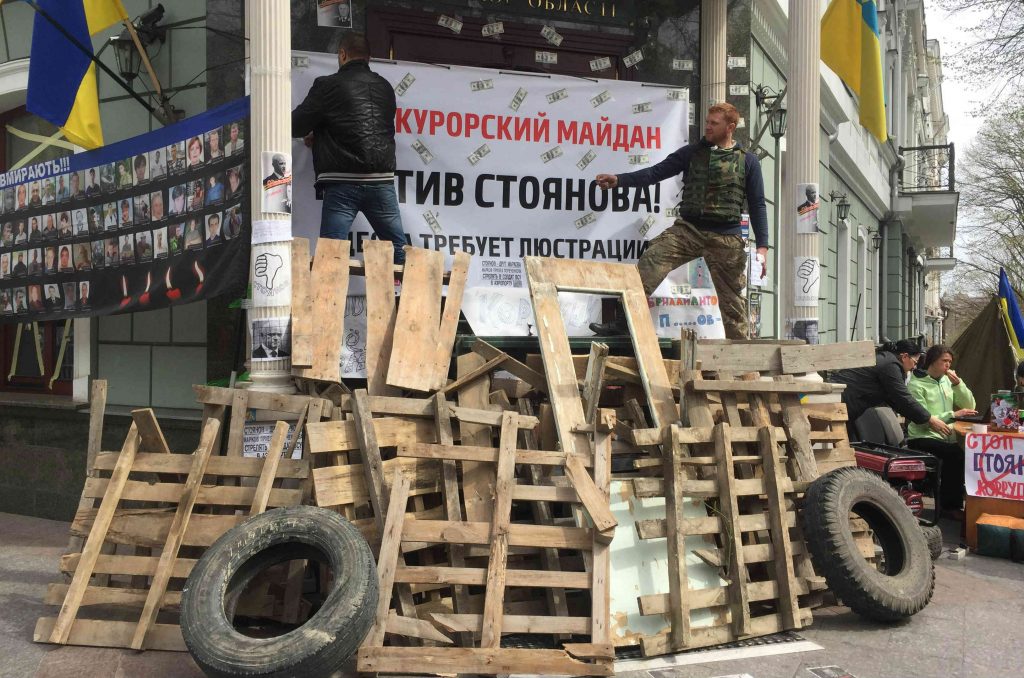 Several hundred protesters have camped out in front of the regional prosecutor’s office in Odesa for the past two weeks demanding that Ukrainian President Petro Poroshenko reinstate reformist Deputy Prosecutor General Davit Sakvarelidze, who also concurrently held the post of regional prosecutor of Odesa. Sakvarelidze’s replacement, Nikolai Stoyanov, has held the position twice before, including a stint from 2012 to 2014, at the height of the Yanukovych government’s alleged corrupt schemes here. Stoyanov is loathed by anticorruption activists.

Late in the day on April 11, “the Odesa Prosecutor’s Maidan” issued a statement saying that it would “completely blockade all entrances into the general prosecutor’s office as a reaction to the President’s lack of reaction to their demands, and that they would also face the legal responsibilities of their action.” The blockade is slated to begin on April 12 at 9 am.

After being hounded for almost a year by reformed-minded Ukrainians, Shokin offered to resign. Yet even after offering his resignation, Poroshenko’s loyal proxy hung on to his position for another month and a half, enough time to further stall and obfuscate key investigations. Poroshenko had reportedly been told by US Vice President Joe Biden not to show up for the Nuclear Security Summit in Washington without first putting a new prosecutor general into place. Parliament’s vote to sack Shokin came as Poroshenko flew to the summit.

Despite the tents, piles of tires, and dummy hung off a noose next to the entrance of the prosecutor’s office, it has functioned normally for the last two weeks. It has done so with the prosecutorial staff entering through the back door. The functioning of the prosecutor’s office has not been formally disturbed until now. Protesters have barricaded the front doors. Broad-shouldered men in fatigues guard the front doors. Tea is served and the mood is polite if also militant. Protesters grill shashlik and some have brought guitars to sing as they wait.

Thus far, Stoyanov hasn’t appeared in the office despite the fact that he is required to do so at least once a week. Protesters have been given the proverbial run around about his schedule. Earlier this week, Odesa oblast Governor Mikheil Saakashvili swooped in and delivered a short speech to the several hundred activists and journalists assembled in front of the building.

The appointment of Stoyanov is troubling. Stoyanov falls squarely under the mandate of the lustration law and theoretically should not be allowed to hold appointed office in Ukraine for ten years from the time of the Maidan. The acting prosecutor general does not seem keen on retracting his appointment. On April 9, the Ministry of Justice issued a ruling barring Stoyanov from serving as the regional prosecutor. A prolonged faceoff between the Prosecutor General’s Office and the Ministry of Justice seems assured, with the Ministry of Justice seeming to hold the superior, if not also the legally impregnable position. This has added to the sense among some observers that the Prosecutor General’s Office is an out-of-control government institution.

Over the weekend, rumors of an impending clearing of the protest outside the regional prosecutor’s office overnight by armed thugs led to a nighttime reinforcement of the encampment with miniature barricades. No such attempt to clear the protest ever materialized, though the possibility certainly still exists. Any such physical confrontations between supporters of the protest and the pro-Russian population could lead to further bloodshed reminiscent of the May 2, 2014, clashes that killed around fifty in street fighting.

On April 12, parliament is expected to vote on the nomination of Volodymyr Groisman (though he has since claimed a lack of interest) as the new prime minister, which is widely seen as a move by Poroshenko to consolidate power. The President will likely nominate a new prosecutor general by the month’s end, and his choice will showcase his true position on judicial reform. As more than one commentator noted, Poroshenko’s nomination for prosecutor general is more significant than the appointment of Groisman or the new cabinet of ministers.

Bankova’s preferred candidate seems to be Yuriy Lutsenko, the parliamentary faction leader of the Poroshenko Bloc. However, Lutsenko does not have any legal training and publicly acknowledges that the law would have to be changed in order to give him the position. That farcical suggestion prompted the reformist MP and former investigative journalist Sergii Leschenko (himself a member of the Poroshenko Bloc) to sardonically proffer himself as a worthy candidate for the nation’s top judicial post if a legal background was not a requirement.

If Poroshenko were serious about judicial reform, he might appoint Sakvarelidze to the top job, a move that would surely be seen as gesture of goodwill by reformists and international donors. Such an appointment remains a remote possibility, as the presidential administration is adamant in its desire to retain a forceful grip over the Prosecutor General’s Office.

Vladislav Davidzon is chief editor of The Odessa Review and Tablet Magazine’s European culture critic. He has reported widely from Eastern Europe, France, and Ukraine, and was previously Ukraine Today’s Paris correspondent.

Image: The “Odesa Prosecutor’s Maidan” barricaded the doors of the regional prosecutor’s office in Odesa on April 11, 2016. Credit: The Odessa Review