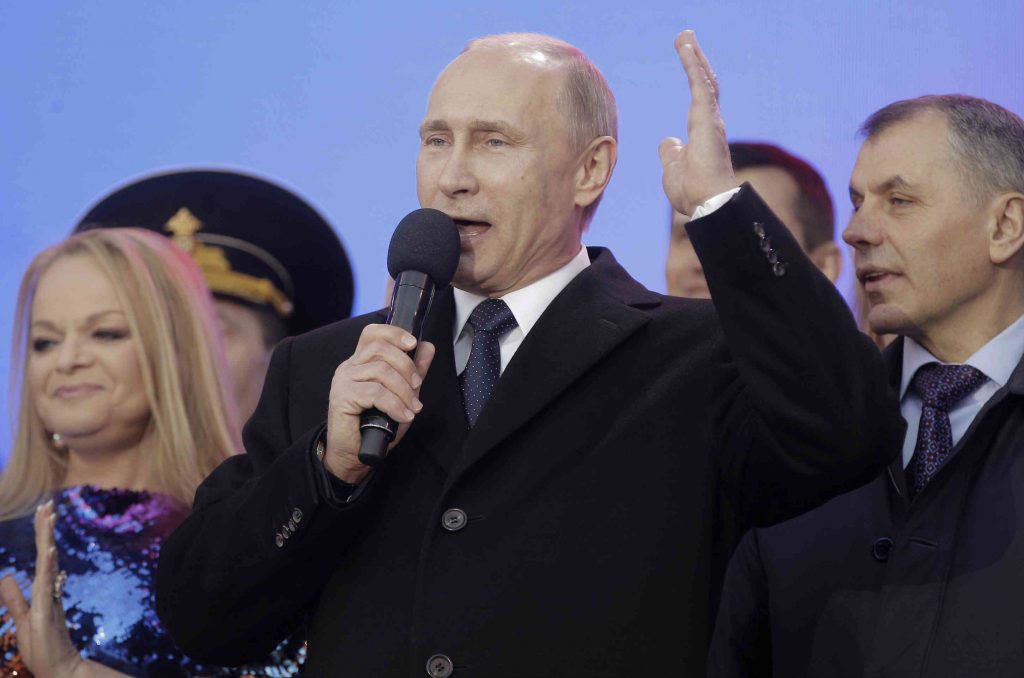 A growing number of Russian analysts, in Russia and abroad, have taken to calling Vladimir Putin’s regime “fascist.” And they don’t use the term casually or as a form of opprobrium. They mean that Putin’s Russia genuinely resembles Mussolini’s Italy or Hitler’s Germany.

One of the most recent examples was Mikhail Iampolski. According to the Russian-born NYU professor, “the appeal of quasi-fascist discourse was predictable” as the Russian economy tanked. Moscow rejects “[a]nything that could be seen as a sign of weakness or femininity,” including liberalism and homosexuality, and then projects these qualities onto the enemy. Consequently, “Ukrainians are systematically accused of fascism, while Russian fascism is displaced by a false idealization of one’s own image.”

In March, Moscow commentator Yevgeni Ikhlov charged Putin with introducing a “left fascism” that, while “anti-market and quasi-collectivist,” is “fascism because it is a form of a militant and most primitive philistinism.” In January 2015, Andrei Zubov, fired from the Moscow State Institute of International Relations for opposing Putin’s Ukraine policies, argued that Russia’s President was building “a corporate state of a fascist type packaged in Soviet ideology, the ideology of Stalinism,” resulting in a Russia that closely resembles Italian fascism with its “nationalism and union with the church.” Moscow-based analyst Aleksei Shiropaiev claimed that Russia was moving toward fascism “at a galloping pace.” Russian fascism “has become a FACT,” “mass Russian consciousness remains absolutely imperialist and chauvinist,” and most Russians have “ACCEPTED fascization and are ready to agree to even massive political repressions.”

But are the analysts right? The evidence is compelling. Fascist regimes have charismatic dictators with hyper-masculine personality cults. These regimes generally evince a hyper-nationalist ethos, a cult of violence, mass mobilization of youth, high levels of repression, powerful propaganda machines, and imperialist projects. Fascist regimes are hugely popular—usually because the charismatic leader appeals to broad sectors of the population. Putin and his Russia fit the bill perfectly.

In calling Putin’s Russia fascist, Russian critics have proven to be far bolder than their non-Russian counterparts in the West, who remain wary about the F-word. Some Westerners genuinely believe that Putin’s brand of dictatorship differs from past fascist regimes. They often locate the differences in the historical conditions that gave rise to Hitler, Mussolini, and Putin, and not in the actual characteristics of their regimes. But doing so confuses the origins of similar things with their essential features. No one would say that America is not democratic because the origins of American democracy lay in revolution and not, as with Britain, in historical evolution.

But many Westerners fear the implications of calling a spade a spade. If Putin’s Russia is fascist, then it is comparable to Hitler’s Germany and Mussolini’s Italy and, thus, certifiably evil. And that means that calls for understanding Putin amount to calls for understanding evil. So it’s better to pretend that Russia isn’t fascist. Hence the popularity of abstruse designations like managed democracy and sovereign democracy or terms—such as Putinism—that only state the obvious.

If the past is any guide to the future, Western skittishness about the F-word will evaporate. In the 1980s, Russian critics of the USSR described it as totalitarian, even as Western scholars shunned a term that had been vilified as anti-Communist. Western analysts feared its critical implications at a time of détente and preferred anodyne terms like authoritarian or non-democratic. Once Russians showed them that totalitarian was an accurate, and politically correct, designation for the Soviet regime, some Westerners got on the bandwagon. Those who did realized that the USSR’s transition from totalitarianism to democracy was going to be far more difficult than a transition from authoritarianism to democracy. Unfortunately, the epiphany came too late to affect policies formulated in the end of history euphoria of the early 1990s.

A similar conceptual change is likely to take place with fascism. As the chorus of Russian voices using the F-word grows, Western policymakers who insist that we should listen to Putin and understand his point of view will have no choice but to listen to and understand his critics.

Calling Putin’s system fascist will mark a conceptual breakthrough in Western attitudes—and perhaps policies—toward Russia. Viewing his state as evil does not necessitate rattling sabers. Soft power and diplomacy will remain no less important than hard power. But the conceptual shift would recognize that Putin and his regime are the problem, and that the problem will go away only when he and his regime go away. In a word, there are no quick fixes to the Putin problem. The West is in for a long, hard slog involving economic and military support for Ukraine and its neighbors, the containment of Russian imperialism, and support for anti-fascist elements within Russia. The good news is that, now as then, democracy will win.