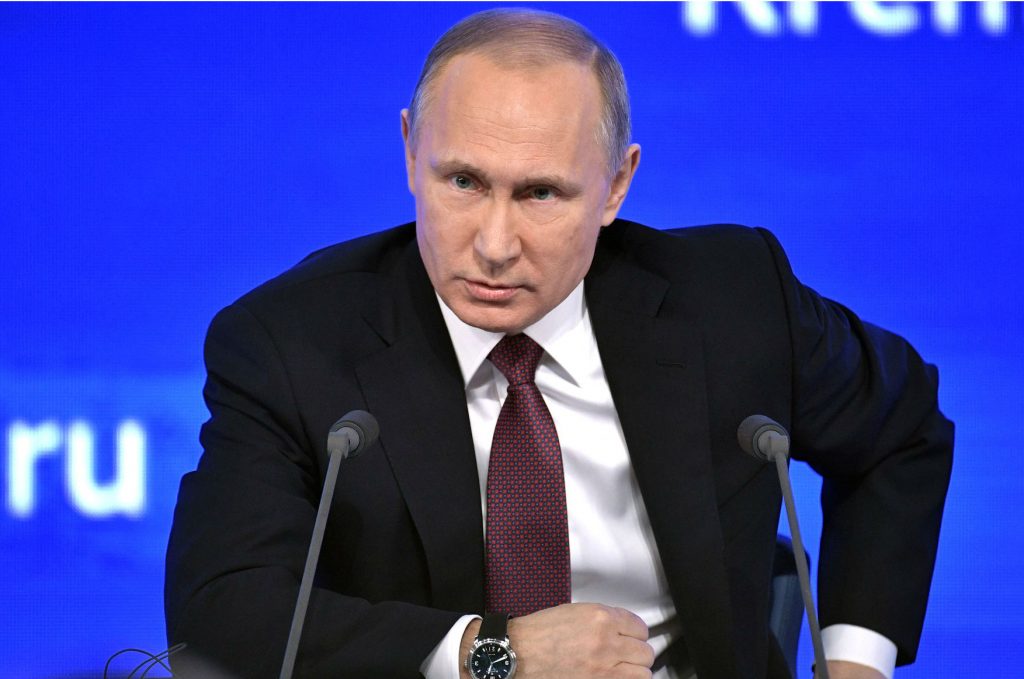 Are they speaking for themselves or are they acting on behalf of the regime, sending out trial balloons in order to test the popular, and overseas, response to the possibility of an all-out war? In democracies, private analysts generally speak for themselves. In authoritarian, totalitarian, and fascist regimes, highly placed analysts often speak on behalf of the leader—though unofficially, thereby providing him with plausible deniability.

On December 20, a senior expert of the Center for Military-Political Research at the prestigious Moscow State Institute of International Relations, Mikhail Aleksandrov, stated that if the Ukrainian military violates the ceasefire in the eastern Donbas in a massive way, Russia should respond with a “massive attack of the Donbas armies”—a reference to the 35,000 heavily armed Russians and Russian proxies in Donetsk and Luhansk provinces—“supported by our aviation and long-range systems: that is, by our rocket systems, cruise missiles, and Iskander rockets.”

On December 27, the popular TV program, “Evening with Vladimir Solovyov,” featured Aleksandr Kofman, the former “minister of foreign affairs” of the so-called Donetsk People’s Republic, and Rostislav Ishchenko, a former Ukrainian journalist who defected to Russia. The three debated how Russia and its proxies should seize Ukraine’s cities.

Ishchenko suggested that Russia should be wary of sending its ground forces into Ukraine’s large cities: “What if those idiots”—the Ukrainians—“hunker down in the big cities? Should we then send the infantry in to get slaughtered? Those would be huge losses for the Russian army.”

In response, Solovyov said: “We took Aleppo rather quickly. And it’s there that we learned to solve tasks in this manner. Moreover, the DNR army has learned to fight in cities. There’s no need to worry. The people of Ukraine will not fight for them”—meaning the democratic government in Kyiv.

Kofman is equally optimistic about the Russian army’s chances: “I know that as soon as our armies approach any city, the Ukrainian army always abandons it. That’s a fact.”

Finally, on December 29, Mikhail Khazin, a Russian economist, TV anchor, columnist, and ex-member of the presidential administration, suggested that Ukraine be divided between Poland and Russia. In the Russian part corresponding to Ukraine’s southeast, Moscow should effectively ban Ukrainian language and culture. The Russian-occupied north of Ukraine, corresponding to Kyiv, Sumy, and Chernihiv provinces, would be transformed into an agricultural hinterland stripped of industry and armed forces. The “excess population” would be deported to Russia’s Far East.

Unfortunately, says Khazin, there may be “several million people that cannot be reformed.” What should Russia do with them? His answer: “They need to be partly terminated, and partly expelled.”

Especially terrifying about these statements is the matter-of-fact manner in which they were made. Mass killings, aerial bombardments, ethnic cleansing, and genocide are, evidently, perfectly respectable options.

They are not alone. The Russian fascists, Vladimir Zhirinovsky and Aleksandr Dugin, have long since used equally extremist language.

Zhirinovsky has called for the “total annihilation” of the Baltic states and Poland. Dugin, a philosopher with a following in the West, routinely endorses imperialism and war. Putin himself has also engaged in his share of terrifying saber-rattling.

At the very least, the recent commentary in Moscow testifies to a brutalization of Russian political culture. As in other fascist states like Nazi Germany, violence, killing, and annihilation have become normalized and routinized, to the point that perfectly respectable gentlemen can now consider genocide as a perfectly respectable policy option for the Kremlin. It’s as if a democratic government were to appropriate and legitimize open hate speech—and not bat an eyelash while employing it.

The more worrisome possibility is that these talking heads aren’t just engaging in idle speculations and what-if scenarios, but that their focus on specifics—which Ukrainian cities and which Ukrainian provinces to target—suggests that, this time, they may mean it. This time, they really may be recommending that the Kremlin engage in an all-out war against Ukraine.

This wouldn’t be the first time that non-Kremlin spokesmen would have presaged Kremlin policy with their comments. The Soviets practiced this technique on a regular basis, with analysts affiliated with the state-supported policy institutes regularly dropping hints and testing the waters in both direct and indirect, Aesopian language requiring Kremlinological skills to be deciphered and correctly understood. Under former President Boris Yeltsin, when Russia was still a democracy, policymakers and analysts could express themselves openly. With the growing “fascisization” of the Putin regime, indirection and trial balloons have come back into fashion. And with good reason: Putin, the self-styled benevolent dictator, needs always and everywhere to appear to be a man of peace. He may threaten and he may growl, but talk of genocide, all-out war, and mass killing is reserved for his subordinates.

Strikingly, only Ishchenko, the Ukrainian traitor who knows Ukraine, truly understands that an invasion would not be a cakewalk and that Russian troops would suffer high casualties. In contrast, Solovyov and Kofman take it as a “fact” that Ukraine’s armed forces would not fight.

Their myopia is remarkable, if only because the Ukrainian army has fought Russia and its proxies to a standstill in the eastern Donbas. With only 6,000 battle-ready troops in early 2014, when Russia’s invasion of Crimea and the Donbas took place, Ukraine now has close to 100,000 experienced soldiers, a competent and experienced officer corps, and increasingly sophisticated hardware. Moreover, the population has become highly patriotic and anti-Russian and would fight. A Russian invasion would likely succeed, as Russia could deploy its air power to devastating effect, but the subsequent occupation would be exceedingly costly.

Based on the estimates of several American counter-insurgency experts, it is reasonable to conclude that Russia would need the following force levels to carry out an occupation. In order to occupy Donetsk and Luhansk provinces alone, Russian would have to deploy somewhere between 26,702 and 133,514 troops. A “land bridge” from Crimea to Transnistria would mean occupying Kherson, Mykolaiv, and Odesa provinces—which would entail somewhere between 46,497 and 92,994 soldiers. Occupying all seven southeastern provinces would require between 118,536 (26,702 for Donetsk and Luhansk and 91,834 for the others) and 317,182 (133,514 for Donetsk and Luhansk and 183,668 for the others). If Russia decides to conquer all of Ukraine, it would need an additional 548,587 troops—for a grand total of 667,123 to 865,769 troops. Kyiv city and Kyiv province alone would require 90,676 occupying soldiers.

Could Russia pull off such a war, even as it is embroiled in Syria?

The prospect of such high losses would deter rational leaders. Would they deter Putin, however, given his own contribution to the brutalization of Russian culture and Donald Trump’s possible acquiescence to Russia’s interventions in its near abroad? That the answer is not obviously no should be a cause of worry for the entire world.