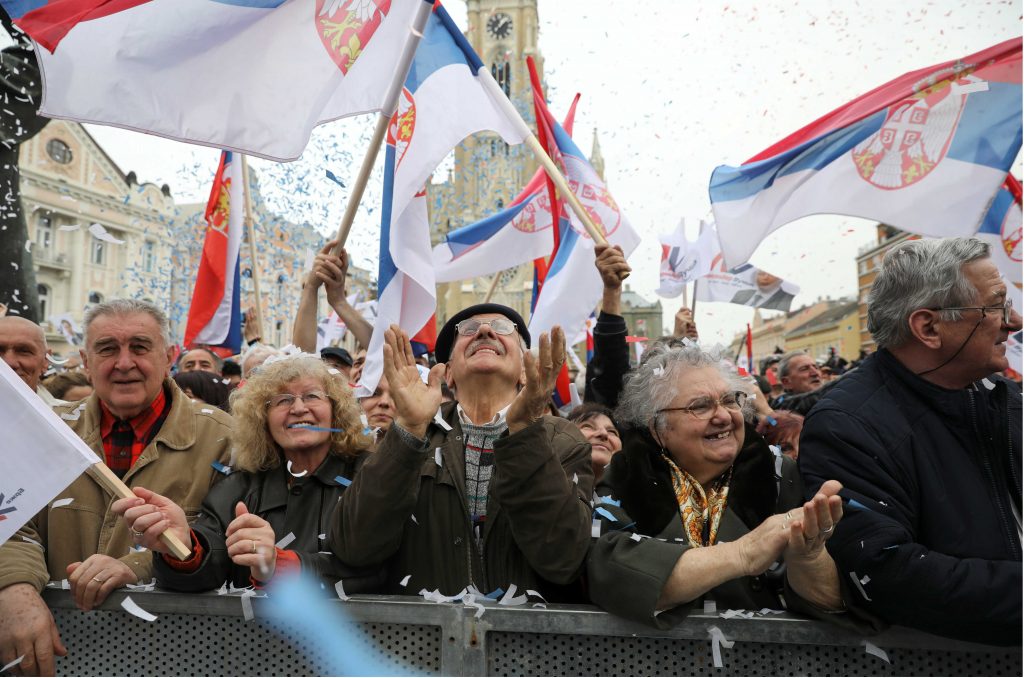 One year ago, in April 2016 when Serbia held snap polls, the BBC ran the headline “Pro-EU Prime Minister Vučić Claims Victory.” One year later, after Aleksandar Vučić’s resounding win in the presidential election on April 2, the international media has styled him “Putin’s Serb ally.” Who’s right and where is Serbian foreign policy heading?

It is not difficult to answer the first question; Vučić is neither pro-EU nor is he Putin’s associate. If being pro-EU is defined as a commitment to reform, the rule of law, and accountable government, Vučić fails the test by a mile. At the same time, Vučić won’t align with Moscow but will juggle ties with the East and West to get the best deal from both. Serbia will push forward with its EU membership negotiations and security cooperation with NATO (the Individual Partnership Action Plan signed in 2015 is being implemented), while refusing to join in on Western sanctions on Russia and courting Moscow for economic benefits and military hardware. Belgrade is doing what many EU nations—Austria, Bulgaria, Cyprus, Greece, Hungary, and Italy, to name a few—wish they were able to do.

Make no mistake about it—Serbia is not about to fall into Russia’s lap. After all, it was the “good guys” in the pro-Western camp, the former opposition to Slobodan Milošević’s regime, who rekindled political ties with Moscow in the mid-2000s and forged a diplomatic alliance against Kosovo’s independence. And it was former virulent nationalists like Vučić, Sloba’s youthful minister of information in the late 1990s, who began compromising with Pristina to move Serbia closer to EU membership. Putin, the Russian MFA, and political commentators in Moscow like to fume about the long-term consequences of Kosovo, but the fact is that Serbia decided to exclude Russia from the so-called normalization talks in 2011, transferring the issue from the UN to the EU. Serbia’s hard-core pro-Russian parties tried to challenge Vučić’s SNS, the ruling Progressive party, in the 2016 elections, launching a campaign for a referendum on NATO membership, but it did not get very far. Politicians such as Vojislav Koštunica and Vojislav Šešelj, the head of the Serbian Radical Party who once mentored Vučić, have retired. Their calls for a radical rift with the West and full reorientation to Moscow do not resonate with a majority of Serbians who are much happier with the incoming president’s message that having their cake and eating it too is perfectly achievable.

The real problem in Serbia has to do with its trajectory. The “Europeanization” of Serbia has more in common with Viktor Orbán’s Hungary than with consolidated Western democracies. With the 47-year-old Vučić firmly in charge of the media, police, security services, and public sector jobs, democracy is backsliding while the country is turning into a one-man show. The situation in Serbia is worse than in Hungary because Orbán tends to concentrate power by using formal legislative changes. For example, his government recently proposed a law that would close Central European University in Budapest. In Serbia, by contrast, it is done through informal influence. The incumbent president, Tomislav Nikolić, declined to seek reelection after a friendly chat with Vučić. Rumor has it that Nikolić was told that unless he changes his mind, his son Radomir, who is the mayor of Kragujevac, might face a criminal investigation.

Vučić’s move to the presidency might make matters worse. According to the constitution, the prime minister makes the decisions and is formally accountable, while the president gets the publicity but none of the blame if things go wrong. Both Milošević and then Boris Tadić (from 2004 to 2012) were able to pull the strings behind the scenes as president. Vučić will undoubtedly find a party loyalist to chair the cabinet and implement decisions but not challenge him directly.

After the news of Vučić’s victory broke, thousands of opposition-minded Serbs went to the streets of Belgrade, Novi Sad, Niš, and fifteen towns across the country to protest the “dictatorship” of Vučić. These protests continue unabated. The Serbian capital saw a wave of demonstrations in 2016 over a shady construction project, Belgrade On Water, which were driven by the same demographic of young, middle class, pro-EU people who are at the forefront of today’s rallies. However, sending a strong signal to Vučić that they are watching is the most they can hope to accomplish; there won’t be a recount or another election. Serbia is stuck with him for now.

Whatever happens next, the news from Serbia is not good for either the EU or the United States. Vučić can please his partners in the West and deliver on security and regional stability, but his whole career is a testament to the fact that the Western project of integrating the Balkans and Eastern Europe is fraught. Political elites know how to talk the talk but rarely walk the walk when it comes to democracy and good governance. Given the EU’s support for Vučić, whether tacit or open (Austrian Foreign Minister Sebastian Kurz was amongst the first to congratulate Serbia’s president-elect), it seems the periphery is changing the EU. European leaders have opted for an alliance of convenience with would-be autocrats rather than genuine reformers. European concerns about stability trumps any aspiration to transform countries and societies. This prospect will not make reformers in Kyiv or Tbilisi happy and certainly provides wind in the Kremlin’s sails.

Dimitar Bechev is a Nonresident Senior Fellow at the Atlantic Council’s Eurasia Center and a research fellow at the Center for Slavic, Eurasian, and East European Studies, University of North Carolina—Chapel Hill. He tweets @DimitarBechev.