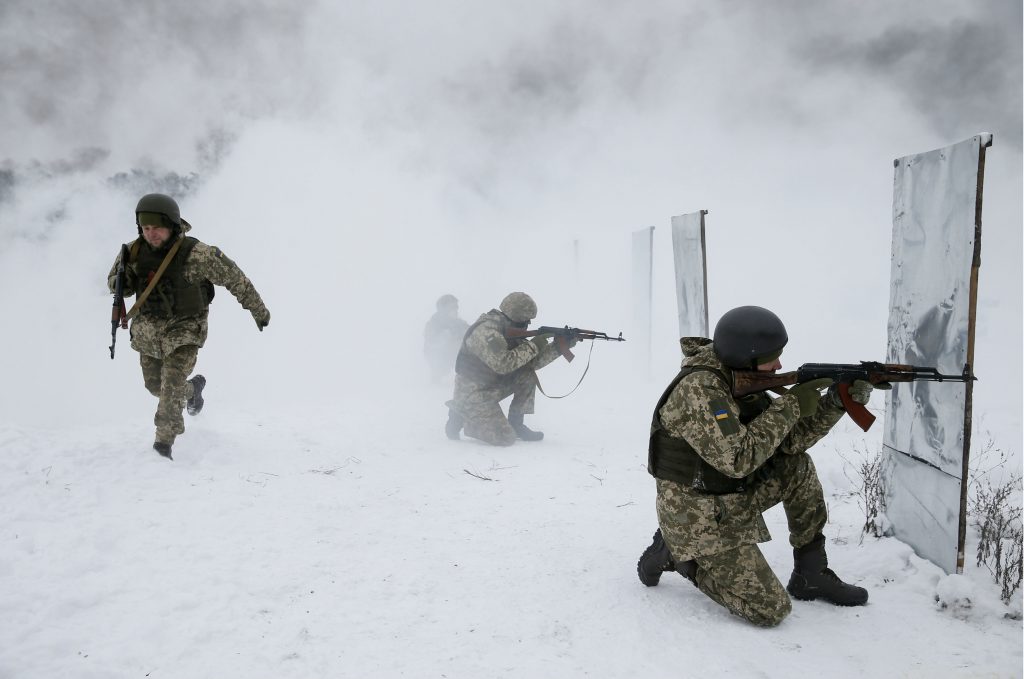 Last year Washington finally gave Kyiv the javelin missiles it had been begging for. But the javelins are mostly symbolic and won’t change much on the frontlines. For more than six months, Washington has been talking about giving Ukraine additional arms to improve its air and naval defenses. These arms are more likely after Russian ships attacked Ukrainian ones in November 2018. Some experts have put together lists of equipment that the United States could easily give or transfer.

In a word, yes. With a total of 250,000 personnel, Ukraine’s army is a strong fighting force, the third largest in Europe after the Russian and French militaries. Most military experts agree that the Ukrainian army could impose high costs on Russia in a defensive war. Simultaneously, however—and more important—Ukraine’s military is a “people’s army,” one that has the backing of civil society and is the most trusted institution. In many ways, it serves as a bridge between government and the public—and it is helping to keep the peace throughout Europe.

None of that was true when the Russian army backed separatists in the Donbas in 2014. Back then, the Ukrainian army consisted of poorly equipped conscripts who had been demoralized after years of neglect by governments in Kyiv. At the time, hastily formed volunteer battalions took on some of the earliest fighting, until the regular army could find its feet. Field units fought essentially uncoordinated local battles against the separatist-Russian forces directly in front of them; casualties were unnecessarily high. Nonetheless, while accounts vary, it appears that the Ukrainians inflicted significant losses on the attackers.

After the USSR imploded, Ukraine inherited some of the most modern segments of the Soviet military industrial complex, namely precision weapons, missile guidance systems, radars, and electronics. The ground forces are now at least adequately supplied with tanks and armored vehicles, and priority has shifted to air defense. Producing its own components, Ukraine has modernized or developed short and medium-range anti-aircraft systems, a tactical ballistic missile, and a multiple-use cruise missile. Serial production of these weapons is either just beginning or is one or two years away, but quantities will be constrained by lack of finances.

Perhaps worse than financial constraints is an outdated military bureaucracy and culture that emphasizes force concentration and subordination rather than a flexible type of warfare that is possible with motivated citizen-soldiers. Symptomatically, as many as 80 percent of contractees do not renew their contracts, mostly out of frustration with the poor command. The upper command’s ability to coordinate forces over a large theater within high-intensity warfare is questionable.

But Ukraine’s army is perhaps more interesting as a political institution than a combat one. It is composed mainly of ethnic Ukrainians, making the army more cohesive than the general population. Because the army is now largely a volunteer one, motivated recruits self-select into the ranks.

A test of the military’s values occurred during the 2014 Euromaidan, when the army refused to support the authoritarian regime led by President Victor Yanukovych and suppress social dissent. Another test occurred that year when volunteer battalions and the army dared to defy the intimidating Russian forces, whose Soviet ancestors once rolled over countries in Eastern Europe at will. The army survived the early rounds of the war partly because the civilian population rallied to repair vehicles, provide clothing, and buy personal equipment for the soldiers such as armored vests and night-vision goggles. Civilian volunteers braved danger to transport the equipment to the front and arrange its distribution.

To its credit, the Ministry of Defense was one of the first government ministries to participate in online procurement through ProZorro, which tracks the supply and feeding of the army. Of necessity, the largest proportion of NGOs and volunteer organizations in Ukraine are concerned in some way with defense issues. Most volunteer battalions have been integrated into the regular army, and relations between the army and civilian population in the liberated zones of the Donbas are good.

The result is a cohesive front. The army and nation have sacrificed too much to watch the government give to the Kremlin at the negotiating table what was paid for on the battlefield. Ukrainian defense officials have estimated that in a full-scale attack by Russia, the Ukrainian army could lose 15,000 soldiers in three weeks; but the population is psychologically prepared for such a scenario. For its part, the Kremlin must realize that if it were to cause more destruction in Ukraine, it would utterly lose the affection of the population; at the same time, the Ukrainian army would draw the teeth of the Russian army and economy even in retreat.

Nonetheless, there is no prospect of NATO membership in the near future. And given the West’s failure to enforce the Budapest Memorandum, whereby Ukraine forfeited its nuclear weapons for security “assurances,” NATO is not a credible ally in any case. NATO is useful, and essential, for joint weapons development and training, which are about as much as can be expected from it. Considering that the West declines to supply more than symbolic levels of lethal weapons, it is understandable that President Petro Poroshenko aspires to build his country’s military industry.

Meanwhile, Europe gets a free ride on the Ukrainian army’s defense effort. Ukrainians have shown that Russia can be resisted; this is heartening to the Baltic countries and reduces defeatism more broadly in Eastern Europe. Western Europeans can have both economic relations with Russia and military security, for their security risks have been externalized to the Ukrainian army. This perhaps explains Western Europeans’ complacency in the face of Russian threats.

In sum, the Ukrainian army enables a favorable situation in the region. Domestically, democracy continues its gradual development under this army’s protection. Internationally, Russia has been contained and would be weakened in a further war, and Western Europe may attend to its own affairs. The Ukrainian civilian population and under-equipped army conveniently guard Europe’s eastern wall. But such an effort cannot be sustained indefinitely by a poor country with a population less than one-third that of Russia’s. Thus Western military and economic aid is necessary.

In the meantime, there have been no serious crises in Europe recently because the Ukrainian army has matters in hand. Militarily, politically, and economically, this army is good for all of Europe.

Dennis Soltys is a professor in the Department of Public Administration and International Development at KIMEP University in Almaty, Kazakhstan.