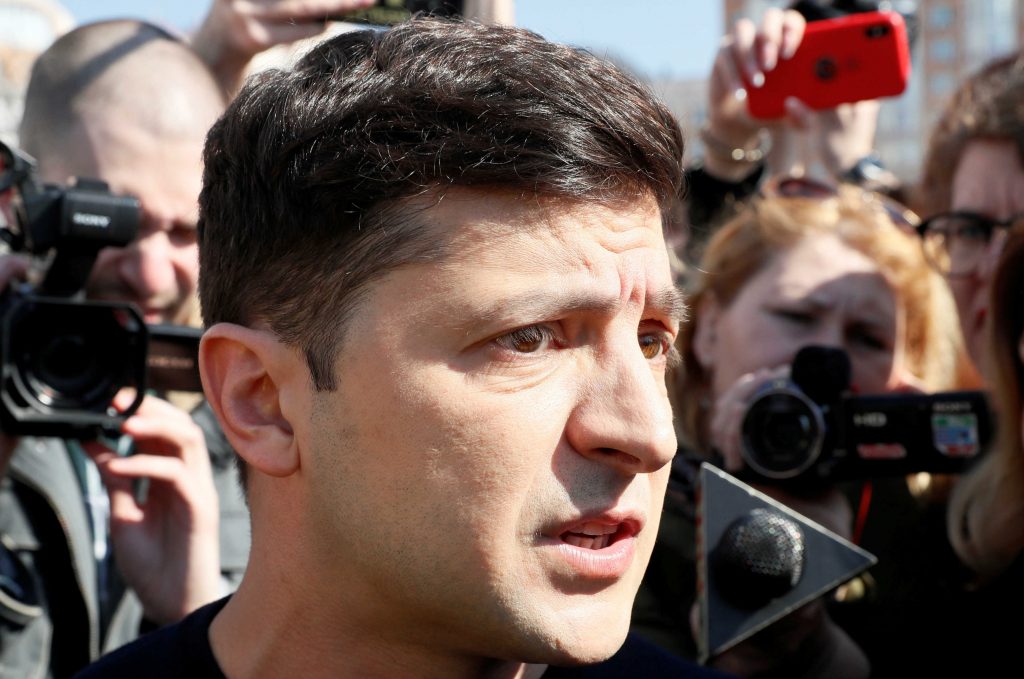 In the first round of Ukraine’s presidential election, the leading pro-Russian candidate secured 11 percent of the vote. Compare this to 2010 when pro-Kremlin candidate Viktor Yanukovych received 49 percent. This dramatic decline reflects the scale of the damage done to Russian interests in Ukraine by Vladimir Putin’s ongoing war. Russian aggression has alienated millions of Ukrainian voters while disenfranchising many more, leading to an unprecedented collapse of Kremlin influence in a country that has been at the heart of Russia’s imperial identity for centuries. Could the remarkable rise of comedian Volodymyr Zelenskiy help to reverse this Russian retreat?

Any talk of a Kremlin comeback seems fanciful in the current climate. The majority of Ukrainians hold Putin directly responsible for an ongoing conflict that has traumatized the nation, killing over 13,000, and shattering millions of lives. Unsurprisingly, this has driven Ukrainian public support for Euro-Atlantic integration to new heights, while at the same time leading to a precipitous drop in enthusiasm for the rival Russian trajectory. Moscow’s occupation of Crimea and the Donbas has undermined Russia’s ability to shape Ukraine’s democratic choices by removing large swathes of the Kremlin’s traditional support base from the Ukrainian electorate. Donetsk, Luhansk, and Crimea all voted overwhelmingly for Yanukovych in 2010. In 2019, they did not vote. Demographically, the odds are also stacked against Moscow. Most of the remaining Ukrainian support for pro-Russian candidates comes from pensioners, who are being slowly but surely replaced by a new generation whose attitudes toward Russia owe more to the current war than to rose-tinted nostalgia for the shared past.

With the Russian colossus no longer looming quite so large in the Ukrainian imagination, the country’s horizons have broadened significantly. Visa-free travel to the EU is having a major impact on how Ukrainians view their relationship with the rest of Europe. This newfound mobility is fueling an air travel boom that is bringing Ukrainians physically closer to their European neighbors than ever before. The large-scale labor migration of recent years also reflects the shift in Ukraine’s geopolitical center of gravity. Whereas previous generations would typically look north to Russia for employment, the outflow since 2014 has been predominantly to Poland and the Czech Republic. The estimated $14 billion in remittances this migrant workforce sent to Ukraine in 2018 represents a huge boost to the economy, but the experience of EU life they bring home will eventually have an greater impact on the nation’s future.

Meanwhile, the trade components of Russia’s hybrid war have obliged Ukrainian businesses to leave the post-Soviet comfort zone and expand internationally. Since 2014, Ukrainian exports to the EU have reached record highs and are poised to grow further. India has become Ukraine’s largest agricultural export market, with China and Egypt not far behind. Thanks to the loss of Russian markets, the Kremlin’s former breadbasket is now feeding the world. Similar processes are underway throughout the Ukrainian economy. In the energy sector, Ukraine has taken great strides toward energy independence in a bid to protect itself from what has traditionally been Russia’s most powerful non-military weapon. Institutional reforms have shaken up the Ukrainian gas industry, while government incentives have helped attract international investors and spark a renewable energy boom. Elsewhere, Ukraine has signed landmark cooperation deals with titans of Western industry such as General Electric, Boeing, and Airbus.

Nor can the Kremlin count on the kind of overwhelming soft power ascendancy it once took for granted in Ukraine. Russia’s war has forced Ukrainian society to demarcate the previously blurred boundaries between the two countries’ cultural universes, fracturing the formerly indivisible Russian and Ukrainian showbiz scenes and forcing celebrities on both sides to consider the political implications of collaborations that were previously second nature. The resulting combination of bans, language quotas, and hardening public opinion has reduced the Russian footprint in everyday Ukrainian life. Russian-made serials and movies no longer dominate Ukraine’s TV schedules, while Russian pop is not nearly so ubiquitous on Ukrainian radio playlists. Online, efforts to block Kremlin-controlled social media platforms have encouraged Ukrainians to use international alternatives.

Given all these negative trends, it is no wonder many now regard Russian influence in Ukraine as being at its lowest ebb since the Ukrainian statehood bid of the early twentieth century and the Cossack glory days of the 1600s. The elephant in the room, of course, is Volodymyr Zelenskiy. The TV comic is projected to win Ukraine’s presidential race and detractors claim this would represent a major victory for Putin. Indeed, President Poroshenko has sought to position the second-round vote as a direct choice between himself and the Russian strongman. The evidence cited in support of this argument is considerable but largely circumstantial. Zelenskiy has longstanding business ties to Russia and a campaign team featuring numerous personalities with pro-Russian pasts. He defends the Russian language while struggling to speak fluent Ukrainian. He is also undoubtedly popular among Ukraine’s pro-Russian electorate, and his candidacy has received approving coverage on Kremlin TV. Perhaps most damningly, Zelenskiy’s comedy career is replete with examples of him joking at the expense of Ukrainian national identity. Moderate critics see him as a threat to the processes of desovietization and Ukrainianization underway since 2014, while his staunchest opponents claim he is a Kremlin Trojan horse who would return the country to the Russian sphere if given the chance.

Zelenskiy’s own deliberately vague election platform has helped fuel these concerns, but what little he has said suggests that those hoping for a Russian reunion will be left disappointed. The comedian has spoken clearly and unambiguously about Russia’s responsibility for the ongoing war. He has backed Ukraine’s European choice and voiced his support for the country’s EU and NATO membership bids. Crucially, Zelenskiy has also committed himself to a reformist agenda that tallies with the ideals espoused on Maidan five years ago, while selecting well-respected and experienced reformers to serve as advisors. If this is the Kremlin’s best hope in Ukraine, it says much about how low Russia’s fortunes have fallen.

The even bigger elephant in the room is Zelenskiy’s backer Ihor Kolomoisky. Virtually all Ukrainian politicians have client relationships with one or more of the country’s oligarchs. Indeed, this is perhaps the defining characteristic of the country’s fledgling democracy. Nevertheless, the closeness of Zelenskiy’s relationship with Kolomoisky is exceptional. The two have been business partners for many years and Zelinskiy owes much of his superstar status to the blanket exposure he has enjoyed on the oligarch’s flagship TV channel. Inevitably, this has led many to assume Zelenskiy is little more than a cleverly curated virtual candidate fronting for his billionaire benefactor.

Kolomoisky’s fingerprints are all over the Zelenskiy campaign, and he would doubtless expect to benefit greatly should his protégé win. However, while Ukrainians have every reason to fear the prospect of Kolomoisky as the power behind the throne of a Zelenskiy presidency, this outcome would not necessarily offer Russia much comfort. After all, Kolomoisky has strong anti-Russian credentials, having been instrumental in stemming the tide of Putin’s spring 2014 invasion. As the emergency governor and de facto warlord of strategically vital Dnipropetrovsk Oblast, he did much to inspire the fight back that saved Ukraine from partition. At a time when other Ukrainian oligarchs hesitated, Kolomoisky bankrolled the military resistance, putting bounties on the heads of Russia’s “little green men,” and publicly ridiculing Putin as a “short schizophrenic.” If Zelenskiy’s campaign statements make him an unlikely Russian ally, Kolomoisky’s past actions position him as an outright adversary.

Ukrainian voters will be taking an enormous risk if they elect Zelenskiy on April 21. Huge question marks remain over his suitability for the role, ranging from his lack of knowledge and experience to his suspect temperament and acute sensitivity to criticism. As head of state, his stance on Ukraine’s nation-building process would come under scrutiny. There has been much talk over the past five years about the emergence of Ukraine as a political nation that has moved beyond the narrow linguistic and ethnic definitions of old. A Zelenskiy presidency would put these notions of a more inclusive Ukrainian national identity to the test.

Russia would welcome the potential chaos of a Zelenskiy presidency, much as they would cheer the political demise of Kremlin nemesis Poroshenko. However, Moscow would be wise to keep the champagne on ice. Zelenskiy may be culturally far closer to the Kremlin than Ukraine’s current leader, but his public positions on most key issues differ little in substance from those of his presidential rival. Unless we assume that his entire campaign is an elaborate façade, Zelenskiy would likely maintain Ukraine’s trajectory away from the Russian orbit.

Ultimately, it is hard to see how any presidential candidate could reverse the long-term decline of Russian influence in Ukraine. Putin’s war has succeeded in shattering the myth of Slavonic fraternity and compelled Ukrainians to distance themselves from their closest neighbor in ways that would have been unthinkable prior to 2014. Russia now finds itself branded as an aggressor state and deprived of the economic, social, and cultural levers necessary to recover its previously preeminent position. All wars eventually end, and it is reasonable to assume that Russian-Ukrainian relations will experience a thaw in the future. However, the days when pro-Kremlin politicians could hope to win national elections in Ukraine appear consigned to history. Russia will remain a disruptive factor in Ukraine for many years to come, but it is no longer in a position to dominate.