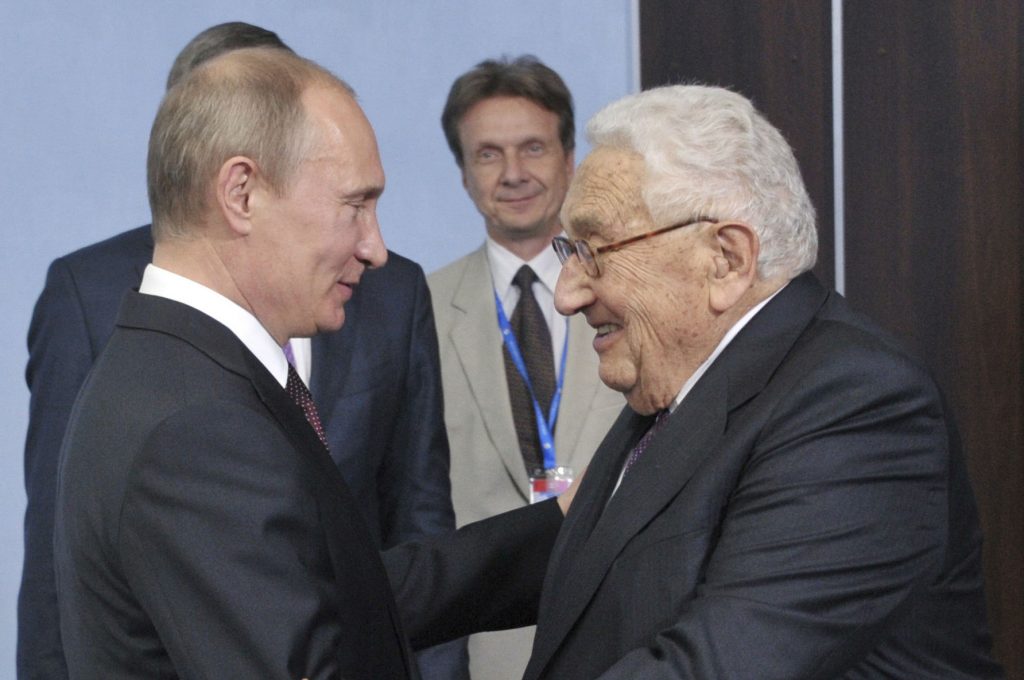 For more evidence of how badly Russian President Vladimir Putin has damaged the international order, take a look at former US Secretary of State Henry Kissinger’s recently articulated “vision for US-Russia relations.” It consists of large swaths of boilerplate language and several disingenuous arguments demonstrating that the architect of détente has no idea how to fix what Putin has broken.

Correctly, Kissinger says, “I do not need to tell you that our relations today are much worse than they were a decade ago. Indeed, they are probably the worst they have been since before the end of the Cold War. Mutual trust has been dissipated on both sides. Confrontation has replaced cooperation.”

Any effort to improve relations must include a dialogue about the emerging world order. What are the trends that are eroding the old order and shaping the new one? What challenges do the changes pose to both Russian and American national interests?… I am here to argue for the possibility of a dialogue that seeks to merge our futures rather than elaborate our conflicts. This requires respect by both sides of the vital values and interest of the other. These goals cannot be completed in what remains of the current administration. But neither should their pursuits be postponed for American domestic politics. It will only come with a willingness in both Washington and Moscow, in the White House and the Kremlin, to move beyond the grievances and sense of victimization to confront the larger challenges that face both of our countries in the years ahead.

These are the kind of content-less recommendations that foundations and Hollywood celebrities like, and that no one in the real world formerly inhabited by Kissinger has much use for.

Worse yet are Kissinger’s disingenuous arguments. For example, he says, “At the end of the Cold War… Russian pride in their role in modernizing their society was tempered by discomfort at the transformation of their borders and recognition of the monumental tasks ahead in reconstruction and redefinition.”

Just how the pathologies of central planning and communist dictatorship represent modernization is unclear. Worse, Kissinger has his history wrong: few Russians were proud of the USSR at the end of the Cold War. Nor did they experience discomfort at the transformation of their borders: the borders that transformed were Soviet. The borders that remained untransformed were Russian.

Kissinger also writes, “The prevailing narrative in each country places full blame on the other side, and in each country there is a tendency to demonize, if not the other country, then its leaders. As national security issues dominate the dialogue, some of the mistrust and suspicions from the bitter Cold War struggle have reemerged. These feelings have been exacerbated in Russia by the memory of the first post-Soviet decade when Russia suffered a staggering socio-economic and political crisis, while the United States enjoyed its longest period of uninterrupted economic expansion.”

Just how and why should memory of Russia’s travails in the 1990s—which were the product of Mikhail Gorbachev’s perestroika and the Soviet collapse it brought about—enhance mistrust and suspicion of the United States today? Kissinger’s claim makes sense only if Russian memories are rooted in paranoia: the view that Russia’s problems were brought about by the United States. Kissinger suggests that both sides’ narratives are equally to blame. That’s absurd: Americans may have misjudged Russia, but Russians fundamentally misunderstand the world.

Finally, he states that “Russia’s historical experience is more complicated. To a country across which foreign armies have marched for centuries from both East and West, security will always need to have a geopolitical, as well as a legal, foundation. When its security border moves from the Elbe 1,000 miles east towards Moscow, Russia’s perception of world order will contain an inevitable strategic component.”

This is just plain silly. The last time foreign armies marched across Russia from the East was, well, never. Back in the thirteenth century, the Mongols attacked Kyivan Rus. At that time, Moscow was a provincial town and Russia wasn’t even in existence. And just which foreign armies marched across Russia from the West? Hitler’s and Napoleon’s tried, but were smashed—by Russians, non-Russians, and the winter. Moreover, they did most of their marching and killing in Ukraine and Belarus. Sweden, Poland, and Lithuania fought Muscovy, but that was hundreds of years ago. Surely, Russian security fears don’t extend to modern-day Sweden, Poland, and Lithuania, and if they do, is that evidence of historical astuteness or paranoia? Besides, Moscow dealt with its putative fears quite efficiently, dismembering Poland in 1939 and annexing Lithuania in 1940.

But the most inauthentic part of the whole essay is its studious avoidance of any reference to Putin. Kissinger desperately wants to root the current imperialistic behavior of Putin’s Russia in Russian history. Fair enough, but to construct a “narrative” that ignores the man who has completely dominated Russian politics since 1999 is just too much. At the very minimum, it should be abundantly clear that, even if Russian behavior does have roots in history, it also has roots in Putin’s will to power.

Small wonder that Kissinger’s vision is so vapid. Having purposely elided one of the most important causes of the current troubles between Russia and the West, the best he can recommend is not a vision but, to quote President George W. Bush, a “vision thing.” The best one can say about Kissinger’s analysis is that it illustrates just how badly the man he refuses to mention has damaged the international security architecture.

Alexander Motyl is a professor of political science at Rutgers University-Newark, specializing on Ukraine, Russia, and the former USSR.