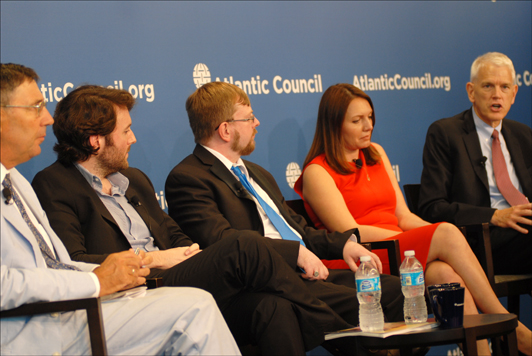 The Russian government under President Vladimir Putin is “directly coordinating and leading the fight to destabilize and disunite Ukraine”—despite Putin’s increasingly desperate efforts to hide the truth—concludes a damning report issued September 17.

“An Invasion by Any Other Name: The Kremlin’s Dirty War in Ukraine” is a joint production of the New York-based nonprofit Institute of Modern Russia and The Interpreter, a daily online journal that translates articles from Russian media while reporting on events in Russia and countries directly affected by Moscow’s foreign policy.

Its lead authors, Michael Weiss and James Miller, discussed their 84-page analysis at a September 17 conference hosted by the Atlantic Council in Washington. Miller is Managing Editor of The Interpreter, while Weiss is the website’s Editor-in-Chief as well as Senior Editor at The Daily Beast.

Following their presentations, the two journalists joined a panel with John Herbst, Director of the Dinu Patriciu Eurasia Center; Steven Pifer, Senior Fellow at the Brookings Institution, and Myroslava Gongadze, a TV anchor and reporter for the Voice of America’s Ukrainian-language service.

“It’s not easy reading,” said Herbst, a career diplomat who served as US Ambassador to Ukraine from 2003 to 2006. “This report is chock-full with data, but the data points you in a clear direction as to what’s happening and gives you a sense of the commitment the Kremlin has made to winning a war—albeit under the radar—in Ukraine’s east.”

The report itself is a painstakingly detailed, blow-by-blow chronology of Russia’s involvement in Ukraine, starting with Putin’s March 2014 annexation of Crimea, the May 25 election that brought President Petro Poroshenko to power, and an attack the very next day against Donetsk’s recently renovated international airport.

That May 26 battle killed at least 30 Russian-backed fighters as Ukraine counterattacked with paratroopers, Su-25 ground-attack aircraft, MiG-29 jets, and helicopter gunships. According to the report, evidence soon emerged that many of the dead soldiers were in fact Russian nationals; their bodies were among the first so-called “Cargo 200” shipments secretly sent back to Russia for burial.

“The evidence is so overwhelming, and there is so much of it,” said Miller. “Western journalists watched as Russian military hardware poured over the border. That should have showed us a window into how the Kremlin was attempting to influence Ukraine—at first with a hands-off approach through the now-infamous ‘little green men,’ then ultimately through armored divisions, paratroopers, and Russian combat soldiers operating and building bases in Ukraine and across the border.”

By mid-June, amid escalating fighting, reporters learned that three T-72 main battle tanks had crossed the Russian border into Ukraine. According to the report, the camouflage with which the tanks were painted was not consistent with that used by the Ukrainian military, and the vehicles had been stripped of all identifiable symbols and numbers—a tactic used in Crimea by the Russian military.

“In the midst of this escalation, a civilian airliner is shot down,” said Miller, referring to the downing of Malaysia Airlines Flight 17 over eastern Ukraine. “This was a casualty of this constant ramping up of direct, very reckless military intervention on Russia’s part.”

The July 17 tragedy killed 298 passengers and crew, with evidence strongly suggesting that a Buk anti-aircraft missile in the hands of Russian-backed fighters destroyed the jumbo jet after these soldiers mistook it for a Ukrainian military transport plane.

“The day before MH17, we saw the first direct evidence—filmed by Russian citizens—of Grad rocket launchers firing rockets into Ukraine from Russian territory,” said Miller. “How can anybody explain this in a way other than this being a direct Russian military intervention?”

A lesser-known aspect of the Ukraine conflict is the degree to which Moscow is apparently covering up the deaths of Russian soldiers—even to the point of harassing journalists who attempt to film military funerals or interview widows about their loved ones.

“A lot of the evidence we have derives from social media such as Facebook, Twitter and Instagram. These things can be faked and geolocated. We simply cannot rely on this kind of data without some corroboration,” said Weiss, adding that every single journalist, blogger, activist or politician who tries to investigate the issue of the Donbas war dead has suffered reprisals from intimidation to prison to physical attacks.

One of them is Lev Shlosberg, a deputy in the Pskov regional legislature who was severely beaten by unknown assailants because he wouldn’t stop asking questions about why some of the paratroopers of Russia’s 76th Guards Air Assault Division were missing and later turning up dead.

“The bulk of the evidence to suggest a Russian invasion has come from Russian journalists and Russian civil society,” explained Weiss, who has also written extensively on media coverage of the Arab-Israeli conflict and Russia’s involvement in the Syrian civil war. “The [Putin] government has made every attempt to castigate these groups, accusing them of being foreign agents or hirelings of the State Department.”

But he added that “Putin simply can’t keep this wrapped up anymore” as the truth continues to leak out, one way or another.

Indeed, observed VOA’s Gongadze, “this report is clear evidence of the West’s unwillingness to call what’s happening in Ukraine an invasion. European governments, NATO and the United States don’t want to see the reality on the ground. So thank you, guys, for doing this and helping the Ukrainian government prove what they’ve been saying for so long.”

Gongadze said neither the Minsk I nor the Minsk II ceasefire agreements will stop the fighting—nor is this a “frozen conflict” as some in the US media have been labeling the war.

“This will always be a burning conflict, because there are no clear barriers in eastern Ukraine as we see in Georgia with Abkhazia, or in Transnistria,” she said. “Fighting will escalate again. The only way to solve this is to strengthen reform and support the Ukrainian military. Unfortunately, NATO doesn’t have a clear strategic policy toward Russia. We have to stop seeing Putin as just a badly behaved boy. He is a criminal.”

Larry Luxner is a Washington-based freelance writer and photographer.

Image: From left, John Herbst, Director of the Atlantic Council’s Dinu Patriciu Eurasia Center; Michael Weiss, Editor-in-Chief of The Interpreter and Senior Editor of The Daily Beast; James Miller, Managing Editor of The Interpreter; Myroslava Gongadze, TV anchor and reporter for the Voice of America’s Ukrainian Service, and Steven Pifer, Senior Fellow at the Brookings Institution, discuss Russia’s “dirty war” in Ukraine on September 17, 2015, at the Atlantic Council in Washington. Photo: Larry Luxner