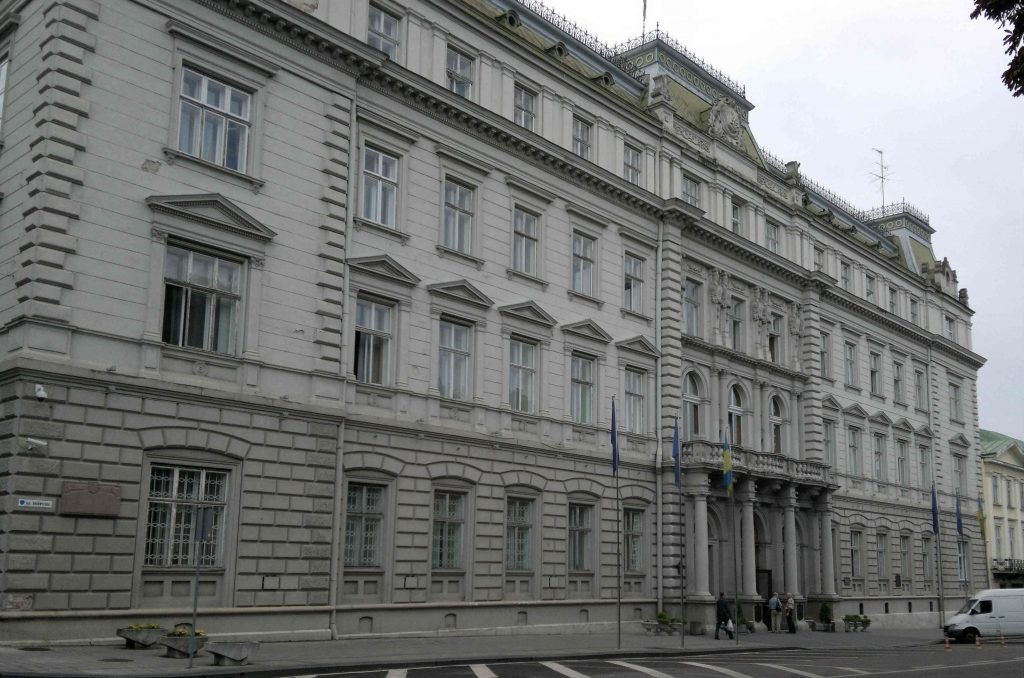 Western leaders pressing Ukraine to give into Russian demands and offer the so-called Donetsk and Luhansk People’s Republics autonomy would be well-advised to take note of the other parts of Ukraine which, according to Russian media, are also demanding self-rule.

On July 17, approximately twenty people in Lviv staged a blitzkrieg demonstration with banners demanding greater autonomy for Halychyna in western Ukraine. The action lasted no more than five minutes, but was presented on Russian pro-Kremlin channels as a 300-strong demonstration blocking one of the city’s central streets. Rossiya 24’s report deemed it “Kyiv’s new problem.”

The event bears a strong similarity to a similar stunt in Odesa on March 19, most chillingly because the fake demonstrations supposedly reflect an increase in separatist sentiments that were preceded by bomb blasts. In Odesa, the first acts of terrorism date back to April 2014, while there have been three attacks in Lviv in the past three weeks. Most recently, two police officers were injured in two explosions outside police stations on July 14. Russian TV has presented the bombings as linked to the conflict between the Right Sector and police in Mukacheve. Commentators suggest that if they are linked, the Lviv bombings are more likely to have been orchestrated by the Russian FSB than Right Sector. It is not clear that they were a direct result of the Mukacheve events, however, since the first explosion on June 25 preceded the fighting in Mukacheve.

In Lviv, a group appeared at 5:30 PM on July 17 with banners, “dashed out onto Horodotska St. near the Circus, ran along the road, took several photos, and like rats, dispersed in different directions so that they wouldn’t be caught,” Ihor Zinkevych from the civic initiative Varta 1 (Civic Watch) wrote. Varta 1 was alerted by residents and arrived within five minutes, but by that time, the participants had already fled.

The demonstration was apparently organized by two local left-wing organizations, the communist publication Halytsky Yastrub (Halychan Hawk), and Zakhyst Suspilstva (Public Defense). Little is known about Zakhyst Suspilstva, but Zaxid.net had written about previous attempts by Halytsky Yastrub and the husband and wife team—Dmytro Lyashchenko and Olena Boiko—associated with it, to “organize provocation with communist symbols in the city.” On the day after Victory Day, Lyashchenko walked around Lviv with a communist flag and the St. George ribbon. The ribbon was used during the 70th anniversary events marking the Soviet Union’s victory over Nazi Germany, but for most Ukrainians it is widely associated with Russian aggression in Crimea and the Donbas. Lyashchenko was assaulted, which was clearly the aim, so that the Russian media could draw attention to an attack on a Lviv journalist for supporting war veterans.

Russia’s attempts to present Lviv as a hotbed of nationalism are nothing new, but the July 17 stunt was worryingly different.

The Russian media reports mixed up a couple of details, which suggests that the information was prepared in advance of the event, and the event was merely staged for a photo-op.

Halytsky Yastrub and Zakhyst Suspilstva notified the authorities of their plan to hold a picket outside the Lviv Regional Administration on July 17 at 11 AM. Right Sector said that it would try to stop the picket, and it was present, together with journalists and the police. However, the picket did not take place because the authorities prohibited it.

It is, of course, possible that the original source was unaware or decided to ignore the fact that the scheduled picket did not materialize, and that the Russian media simply repeated its information, inaccuracies and all. Possible, but unlikely. Bagnet.org has a spotted reputation and is anything but a mainstream source, yet Russian channels like Rossiya 24 and Life News reported the same story within an hour or two.

The picket as planned never took place, but a five-minute sprint for the cameras was held much later, and not outside the Lviv Regional Administration. The banners read: “Special status of Halychyna – real autonomy for the Lviv oblast”; “Enough of feeding the thieves in Kyiv!”, “More self-government for Halychyna.” The participants carried Ukrainian flags and blue and yellow banners. This was highly unusual for Halytsky Yastrub, but perfect for Russian propaganda.

The flash-mob demonstration produced three photos intended to suggest a large-scale event. Rossiya 24 showed all three, asserting that Right Sector tried to stop the protest which ended outside the Lviv Regional Administration. From there, the channel moved to Mukacheve, with the key theme much the same: conflict, lack of unity, and demands for greater self-determination.

Russian media did not show the widely posted photos, allegedly from the same event, where participants were being paid for their separatist zeal.

Even if there had been a 300-strong demonstration in support of autonomy in western Ukraine, it would not necessarily have been a problem. This is something that Moscow does not understand. Modest attempts to call for greater autonomy in Russia last year resulted in criminal prosecutions, activists being placed on Russia’s terrorist and extremist list, and widespread media bans.

But another fake protest against a background of real explosions is disturbing. In addition to Lviv, there is clear evidence of Russian encouragement, if not creation, of separatist movements in Odesa and Transcarpathia. In this light, western illusions regarding an end to Moscow’s demands following Ukraine’s acquiescence over greater autonomy for the Donbas seem dangerously misguided.

Halya Coynash is a member of the Kharkiv Human Rights Protection Group. This article was originally published by khpg.org and has been abridged.

Image: Two local left-wing organizations planned to hold a picket demanding greater autonomy for Halychyna in western Ukraine outside the Lviv Regional Administration (pictured) on July 17 at 11 AM. However, the picket as planned never took place, but a five-minute sprint for the cameras was held much later, and not outside the Lviv Regional Administration. The banners read: “Special status of Halychyna – real autonomy for the Lviv oblast”; “Enough of feeding the thieves in Kyiv!”, “More self-government for Halychyna.” The participants carried Ukrainian flags and blue and yellow banners. It was perfect for Russian propaganda. Credit: Creative Commons/Warrior of Light