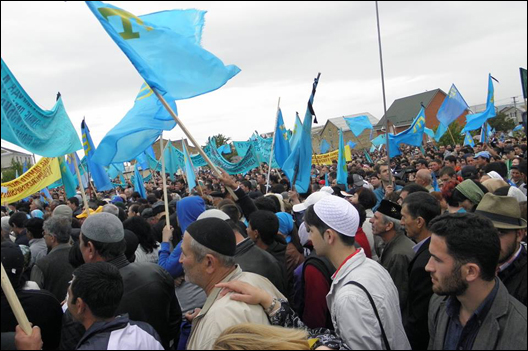 The Russian annexation of Crimea in March 2014 is widely regarded as a tragedy for Crimean Tatars. But for Adile Namazova, it was also a professional catastrophe.

A recent university graduate with near flawless English, Namazova, 22, had been working as a language tutor before annexation. But once Crimea changed hands, travelers stopped coming, food prices shot up, and banks closed. The peninsula’s tourism-dependent economy went into a tailspin. Soon Namazova’s clients could no longer afford their English lessons, and she found herself out of a job.

“I wanted to be a tour guide for visitors, but after annexation there was no one,” she said. “I even went to [the historic city of] Bakhchysarai, but they told me, ‘Sorry, we don’t have any foreigners, so we don’t need interpreters.'”

After months of searching for employment, Namazova left her native Simferopol for the western Ukrainian city of Lviv. She had no job, few contacts, and no place to live.

Namazova’s decision is far from unique. Since March 2014, more than 20,000 Tatars have left the Crimean Peninsula, with Kyiv, Kherson (a city right across the border from Crimea), and Lviv being popular destinations to relocate. For ambitious Tatar young people just starting their adult lives, emigration to mainland Ukraine holds a particular pull: more than an escape from the occupation, it is also a shot at professional opportunities and self-realization unavailable in a disputed territory.

“Because of the occupation, Crimean diplomas won’t be recognized anywhere else in the world besides Russia,” said Alim Aliev, 26, the Lviv head and co-founder of Crimea SOS, a Tatar non-governmental organization that helps displaced persons and advocates for Crimea.

For this reason, he said, it is paramount that Crimea’s best and brightest leave. But that is often easier said than done. Namazova struggled to find work in Lviv when she first arrived in 2015. There were periods when she stayed in a hostel and slept at her workplace, and she missed her family in Simferopol.

To Serdar Seytapiev, 21, a newly minted dentist who finished his studies in Lviv after annexation, the problems are bigger than money and loneliness. Young Tatars who leave Crimea feel the burden of their people’s history: born to parents who returned to their native land from Soviet-imposed deportation in Central Asia, most Crimean Tatar youth have seldom traveled and are often ill-prepared to leave, he said.

“Traveling is very hard for us because of our feelings of responsibility to Crimea,” Seytapiev said. “[We feel] that we have only one place where we should build our homes and raise our families.”

For that reason, Crimea SOS provides support to young Tatars displaced by occupation. Every Sunday, Crimean Tatars in Lviv gather in the organization’s office, prepare food, and socialize. Crimea SOS also organizes cultural projects that expose the wider population of Ukraine to Crimean Tatar culture, and the organization sends young Tatars to youth conferences and festivals in Europe. The broader aim, Aliev says, is to support the preservation of Crimean Tatar culture and identity both inside and outside Crimea while helping young Tatars prosper in Ukraine and Europe.

“Our goal now is not to allow a rupture between the people who left Crimea and those who remain,” Aliev said.

But to Bekir Suleimanov, 23, chairman of the Kyiv branch of the Crimean Tatar Youth Center, that goal is about more than simply ensuring that Crimean culture and identity do not disappear; it is also about preparing for the end of the occupation. Founded in April, the Kyiv branch wants to build the next generation of Tatar leaders.

“Today our biggest request is that Ukraine put our young people to work in different branches of the government and prepare personnel,” he said. “That way when Crimea returns to Ukraine, they can relocate there to continue their work and help the region flourish.”

His organization is also trying to lobby Kyiv to ensure that Crimean Tatar youth get the best education possible, which has grown more challenging since annexation. Not only are other countries loath to recognize Crimean diplomas, the Ukrainian Ministry of Education refuses to recognize grades given to students in the new Crimea. Suleimanov’s organization wants Tatar families remaining in Crimea to know that their children can register in Ukrainian schools, study through distance learning, and eventually receive Ukrainian high school diplomas.

Aliev is working on the same issue. Together with the Ministry of Education, he has formulated a proposal to allow Crimean students to enter Ukrainian universities on preferential terms after passing an exam covering the subjects they studied after annexation. The Ministry of Education is refining the proposal, and Aliev hopes it will soon come into effect.

Despite these problems, many young Crimean Tatars feel guardedly optimistic about their future in mainland Ukraine. Namazova is working again as an English tutor in Lviv. Living in one of Ukraine’s most popular tourist destinations, she feels her work is important, and she has been touched by the kindness of the local people.

“When they found out I was from Crimea, they were always helpful,” she said. “I didn’t expect it to be that way.”

Seytapiev, the dentist, had similar experiences in Lviv. He is particularly grateful to the local medical university for helping transfer students from Crimea enroll and adapt to their new environment. He has found opportunities to integrate into the city. In February, he organized the first ever Crimean Tatar language classes in Lviv and was astounded to find that half of those who enrolled were ethnic Ukrainians. Seytapiev even sees a silver lining to the Russian occupation.

“Now, Crimean Tatar youth can fully participate in the political life of the entire country,” he said.

Matthew Kupfer is a graduate student at Harvard University. He previously worked for the Washington-based Carnegie Endowment for International Peace.

Image: Crimean Tatars protest May 18, 2014, in Simferopol to mark the 70th anniversary of their community's deportation by Stalin in 1944. Photo via Crimea SOS Facebook page