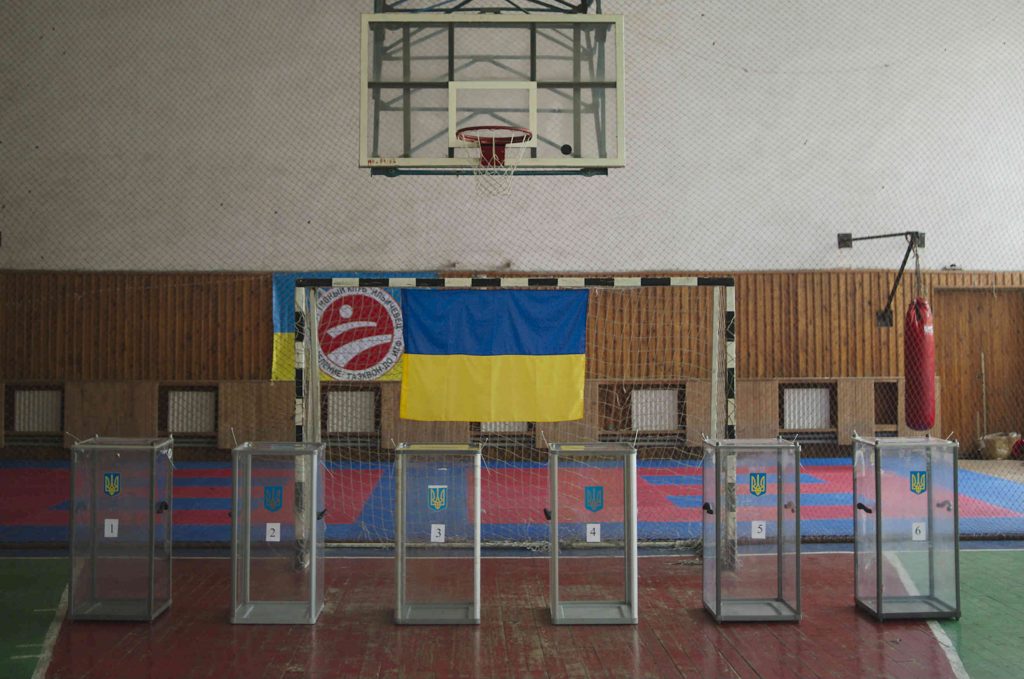 As cities finished counting the votes from Ukraine’s second round of mayoral elections, Mariupol and Krasnoarmiisk in the Donetsk region still haven’t held elections. Mariupol, which over the last nineteen months has been a strategic target of pro-Russian separatists, has become a political battleground. Local elections that were supposed to take place on October 25 were canceled, officially because of “the improper preparation of election ballots, the absence of control over their printing and number, and lack of reliable storage.” However, the events that led to their cancellation appear to be more political than procedural. Mariupol volunteers and activists blocked possible election fraud by the Opposition Bloc—a party born from the ashes of former President Viktor Yanukovych’s Party of Regions. Continuing manipulation and the recent escalation in violence threaten to again disrupt the elections scheduled for November 29.

Little has changed in Mariupol since the Euromaidan Revolution. The steel company Metinvest—owned by Ukrainian oligarch Rinat Akhmetov—runs the city and is determined to maintain its monopoly by backing the Opposition Bloc and advancing its mayoral candidate. Pro-Euromaidan parties stand almost no chance in a race that activists called “elections without a choice.”

Amid this power struggle and the central government’s apathy, a small group of volunteers and political activists achieved an unprecedented result by blocking what would have been an unfair and nontransparent race.

The October 25 pre-electoral process in Mariupol was nothing new; activists observed the Opposition Bloc bribing voters and abusing administrative resources. But the biggest controversy was over the printing of ballots. Volunteer Anzhela Timchenko discovered that 250,000 ballots had already been printed before the Territorial Election Commission (TEC) had rendered a final decision on where to print the ballots. The controversy worsened when the Central Election Commission (CEC) removed seven representatives of pro-Euromaidan parties from the TEC, leaving representatives from the Opposition Bloc more voting power. Then the TEC ordered the ballots to be printed at Akhmetov’s newspaper in Mariupol instead of a state printing house in Kyiv. Activists appealed, but the Donetsk district court said the move was legal.

Having lost in court, candidates and activists wanted to supervise the ballot printing at the least. But they were blocked by the police for hours before they could discover several legal violations in the printing process: packed ballots were left unguarded and others had mistakes. But most importantly, activists noticed discrepancies in the count. For example, one pack was marked as having both 1,800 and 800 ballots, while another pack was marked as “two packs.” Ensuring an accurate count was impossible, and there was a real risk of ballot stuffing. As a result, activists questioned the transparency and integrity of the entire process.

When the President and law enforcement failed to respond to the protests to prevent ballot manipulation, activists feared that Kyiv was working with Akhmetov to predetermine the elections’ outcome. They blocked the printing house from distributing ballots despite orders from the CEC to proceed with the elections.

Activists also feared that previous support of the separatist referendum in May 2014 by some members of the Opposition Bloc coupled with the hopes of some residents for the return of the Donetsk People’s Republic might reactivate the separatist movement and eventually pave the way for a Russian land corridor to Crimea.

As the November 29 elections approach, activists are still fighting political dirty tricks. Although the CEC agreed to print and supervise ballots in a government office, a new problem arose when the CEC forbade advertising and solicitation for a week before the elections. It claimed that the solicitation process was complete before the cancelled October 25 elections. Activists from the People’s Force party appealed and protested, stating that the ban violates the law; the law bans solicitation only one day before elections. This ruling put pro-Euromaidan parties at a greater disadvantage. On November 23, the Kyiv Appeals Court struck down the CEC’s anti-advertising decision. This small legal victory demonstrates that the democratic process in today’s Ukraine is possible when civil society stands up.

Meanwhile, the Opposition Bloc switched from grechka tactics—bribing voters with food and promises—to blackmailing local residents. Metinvest steelworkers report that rumors are circulating that if they do not vote for the “right” candidate, the plants may be shut down.

The West hopes that the elections will set a precedent for the future of democracy in the occupied territories, but the increase in ceasefire violations has foiled these expectations. Ukraine’s Anti-Terrorist Operation headquarters is reporting armed provocations near Mariupol and indications of an offensive to possibly disrupt the elections.

As the elections near, activists will once again have to stand up to the old guard. And Kyiv, in addition to assuring security and fighting corruption, needs to be more outspoken in its support of the Mariupol activists if it is serious about preserving its image as a democratic state.

Vera Zimmerman, a native of Mariupol, Ukraine, is an intern at the Atlantic Council’s Dinu Patriciu Eurasia Center.

Image: Empty ballot boxes are seen at a polling station on the day of regional elections in Mariupol, Donetsk region, Ukraine, October 25, 2015. Ukrainians went to the polls to appoint mayors and council heads to regional seats. The local election in Mariupol was cancelled due to the absence of official ballots, according to local media. Credit: REUTERS/Maksim Levin