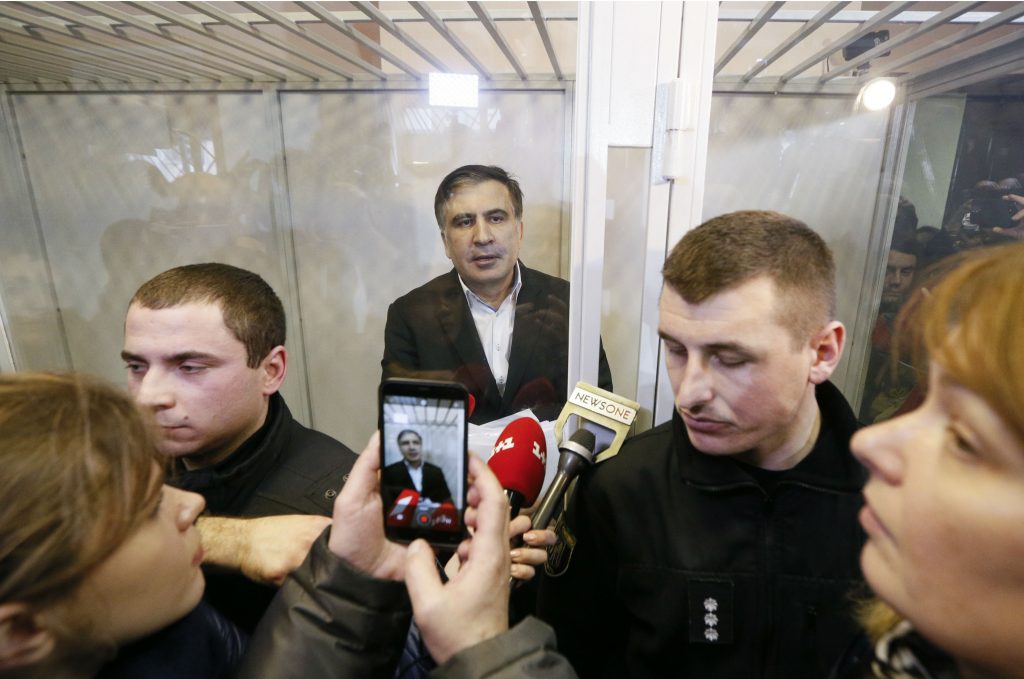 This fall has been an ugly one for Ukraine. Throughout September, October, November, and December, Ukrainian authorities have illegally detained, persecuted, and expelled several foreign journalists and other foreign residents, causing observers to question whether Ukrainian leaders are actively violating human rights and willfully persecuting their political opponents in an effort to maintain their grip on power.

In fact, the Ukrainian authorities seem to be pursuing a policy of double standards, demanding that Russia liberate Ukrainian political hostages and journalists while simultaneously arresting dissenting activists, journalists, and political opponents.

The case of former Georgian President and opposition leader Mikheil Saakashvili captured the world’s attention on December 5, as special forces attempted to detain him. The law requires a court order for such an arrest to take place, which law enforcement bodies did not have. His supporters eventually freed him, but Saakashvili was later arrested on December 8 for allegedly “aiding and abetting a criminal organization.” On December 11, a judge released him. Numerous observers and rights organizations view the ordeal as politically motivated.

Saakashvili soaks up international attention, but there are numerous other cases that have escaped notice and are also worrisome.

Most notable, perhaps, was the detention of three foreign journalists who were fleeing persecution from post-Soviet authoritarian regimes. The three opposition journalists were ostensibly detained due to Interpol red notices, which were published because of politically motivated requests from the journalists’ home countries.

Uzbek journalist Narzullo Okhunzhonov asked for asylum in Ukraine. But as a result, according to the court’s decision of September 25, he found himself in a remand prison, where his health deteriorated. Azerbaijani journalist Fikrat Huseynov received refugee status and citizenship in the Netherlands, which protects him from extradition to Azerbaijan. But he was arrested in Ukraine during a private visit on October 14. Human rights defenders sounded the alarm; thanks to them, Okhunzhonov and Huseynov were released.

Kazakhstani journalist Zhanara Akhmetova hoped that she and her young son would not be in danger once they were in Ukraine. But Ukraine’s migration service denied her shelter without informing her, and then arrested her on October 24. On November 22, the Kyiv Court of Appeals dismissed her case after Ukrainian MP Svitlana Zalishchuk paid her bail.

Another journalist was arrested the next month. On November 17, Georgian reporter Tamaz Shashvishvili, who works for Rustavi-2, a popular TV channel in Georgia, was kidnapped in Kyiv together with his friends Zurab Tsyntsadze, Vano Nadiradze, and Mamuk Abashidze. Shashvishvili, who for the last three years has been working in Ukraine with official accreditation from the Ministry of Information, was arrested by the Security Service of Ukraine (SBU) in his own apartment. He says that Ukrainian authorities violently beat him, put a bag on his head, placed him in handcuffs, and deported him to Georgia.

The SBU rejected the journalist’s claims of violence, stating that it had not beaten him, nor subjected him to inhumane treatment during his deportation. “The SBU decided to deport these foreigners on the basis of evidence presented by the State Migration Service and the National Police of Ukraine, which showed that these foreigners acted against the interests of the national security of Ukraine,” SBU spokesperson Olena Hitlianska said.

The Council of Europe wasn’t convinced by this explanation. It published an alert mentioning “attacks on the physical safety and integrity” of Shashvishvili.

On October 21, a month before Shashvishvili was arrested, three other Georgians—Georgi Rubashvili, Mikheil Abzianidze, and David Makishvili—were also illegally and violently arrested without grounds. They were put on the ground face down with machine guns pointed at their heads; then bags were put on their heads and they were taken to Kyiv-Zhulyany airport, where they were interrogated—also in violation of the law.

The arrest, imprisonment, and illegal expulsions of these seven Georgians obviously violates the Ukrainian constitution. In particular, it breaches those articles stating that “Foreign nationals…staying in Ukraine on legal grounds shall enjoy the same rights and liberties and have the same obligations as Ukrainian nationals,” and “Every human has a right to freedom and personal immunity.”

Valery Lutkovskaya, the Commissioner for Human Rights of Ukraine’s Verkhovna Rada, confirmed that according to the documents she received from the State Migration Service, the national police illegally expelled Makishvili, Abzianidze, and Rubashvili on October 21 without a court decision, something that is prohibited by law in Ukraine. Lutkovskaya also said that the state bodies did not provide her with any documents stating the grounds on which the three Georgians’ residence permits were allegedly revoked.

A number of other alarming events recently took place. In late November, Anatoliy Vynohorodskiy, Oleksandr Novikov, and Leonid Lytvynenko were sentenced to sixty days of pre-trial detention; Vynohrodsky and Lytvynenko are accused of attacking a guard at a private enterprise in July and Novikov has been charged with kidnapping; all three deny the accusations and say that the charges are politically motivated. All are members of the NGO Rukh Vyzvolennya (Movement to Liberate Ukraine from Oligarchs and Traitors), which is part of the coalition that supports the ongoing demonstrations in front of the Verkhovna Rada. The Movement of New Forces, Saakashvili’s party, is a prominent member of the coalition.

Another dangerous precedent in post-Maidan Ukraine is the Ukrainian authorities’ flippant attitude toward citizenship. In March, President Petro Poroshenko submitted a bill to the Verkhovna Rada that provided for the automatic withdrawal of Ukrainian citizenship for those who have other citizenships. That covers more than 10 percent of Ukrainians, and led to great public outcry and a wave of indignation. The law was not adopted, but Poroshenko then began to deprive political opposition members (Andrey Artemenko, Sasha Borovyk, and Saakashvili) of citizenship by decree.

Freedom of speech and assembly, the protection of human rights, and the right to peacefully protest are the founding principles of a democratic country. The Ukrainian authorities must stop harassing journalists and political opponents. It’s time for the international community to put more pressure on the Ukrainian government in order to avoid a return to the repression of the Yanukovych era. We’ve come too far for history to repeat itself.

Violeta Moskalu is the founder of the Global Ukraine Foundation.