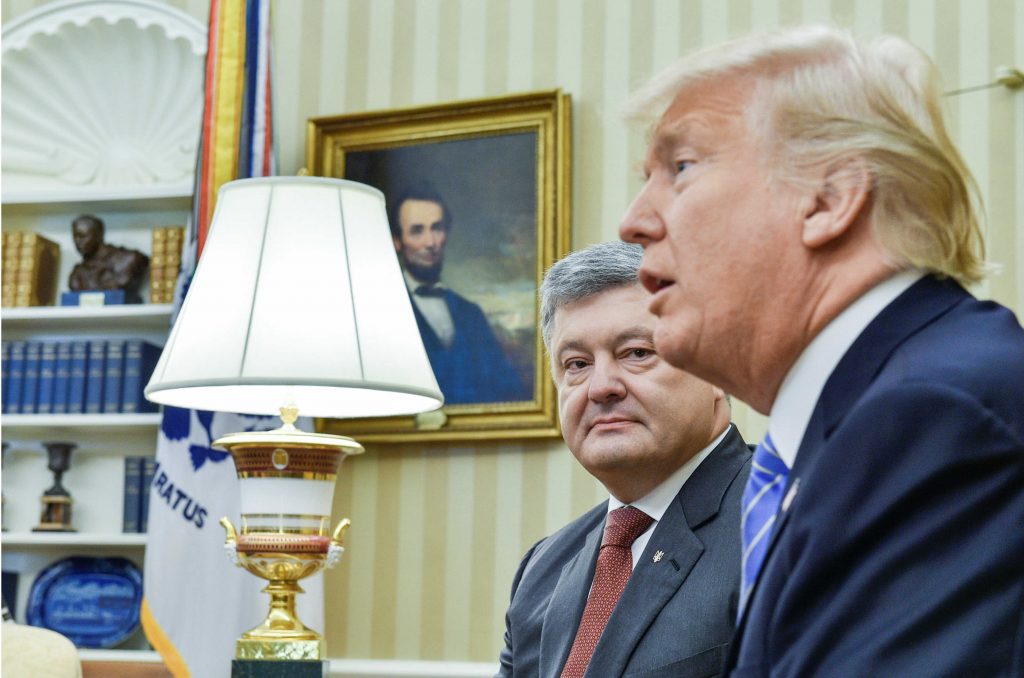 The first meeting between Ukrainian President Petro Poroshenko and US President Donald Trump on June 20 was widely hailed as a small but significant victory for Ukraine, signaling continued American support at a time when many fear Ukraine’s struggle with Russia is in danger of becoming a forgotten war. The only fly in the ointment was Trump’s reference to “The Ukraine,” which elicited a predictable chorus of moans.

Numerous commentators chose to see this gaffe as yet another example of Trump’s allegedly amateurish and uninformed approach to foreign affairs. However, in fairness to the current resident of the White House, he is far from alone in failing to name Ukraine correctly. His predecessor Barack Obama repeatedly referred to “The Ukraine,” while numerous other international leaders have also been guilty of the same offense in recent years.

Many struggle to see why the use of the definite article is such a big deal for Ukrainians. There is a tendency to group it together with that other great English-language pet peeve of the Ukrainian community, the debate over the rival “Kiev” and “Kyiv” spellings of the country’s capital. This comparison is unfair. While there is a good argument for stating that English-language city names often differ from their rendering in the native tongue (Moscow, Florence, and Munich being obvious examples), continued references to “The Ukraine” cut to the very heart of the nation’s centuries-long struggle to establish itself as an independent state.

Admittedly, numerous other countries include “The” in their names. However, this is generally in reference to a collective or grouping of some sort, such as The United States of America, The Netherlands, or The Philippines. Such logic does not apply in Ukraine’s case. Instead, the seemingly innocuous use of this three-letter word instantly relegates the country to the status of geographical region in the manner of the Midwest, the Ardennes, or the Algarve. Ukrainian objections to this are not mere pedantry. They are a matter of national honor and historical justice.

There is reason to believe that the origins of this subtle linguistic attack on Ukrainian sovereignty are anything but accidental. The term “The Ukraine” first entered popular usage during the Soviet era at a time when the Kremlin was particularly eager to counter perceptions of Ukraine as a separate and distinct nation. This was the least of the Soviet crimes committed against Ukraine’s national aspirations. The genocidal engineered famine of the early 1930s was a direct attack on the agrarian heart of the Ukrainian nation, while the destruction of the Ukrainian intelligentsia during the Stalinist terror was a deliberate attempt to decapitate the nation. Right up until the end of Soviet rule, the suppression of Ukraine’s independence movement was one of the key internal battles waged by the Kremlin. Even at the dawn of perestroika in the mid-1980s, Ukrainians made up around half of the political prisoners languishing in the gulag. Many reported that it was easier to speak Ukrainian in the camps than it had been back home in Soviet Ukraine.

Sadly, little has changed in the twenty-six years since the collapse of the USSR. Russia may have grudgingly acquiesced to the idea of Ukrainian independence amid the chaos of 1991, but there is little to suggest that either the Kremlin itself or the wider Russian population ever accepted the reality of a genuinely sovereign and separate Ukrainian state. In this context, the shock and horror expressed throughout Russia during Ukraine’s 2004 Orange Revolution seems to have been entirely authentic. To ordinary Russians used to regarding Ukraine as an unofficial extension of their own state, this pro-European uprising was a mystifying act of betrayal.

The current hybrid war in eastern Ukraine has exposed the full extent of the Kremlin’s post-Soviet imperial pretentions, revealing a modern Russian state that is openly contemptuous of Ukraine’s claims to statehood. Kremlin TV regularly provides platforms for those who believe Ukraine is a manufactured and artificial nation, while Russian President Vladimir Putin referred witheringly to “the territories now called Ukraine” during his annual call-in show. Putin is in many ways the champion of Ukraine denial. In 2008, he told US President George W. Bush that Ukraine was “not even a country.” He is also fond of publicly stating his belief that Russians and Ukrainians are “one people,” a claim that explicitly denies Ukraine an independent identity while implying Ukrainian membership of a wider Russian world. This conviction is particularly revealing of Putin’s mindset. He sees Ukraine as a domestic affair and not a foreign policy issue, hence his readiness to adopt extreme measures that he would hesitate to use in the international arena. This is a perception he shares with millions of Russians. In their eyes, the real separatists are the Ukrainians themselves.

When world leaders refer to the country as “The Ukraine,” it is reasonable to assume they are not lending their tacit support to Russia’s ongoing campaign against Ukrainian statehood. They are simply unaware of the baggage that accompanies the phrase. This makes them no different from the vast majority of the international community, who have no idea that Ukraine’s independence struggle has been one of the longest and deadliest in history. Nevertheless, the time has come to draw a line under awkward references to “The Ukraine” and to start giving the country the respect it deserves. Ukraine stands on the frontlines of a hybrid war against a resurgent Russia that seeks to dismantle the security apparatus of the post-WWII world and reverse the verdict of the Cold War. While politicians in the US and EU fret over election hacks and fake news, Ukrainians are paying with their lives. The very least the rest of us can do is get the country’s name right.