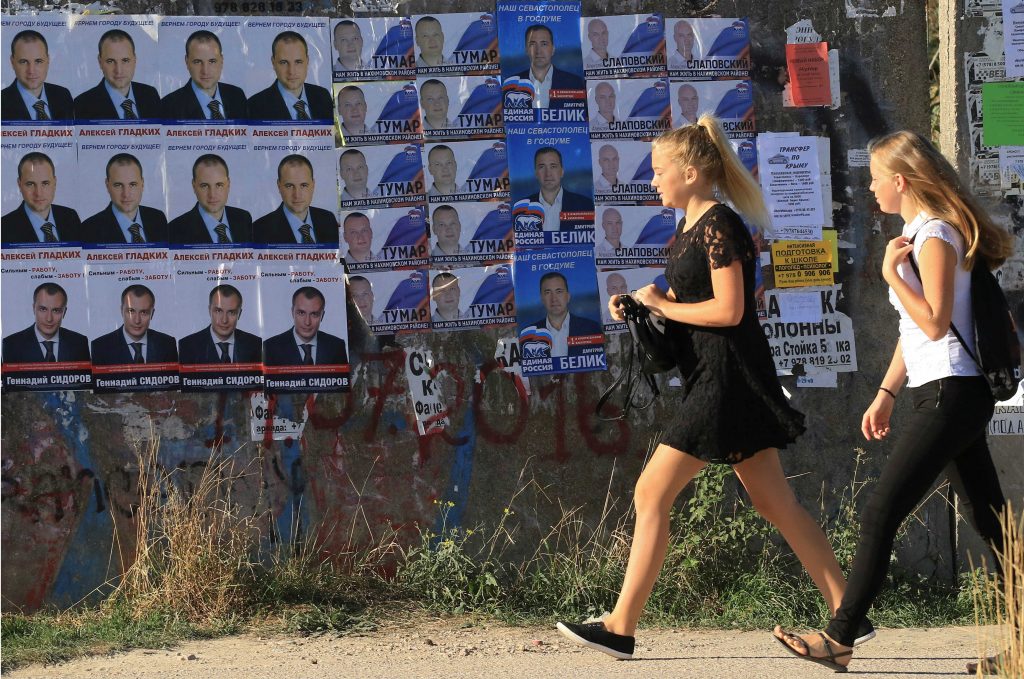 On September 18, Russians went to the polls to elect 450 members of parliament. The big news is that Vladimir Putin’s United Russia performed surprisingly well, taking approximately 54 percent of the vote. But the underreported news is this: Russians elected four MPs from occupied Ukrainian Crimea, which is illegal and grossly violates international law. The Ukrainian parliament does not recognize the Duma elections as legitimate and urges the international community to reject the results altogether; recognizing them will legalize the ongoing occupation of Crimea and their acquiescence undermines the rule of law. Officials in Denmark, Estonia, Germany, Lithuania, Romania, Sweden, and the United States have already announced that they won’t recognize the results of the illegal polls in Crimea, and we thank them for their unwavering support and expect others to join them.

Some international observers monitored the parliamentary elections, but all European countries, as well as the United States and Canada, and European international organizations, refused to send observers to Crimea.

The Ukrainian parliament has asked foreign parliaments, parliamentary assemblies, and international organizations to refuse to recognize the legitimacy of the election results; Russia held elections on the occupied territory of the Autonomous Republic of Crimea, a peninsula which legally belongs to Ukraine. On March 16, 2014, Crimeans voted for Russia to annex Crimea in a sham referendum that was condemned across the board. We call on international organizations to exert every effort to prevent the inclusion of those members of parliament who were elected in occupied Crimea into Russian parliamentary delegations to the Parliamentary Assemblies of the Council of Europe, the Organization for Security and Cooperation in Europe, and the Organization of the Black Sea Economic Cooperation.

Lest we forget what’s at stake: Russia’s war against Ukraine is real, with daily attacks and causalities. More than 10,000 have died already and nearly two million have been displaced. Russia continues to transfer arms and military forces to Ukraine through the portion of the border which is out of Kyiv’s control and where Moscow denies OSCE observers access to monitor. Russian President Vladimir Putin continues to deny Russian involvement in the conflict.

German Foreign Minister Frank-Walter Steinmeier and French Foreign Minister Jean-Marc Ayrault visited Ukraine last week and made claims about common responsibility for the war. Steinmeier declared that there was progress in meeting some of the conditions of the Minsk ceasefire agreement. Meanwhile, Russian Presidential Administration spokesman Dmitri Peskov said that Russia “didn’t promise anything like that.”

Here in Ukraine we no longer ask “When will Russia stop lying?” Now we ask, “When will Steinmeier and Ayrault get fed up with the Kremlin playing them for a fool?”

I asked the foreign ministers a simple question: How can we get Russian forces out of Ukraine and make Putin keep his promises? It is difficult to get an answer from our partners. It is easier for them to press us, asking which demands of the aggressor we have satisfied. Today we hear voices calling for dialogue with Russia again. What were the results of such dialogue before?

The results of the German OSCE chairmanship in pressuring Putin to keep his main promises in the context of a peaceful settlement have been underwhelming. A year ago, when the Ukrainian parliament voted for the constitutional amendment concerning decentralization, we counted on the help of our foreign partners in peacekeeping, withdrawing military forces, and exchanging prisoners. Now I realize that we have been too naive waiting for a peaceful process with strong international control and security. We continue to lose our friends, husbands, and neighbors; recently my best friend lost her 33-year-old husband who was killed by a Russian sniper in the Donbas.

This war is not just our war. Putin is not about to fulfill the Minsk agreement; he continues to destabilize Ukraine and Europe. We sincerely hope that German and French foreign policy will stay the same as it is after the 2017 elections there, and, together with the United States, they will demonstrate strong solidarity confronting the aggressor that attacks our common values.

Before Europeans try to persuade Ukrainians to agree to political dialogue with the aggressor and vote on an election law in the occupied territories, western leaders should first go to Luhansk and Donetsk and evaluate the conditions for themselves. It is necessary to see the reality, not the picture of Russian propaganda shared throughout Europe for Gazprom’s money. Our position is clear—no elections until a real ceasefire, deoccupation, and Ukrainian control over its border.

What does Ukraine need to win the war in the Donbas? Western solidarity and firmness. Ukrainian cities and soldiers are being shelled by Russian artillery and military forces without any epaulettes on their uniform. These attacks are being ignored in Europe, and it’s time to change that.

Hanna Hopko is a member of Ukraine’s parliament and chair of its foreign affairs committee.