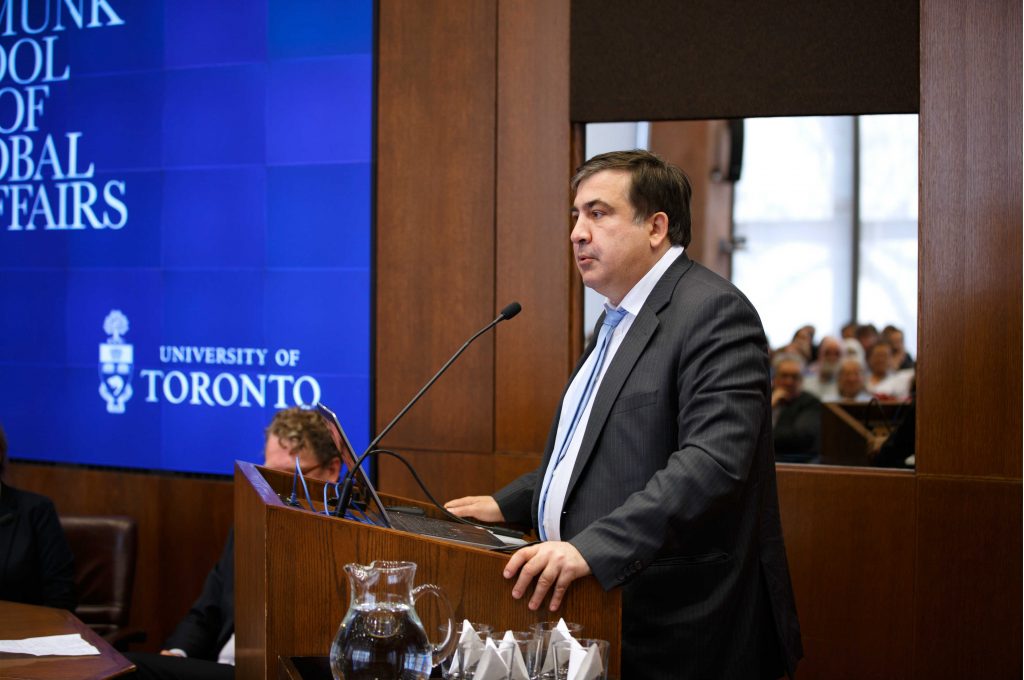 Mikheil Saakashvili strode into the Toronto Four Seasons Hotel on a Saturday morning, all smiles and apologies for being late. The café was empty, except for myself, a handful of patrons, and a young waiter who had recently immigrated from Ukraine. I told him who I was waiting for and he smiled.

Saakashvili is only forty-nine, but has accomplished more politically, and can drop more names, than the previous three US presidents combined. He became president of Georgia in his thirties, turned the country around, was nearly assassinated with his good friend George W. Bush, stared down Vladimir Putin, and became a Ukrainian citizen to join the effort to transform Eastern Europe’s sleeping giant.

He supported the Euromaidan from afar then was recruited by President Petro Poroshenko, a university pal. Months after becoming an adviser, Saakashvili convinced Poroshenko to appoint him as governor of Odesa oblast to reshape the corrupt port. For less than one year, he ruled with an iron fist and began cleaning up port operations, then suddenly announced his resignation in a typically dramatic fashion. At a press conference, he accused Poroshenko of supporting “corrupt clans in the Odesa region.”

He is unusually forthcoming as an interviewee. “By my own standards, I failed on every account in Odesa. We proved that it was possible to operate customs without corruption. Some people miss this. But we only accomplished 5 percent of what we wanted to do.”

Nonetheless, Saakashvili is committed to Ukraine’s struggle. “This is selfish because if I can help build two difficult countries that would be an achievement. I’m optimistic. Georgia was worse when I took over than Ukraine is now, and you can see the difference,” he said. “Ukrainians by nature don’t accept authoritarianism, and are more law abiding and today they are more ready for change than Georgians were in 2003.”

Ukraine is also on his agenda because it is the lynchpin to liberating the entire region from Putin. “Russia’s going to explode, but it depends on Ukraine. If it does well, then Putin explodes,” he said. “The plan was to take the east, destroy Ukraine’s army, sabotage its government, and leave it in ruins. Now [Putin] can only wait for its collapse. That’s why Ukraine must grow economically.”

He knows US President Donald Trump from his New York years as a lawyer and activist, but his views remain “unknown,” which is encouraging violence by the Russians in Ukraine’s east. “Putin is taking advantage of the uncertainty in DC so his aggression increases in Ukraine,” he said. “I know Trump well. . . . In the long run, he might be good for initiating change.”

Since leaving Odesa, Saakashvili has gone on an anticorruption “tour.” His polling is low, but he is encouraged because the need to reform gains popularity as the electorate searches for an alternative to the status quo. He was in Canada to help raise awareness and funds on behalf of the Canada-Ukraine International Assistance Fund, a diaspora organization which organized the interview.

Saakashvili is larger than life, physically and psychologically. He is animated, talks rapidly, and snacks on strawberries during the interview. He speaks five languages fluently, was born and raised in Georgia, attended university in Ukraine, and has lived off and on in the United States where he earned a prestigious fellowship from the US State Department as well as a law degree from Columbia University in New York.

In Georgia, he obliterated its corrupt bureaucracies, privatized, and cracked down on wrongdoers. He faces charges in his home country that, he said, are bogus and designed to keep him out of the country. However, his critics say that he overstepped and misused his power.

Saakashvili supports similar policies in Ukraine, notably the new National Anti-Corruption Bureau of Ukraine (NABU) and the creation of an Anti-Corruption Court. He wants Kyiv to implement the “very unusual” stipulation by the IMF, contained in its latest memo, that NABU must “be given the right to wiretap telephones.”

Even so, NABU, Ukraine’s FBI, has just made three of the highest profile arrests in the country’s recent history, including Roman Nasirov, former head of customs; and political kingpin Mykola Martynenko.

“Martynenko is the more important of the two. He is the Godfather of the Ukrainian political class,” he said. The judge let him go without bail after seventeen members of parliament and three ministers came to court in support, a move he described as “cynical.”

“But what’s important is for people to see such important people in handcuffs in Ukraine,” he said.

What if they skip the country?

“These cases won’t disappear, the evidence has been gathered for extradition purposes. They cannot go to the West like [Dmytro] Firtash, who’s being pursued all over the place. And they won’t go to Russia.”

The Anti-Corruption Court will be created, he asserted. “It can use the same selection process as was used for NABU, clean, built from scratch, and by paying good people high salaries,” he said. “It will need just one hundred judges and this will be possible to recruit. This will go a long way.”

Saakashvili now has a weekly television show in Ukraine and intends to run in the next election. He cannot be president, because he was not born in Ukraine, but he will likely seek a seat in parliament or end up playing another role in a reform-minded government. His goal is to enable a reform movement that will win the next election, and he believes the time is right.

The Orange Revolution failed because power was handed over to the same old guard, he said. The Euromaidan “brought to life a new civil society, a New Ukraine, a new political class,” he said. The “third Maidan” will be in the form of an “electoral earthquake,” he predicted. “The public wants to wipe out the entire political class and polls are showing this. New people are stepping up to run.”

The next national election is not until 2019 and he would prefer a snap election so that the oligarchs—who control the media and the levers of power—cannot have time to try and manipulate outcomes.

In the meantime, however, he is opposed to proposed land reforms because he says Poroshenko has a conflict of interest. The president is already one of the three biggest landowners in the country and the same oligarchs will acquire even more land if they have their way, Saakashvili said.

Likewise, he believes the decision to charge market prices for gas was half-baked. Saakashvili differs from the view of the IMF and the European Bank for Reconstruction and Development, which argue that establishing a single market price for gas was critical for reducing Ukraine’s huge budget deficit and ending the country’s dependence on Russian gas.

Saakashvili complains that the energy sector beyond Naftagaz—resources, generation, and distribution—is controlled mostly by oligarchs who continue to inflate prices by funneling purchases of Ukrainian gas through offshore companies in Cyprus.

“There is no transparency and people are right to complain about prices. This is not about populism, it’s about fairness,” he said. But he believes that Yulia Tymoshenko is wrong to propose the government take control again.

The solution is to impose anti-trust laws on the entire country to reduce concentration of ownership levels in all sectors; make ownership transparent; and allow foreigners to buy stakes and create competition. He believes that government enterprises should also be privatized but sold in pieces, not as monopolies and not to oligarchs. “Then, in the long run, the oligarchs would be put in a room and offered two exits: Prison or pay back everything and get freedom.”

Saakashvili is a force, not the focus, for change and he is confident that the third “Maidan” will be peaceful. “Ukrainians are remarkably self-disciplined and restrained in terms of violence. The country is full of weapons, and unemployed soldiers, and there has been no bloodbath and won’t be,” he said.

The interview ends. He is already late for his next meeting with supporters, but before he leaves I introduce him to our Ukrainian waiter. Saakashvili’s face lights up and they chat warmly in Ukrainian. He asks him if he likes Canada and would ever move home if the situation improved. He nods yes and Saakashvili points to him and says: “That’s why Ukraine will be a great nation because most of the millions who have left will come home and build a great country.”

Then the two shake on it.