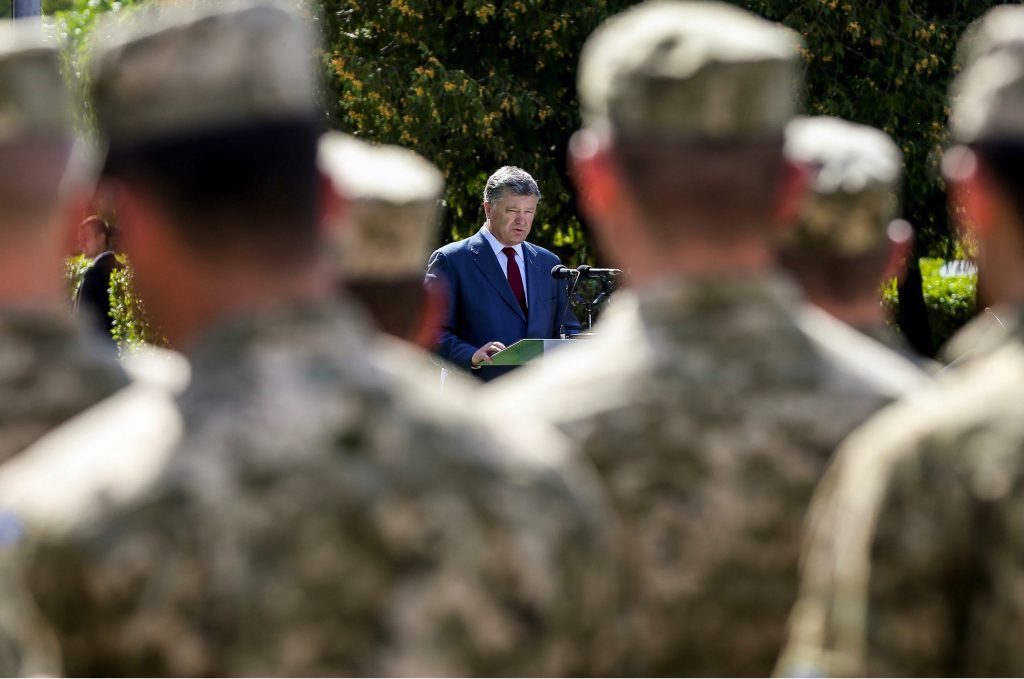 In December 2015, the anticorruption watchdog Transparency International warned that Ukraine’s defense sector faces “a high risk of corruption.” TI named the country’s opaque procurement process as the highest-risk area for corruption. Assessing the defense spheres of NATO members and partner states, TI gave Ukraine a D on an A to F scale, primarily for its lack of transparency.

Fortunately, this problem has not gone unaddressed. At the behest of the Ukrainian government, the RAND Corporation studied Ukraine’s defense sector. Its findings, “Security Sector Reform of Ukraine,” were issued a year ago but published only recently. In response, this summer the Ukrainian government adopted a comprehensive reform program for the defense and security sector, the Strategic Defense Bulletin. Relying mostly on the recommendations presented in the RAND study, the document is a road map for the defense sector’s overhaul, covering the overall architecture of the security sector, the structure of defense institutions, the use of resources, cybersecurity, and cooperation with global partners. The bulletin is in line with NATO standards, and received positive feedback at the NATO Summit in Warsaw in July.

RAND found that Ukraine’s security situation changed drastically with Russia’s illegal annexation of Crimea and aggression in eastern Ukraine. The new threats put the country’s defense capability to the test and have made the need for defense and security reform more acute. Since the beginning of the conflict, the military has come a long way in improving logistics and provisioning, and strengthening military training programs in cooperation with allies. But more is required to turn it into a modern and efficient institution.

Ukraine’s reform package involves all security institutions and is not limited to the Defense Ministry and the General Staff of the Armed Forces of Ukraine. The bulletin incorporates most of RAND’s recommendations, including clarifying the delineation of authority to ensure efficient use of resources, changing the Ministry of Defense and the General Staff’s structure to be in line with NATO standards, establishing reliable communication and logistics, and adapting the military and industrial sectors to NATO’s standards.

One of the big recommendations in the RAND study concerns the outsized role played by Ukroboronprom, which owns about 120 armament companies. Created in 2010 by then-President Viktor Yanukovych, the holding united most of the profitable state-owned enterprises in the defense sector. Its inefficient management in 2010-2012 resulted in a sharp deterioration of the holding companies’ financial situations and is often seen as one of the reasons Ukraine’s military and industrial complex was in such a poor state at the start of Russia’s aggression.

In the RAND study, Ukroboronprom is criticized for its lack of transparency and possible conflict of interests, as the company is both a major producer and a major importer of defense goods. In the spirit of ongoing privatizations in the non-military sector, the RAND study recommends Ukraine should conduct an audit of state-owned companies in the defense sector and perform triage on them, separating them into three groups: those which should be retained in state ownership, those which merit privatization, and those which should be liquidated. Such a transparent approach would help to attract investment and revive Ukraine’s military and industrial complex.

Ukroboronprom officials were not ready to adopt RAND’s approach in full, but they recently announced that the company will create a supervisory council, order an independent audit, and undergo a reorganization—all of which is a step forward.

Some other recommendations included in the reform plan are less robust versions of those in RAND’s report, however. For example, in outlining a new structure for the defense sector, RAND recommends ensuring civil control of the military by appointing a civil minister of defense and empowering him or her to operate the military command and control; the chief of staff is to be administratively subordinate to the minister of defense. While these recommendations are reflected in the Strategic Defense Bulletin, the role of the minister of defense as the major driver of reform has been weakened as a result of internal discussions. The timeline provides for the structural reform of the Ministry of Defense and the General Staff to come first in 2016-2017, with the civil minister of defense not appointed until the end of 2018.

Another area in which a more robust schedule is needed is personnel reform. The RAND study points out that with the Anti-Terrorist Operation Zone (ATO) being a high-intensity conflict, the quality of the force is more important than its numbers. Nonetheless, the military is currently relying mostly on conscription and mobilization to fill its ranks, an arrangement that is costly and inefficient. Ukrainian authorities have pledged to transition to a professional army this year; together with international partners, they have implemented intense personnel training programs. Still, the system of compensation and motivation, as well as a formalization of the process of promoting those who have performed well, are still lagging behind. Making the military’s compensation comparable with positions in the civil sector, as proposed by RAND, was included as a goal in the bulletin. However, the first step of linking military compensation to the legislatively mandated minimum wage is not scheduled to occur until the end of 2017.

Most defense procurement is done in an uncompetitive manner using sole-source procurement contracts, which limit competition. Procurement of weapons and equipment is secretive and performed in line with the classified State Defense Order. Both the RAND study and the government bulletin provide for decreasing the secrecy and increasing competition. According to the reform program, additional legislation will be required to transfer procurement of conventional weapons to the general procurement system, and it sets a distant deadline of 2020 for the reform. However, the report on the defense sector prepared by a group of MPs and publicized on October 18 called for amending the requirements for classifying defense procurement, suggesting that Rada members know exactly what’s going on. The Ministry of Defense should use this reform momentum in the Rada to act on the required legislative changes.

A separate part of the RAND study deals with improving the standards of international cooperation by Ukraine’s military. Ukraine needs the support of its international allies to overhaul its security and defense sector and be prepared to act efficiently in response to new threats. Ukraine should work to strengthen international cooperation and earn a reputation as a trusted partner by addressing the problems that its providers of help and technical assistance currently face. Ukraine still has a long way to go in improving coordination, feedback, control, and accountability over the assistance already received.

Still, after two and a half years of intense military operations, the army remains the most trusted official institution in the country. Now it needs to become truly modern and efficient in order to live up to those high expectations and get a passing grade.

Oksana Bedratenko, a UkraineAlert contributor, is an independent analyst based in Washington, DC; she formerly served as the Senior Local Economist at the US Embassy in Kyiv. She tweets @Bedratenko.

Image: Ukrainian President Petro Poroshenko addresses servicemen of the 16th separate army aviation brigade and relatives of pilots, who were killed in the fighting in eastern Ukraine, in the city of Brody, Ukraine, August 18, 2016. Mykhailo Markiv/Ukrainian Presidential Press Service/Pool via Reuters