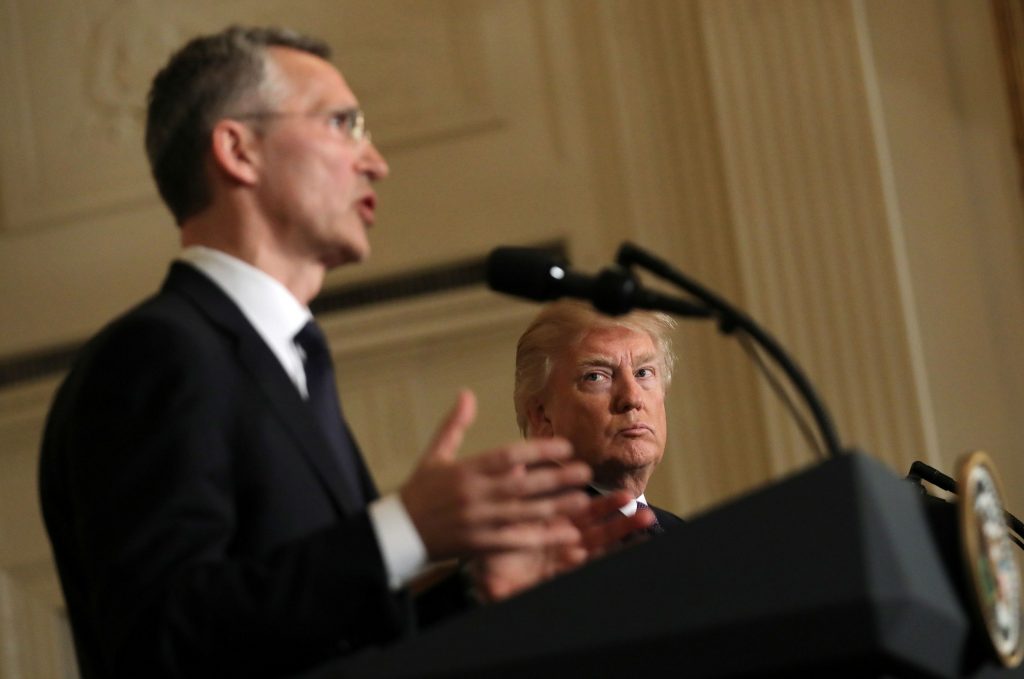 When US President Donald Trump attends the NATO summit in Brussels on May 25, he should press the Alliance to confront Moscow’s conventional military superiority and nuclear blackmail tactics, rather than endlessly needle the Europeans about defense spending.

NATO undoubtedly needs additional funding sources, but the unwillingness of European countries to meet their 2 percent of GDP pledge isn’t NATO’s real problem. Rather the real problem is its unwillingness to realize that Europe is not at peace and will not be for a considerable time to come. NATO’s response to Russian threats to European security has been too slow and halting. As a recent Rand report suggests, European forces are still not ready for prime time. Consequently, NATO faces both conventional inferiority on the Baltic, Balkan, and Black Sea flanks and nuclear blackmail by Moscow.

If NATO is to avoid a condition of permanent inferiority and inability to defend its members that belie its claims to be a security provider, there needs to be some candid talk at the summit. Discussions must address the root of the problem: Russia has broken every arms control treaty pertaining to Europe, and this cannot be allowed to go on. Russia’s recent snap exercises violate the Vienna Document; Russia has also broken the INF treaty, and we have known about it since 2008 and done nothing. Moscow “suspended” its participation in the Treaty on Convention Forces in Europe, an action that has no legal standing, and has allowed it to break the limits on forces in Europe. And, of course, it broke numerous treaties by invading Ukraine.

Moscow also seems prepared to use its nuclear weapons, probably its tactical nuclear missiles, in a first-strike mode either against military targets or against European capitals. By 2018, it will have reached the numerical limits of the new START treaty and will have to draw down to 1,500 strategic weapons as stipulated by the treaty. Based on current figures, this means Moscow has to dismantle over 200 weapons within a year. To judge from previous Russian policy, this is not likely to happen; Russia’s priority defense project is modernizing its nuclear forces. Finally, a look at Russian nuclear and hypersonic weapons programs indicates that Moscow is also building weapons with which to threaten the United States and Europe.

NATO needs to get real, now and fast. NATO must confront the fact that Europe is no longer a theater of peace and that even nuclear war is possible. Therefore, it has to augment its conventional capabilities to prevent Moscow from thinking that it could pull off another fait accompli like Crimea, and confront NATO with nuclear threats. A robust conventional deterrent not only defends against conventional threats, it also negates Russia’s strategy by ruling out the idea of a short, victorious war. But NATO also has to face the nuclear issues that it has studiously avoided and mount a response that deters Russia from its nuclear threats without provoking a war. That will undoubtedly be a long discussion, but it has to begin from an accurate assessment of reality. European security must be rebuilt during a time of conflict, and real penalties for breaking arms control treaties must be exacted.

Russia has long believed that it is at war with the West, and Europe must recognize that therefore it is at war with Russia since virtually every European government is under information attack by Russia. On January 18, 2005, Defense Minister Sergei Ivanov told the Academy of Military Sciences, the official institutional locus of systematic thinking about contemporary war that, “…there is a war against Russia under way, and it has been going on for quite a few years. No one declared war on us. There is not one country that would be in a state of war with Russia. But there are people and organizations in various countries, who take part in hostilities against the Russian Federation.”

The ongoing revelations of the extent of Russian information warfare, subversion, coups, and interference in the US and European elections are acts of war, and are regarded by Russian writers on contemporary and information warfare as such. But they are also backed up by potent military threats that are used to intimidate Western audiences before a shot is fired.

We allowed this situation to develop by ignoring countless arms control violations, and these agreements constituted the foundation of European security after 1991. The failure to rebuild an effective and durable structure of European security that includes Ukraine, other pro-Western post-Soviet states, NATO, and EU members will only intensify and accelerate the challenges we face. For in this matter as Peter the Great told his subordinates, “All delay is like death.”