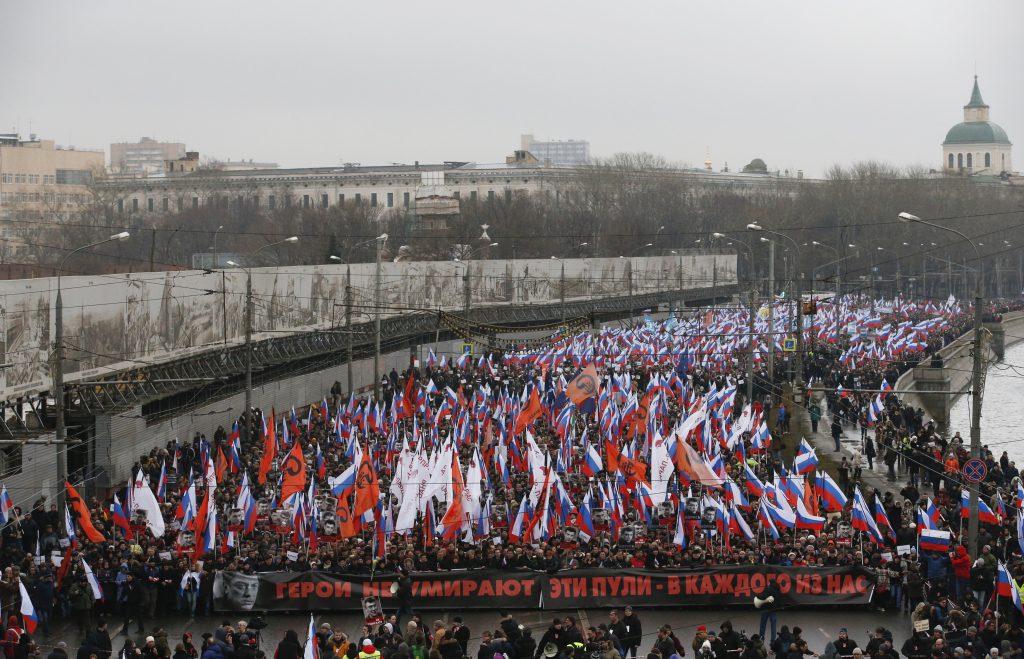 The professional killing of Boris Nemtsov February 27 confronts us with two facts that Western policymakers ignore at great cost in the Russia-Ukraine war. First, Mr. Putin’s war in Ukraine is potentially a great domestic political liability for him. Second, it is central to his campaign to crush all democratic inclinations so as to force Russia back under into the authoritarian rule it bore for centuries under tsars and Soviet commissars.

Mr. Putin’s vulnerabilities in this war may be obscured by his surge in popularity last year after he “annexed” Crimea. But while Russians have applauded his nationalist posturing, polls have shown that most Russians (as many as 58 percent) oppose sending Russian troops to fight in Ukraine. Given that Mr. Putin already is doing this, he is trying at great cost to hide that fact from his people.

Former Deputy Prime Minister Nemtsov was a fading political figure. Alexander Navalny had long ago replaced him as the face of the opposition. But Nemtsov was preparing a paper documenting the role of Russian troops in Mr. Putin’s war against Ukraine, according to close associates, and had taken the lead in organizing the rally today (March 1) against that war. Since the rally turned into a memorial for Mr. Nemtsov instead of a possible exposé of the Kremlin’s war of aggression, at first glance the hit looks like a win for Mr. Putin.

Hiding the War From Russians

While Mr. Nemtsov was no threat to the Kremlin as an opposition leader, his effort to inform the Russian public about the use of Russian troops in the war was a danger. The Kremlin is burying its war dead in secret and ordering the wounded, on penalty of losing military benefits, to not say where they received their injuries. In August Mr. Putin had the Committee of Mothers of Russian Soldier labeled a “foreign agent’ and therefore subject to onerous restrictions after its leader declared that Russian soldiers were fighting in Ukraine. Mr. Nemtsov was dangerous because he was still a high-profile figure and his laying out the evidence for the presence of regular Russian troops in Ukraine would have pierced Mr. Putin’s propaganda curtain, at least in Moscow.

Properly understood, this means that Western policies that help inform the Russian people that Russian soldiers are fighting in Ukraine make it harder for Mr. Putin to continue his war of aggression. This is an argument both to increase substantially the budgets for broadcast stations like Radio Liberty, and to provide defensive military weapons to Ukraine. Providing weapons would either deter further aggression, or, by leading to more Russian casualties, make it harder for the Kremlin to hide its war from its own people.

Nemtsov’s assassination also underlines that the fight for Ukraine is simultaneously a struggle for the freedom of the Russian people. The great Russian historian Vasiliy Klyuchevsky wrote in the late 19th century that “the foreign territorial expansion of the Russian government moves in inverse proportional relationship to the development of the internal freedom of the people” (Russian History, Volume II, Lecture XLI). Since returning to the presidency in 2012, Mr. Putin has introduced an increasingly authoritarian regime.

To build up support for his aggression in Ukraine, Mr. Putin’s propaganda campaign has sounded increasingly hard nationalist themes including shrill attacks on alleged “fifth columnists,” or traitors in the midst of the Russian nation. While it is quite likely that we will never know who ordered the killing of Mr. Nemtsov, the stark atmosphere against “traitors” certainly created the atmosphere for it and for further attacks on the liberties of those who do not agree with the Kremlin’s policies in Ukraine or elsewhere.

By helping the reformers in Kyiv blunt Moscow’s aggression and develop a democratic and prosperous Ukraine outside of Donbas and Crimea, the West also will be dealing a shot at the authoritarianism that hinders the liberty and prosperity of the Russian people. (The re-acquisition of Crimea and the Donbass can be better addressed at a later stage.) In this light, stronger sanctions and military support for Ukraine are tools that either persuade Mr. Putin to cease his aggression or oblige him to face increasing problems at home—problems that at some point may usher in a government, under Mr. Putin or someone else, better disposed to the freedom and well-being of the people of Russia. Those advocating kid-glove treatment for Mr. Putin are doing the Russian people no favor.

John E. Herbst is director of the Dinu Patriciu Eurasia Center at the Atlantic Council. He served as the U.S. ambassador to Ukraine from 2003 to 2006.

Image: Tens of thousands of Russians march along the Moscow River Sunday (March 1) to protest the assassination of the pro-democracy opposition leader Boris Nemtsov, who was preparing to release a report detailing evidence that the Kremlin is sending Russian troops to fight in the Ukraine war. The long banner reads: "Heroes do not die. These bullets are meant for each of us." (Reuters/ Maxim Zmeyev)