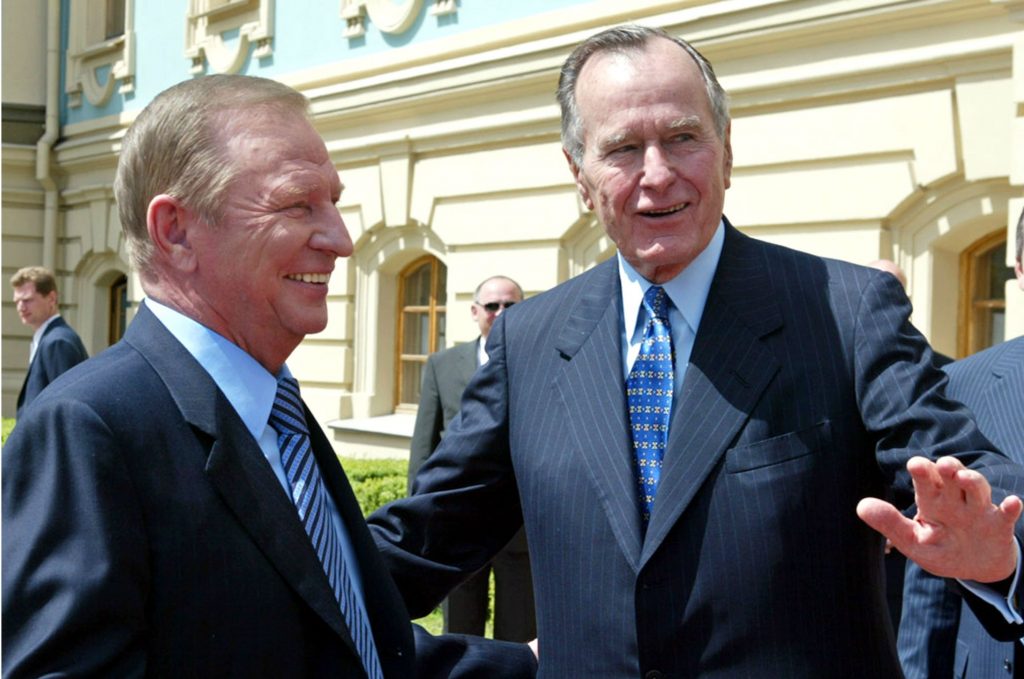 Ukrainian President Leonid Kuchma (L) listens to former US president George Bush before talks at the Presidential palace in Kyiv, May 21, 2004. Bush is on a two-day private visit to Ukraine to meet the country's political and public leaders. REUTERS/Pool YYK/ACM

Ukraine has played an important role in US foreign policy since it became independent in 1991. So far, this topic has received scant scholarly interest. The most substantial book to date was Sherman Garnett, The Keystone in the Arch: Ukraine in the Emerging Security Environment of Central and Eastern Europe, which was published in 1997, so a new look is long overdue.

In his new book, The Eagle and the Trident: US-Relations in Turbulent Times, Ambassador Steven Pifer offers a detailed and well-written study of US policy on Ukraine from 1991-2004 in 366 pages.

During those years, Pifer held key positions in the formation of US policy on Ukraine in the State Department, at the National Security Council, and from 1998-2000 as US Ambassador to Ukraine. He knows the making of US policy on Ukraine inside out and he is meticulous, making this book an invaluable resource. I have failed to find any inaccuracies.

Structured in chronological fashion in eight chapters, the first chapter deals with the establishment of relations, chapter two with nuclear weapons, and chapter three with the blossoming of relations 1995-97. The next two chapters address the downturn and the Orange Revolution. The seventh chapter covers the long period 2005-2017 more superficially, when Pifer was no longer directly engaged in US policymaking on Ukraine. The final chapter draws lessons and policy recommendations.

This is a nuanced and honest account, characteristic of the earnest Pifer. It is excellent that such an insightful and well-documented book has been published because too many myths have accumulated about what the United States has actually done in Ukraine, especially on the Russian side but also on the Ukrainian side. Repeatedly, Pifer emphasizes how the Americans said one thing, and the Ukrainians heard something else.

The book depicts how US foreign policy is made. Initially, leading policymakers provide major input, but policy is later formed at the level of the US ambassador to Kyiv, the senior director at the National Security Council, and primarily deputy assistant secretaries at State, the Pentagon, and the Treasury, while the superiors merely listen. An outsider may be surprised by how few people actually mattered.

US goals can be summarized in three phrases: get rid of Ukraine’s nuclear arms, defend Ukraine from Russia, and support political and economic reform.

Pifer is upright: “No goal figured higher on the US agenda for Ukraine than ensuring the elimination of [nuclear] weapons—and it no doubt often seemed to many in Kyiv to be the United States’ only goal” (p. 5). The man who set this agenda was Secretary of State James Baker, who made a quick trip to the relevant Soviet republics in mid-December 1991, and it has lasted.

In hindsight, the US preoccupation with the danger of “loose nukes” appears misdirected. After Russia’s military aggression against Georgia in 2008 and Ukraine since 2014, the sovereignty and territorial integrity of post-Soviet republics would have appeared more relevant.

But the United States was not ready. “Washington wanted nuclear weapons out of Ukraine, but neither the Bush nor the Clinton administration was prepared to offer [any] kind of guarantee” (p. 76). In the infamous Budapest Memorandum of December 1994, the United States, the United Kingdom, and Russia offered Ukraine security “assurances” if it gave up its nuclear arms. Pifer notes “that ‘guarantee’ and ‘assurance’ both translate as ‘guarantee’ in Ukrainian and Russian” (p. 59). “Kyiv treated the memorandum as, in effect, an international treaty” (p. 71). President Leonid Kuchma still insists that he was cheated when signing that memorandum.

Otherwise, the United States showed considerable understanding of the importance to defend Ukraine against Russia. It was deeply concerned about Ukraine’s sovereignty over Crimea and Sevastopol, over the complexity of the Black Sea Fleet, and the many economic conflicts between Russia and Ukraine.

Pifer’s prime specialization is disarmament, but I fear that he accurately reflects how little attention US authorities paid to economic reform in the early years of Ukraine’s independence. It took nearly three years before the Freedom Support Act funding started flowing into Ukraine. The United States missed the window of real opportunity in the early 1990s. Far too late, it realized that extreme rent seeking had developed. Rather than seeing the root of the problem in the economic system, the US got bogged down in multiple business disputes, whose essence was that property rights had not taken root. From 1999, democracy became a major US concern.

In this highly readable account, Pifer explains why the United States succeeded in ridding Ukraine of nukes but failed to contain Russian aggression or spur irreversible reforms. US engagement was considerable, and it is striking how the United States accomplished what it focused on, but it often lacked focus until too late.

Anders Åslund is a senior fellow at the Atlantic Council and the author of two books about Ukraine’s economic reform process.