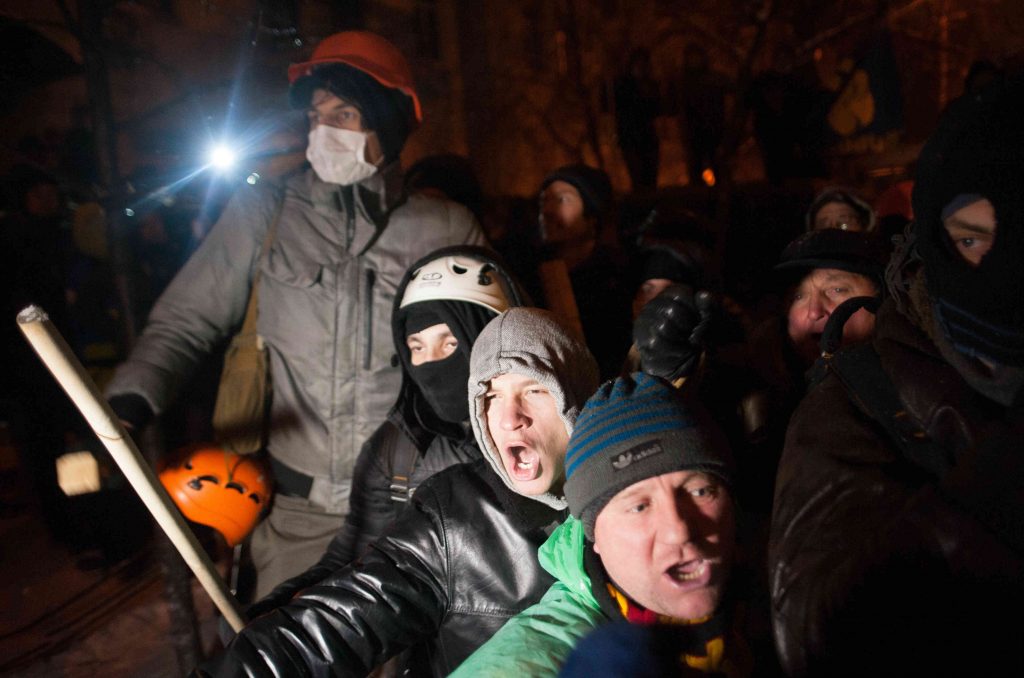 History is mostly curated and told years or even centuries later by persons not directly involved.

But the twentieth century video camera brought us history on the run, produced by journalists, and now the cell phone records events and stories told by the participants themselves in real time.

The finest example of this New History is the newly released Netflix documentary, “Winter on Fire” or the story of Ukraine’s Revolution of Dignity that overthrew an oppressive and violent regime in ninety-one days.

The film is chronological and chaotic, just as history is, and an editing triumph comprised of amateur footage, spliced with stories of major battles and people. This was truly a grassroots revolution that began with students on a cold and rainy November 21, 2013.

They had gathered for a peaceful protest on Kyiv’s Maidan, at its Independence Square, to support Ukraine’s membership in the European Union following reports that their President Viktor Yanukovych was going to renege on his promise to do so. As it turned out, he had signed a secret deal to join Russia’s economic union.

On November 29, 2013, his refusal to join Europe became public and the protesters grew in number, chanting “shame” and “revolution.” That is when riot police, clad in black helmets and shields, arrived and the first beatings of protesters occurred. These events are dramatically depicted.

A man, a heart surgeon, watched then joined the protest, explaining that the revolution was necessary because spurning Europe “stole our children’s future.” The beatings steeled the protesters, and on December 2 they determined to stay and began building barricades, out of park benches, building materials, and barbed wire. Tents, soup kitchens, and makeshift hospitals sprang up as did tall scaffolding, festooned with flags and loud speakers, a gigantic screen, and temporary stage for speakers. They were preparing for a siege.

On December 8, they organized a march of one million men, women, and children to protest “against the police state” and violence. The police put up barriers to block the march, but protesters responded by driving a bulldozer with a Ukrainian flag through one. Police responded with tear gas, stun grenades, and more beatings. Police then moved toward the Maidan, determined to wipe it out, but a dramatic tipping point occurred. At 1:30 am on December 11, as protesters were making their last stand, the bells at Kyiv’s iconic St. Michaels Golden-Domed Monastery several blocks away rang out for the first time since 1240—the year they sounded to warn of a Mongol invasion. The alarm caused tens of thousands of Ukrainians to leave their homes and come on foot to support the Revolution. “The bells brought everyone out,” the narrator said.

It also brought out the nation. Army veterans and others joined on to train frontline protesters in self-defense techniques, secure its perimeter, and keep out alcohol and troublemakers. They fortified the barricades and food, medicines, and volunteers began pouring in from across the country.

On January 16, the corrupt Rada imposed new draconian laws that banned assembly, Internet access, masks or the orange helmets that the protesters wore. Ukrainians, young and old, openly defied the restrictions by putting cooking pots on their heads and donning costume masks.

On January 19, 200,000 protestors gathered at the Maidan to protest the new laws and tried to march to the Rada. The government responded by adding troops to help the police and began shooting rubber bullets. “The third man with no eyes” was brought into hospital, relates the narrator, and “we are burning tires to keep them from attacking us.”

Protesters responded with Molotov cocktails and bricks. Priests with huge crosses read scripture and stood between police and protesters.

By February 18, tanks were on the streets and a Maidan landmark, the Trade Union Building, was firebombed and destroyed, its hospital inside, leaving twenty dead and 400 wounded.

The documentary’s cameras show people dying on the streets, including a man holding a Red Cross flag ministering to a sniper victim. After the slaughter, a speaker in camouflage gear mounts the stage and demands that “Yanukovych must resign by 10 am tomorrow. If not… we will go on an armed offensive.”

Yanukovych fled the night of February 22.

In the end, 125 were killed, five remain missing, and 1,890 were injured. But that was not the end of the struggle. The film ends with an epilogue noting that a deal with Europe was signed, but that Russian-operatives seized Crimea and parts of the Donbas. Since then, a war with Moscow has displaced more than 1.4 million Ukrainians and killed 7,900 more Ukrainians. And impatience grows because many of the same oppressors haven’t been prosecuted.

So the Revolution of Dignity is far from finished. But “Winter on Fire” is a fitting testament to the remarkable Ukrainian people who are determined to finally become a free European nation.

Image: Groups of protesters face a deployment of riot police on December 10, 2013. At 1:30 am on December 11, as protesters were making their last stand, the bells at Kyiv’s iconic St. Michaels Golden-Domed Monastery rang out for the first time since 1240—the year they sounded to warn of a Mongol invasion. Credit: Mstyslav Chernov/Creative Commons