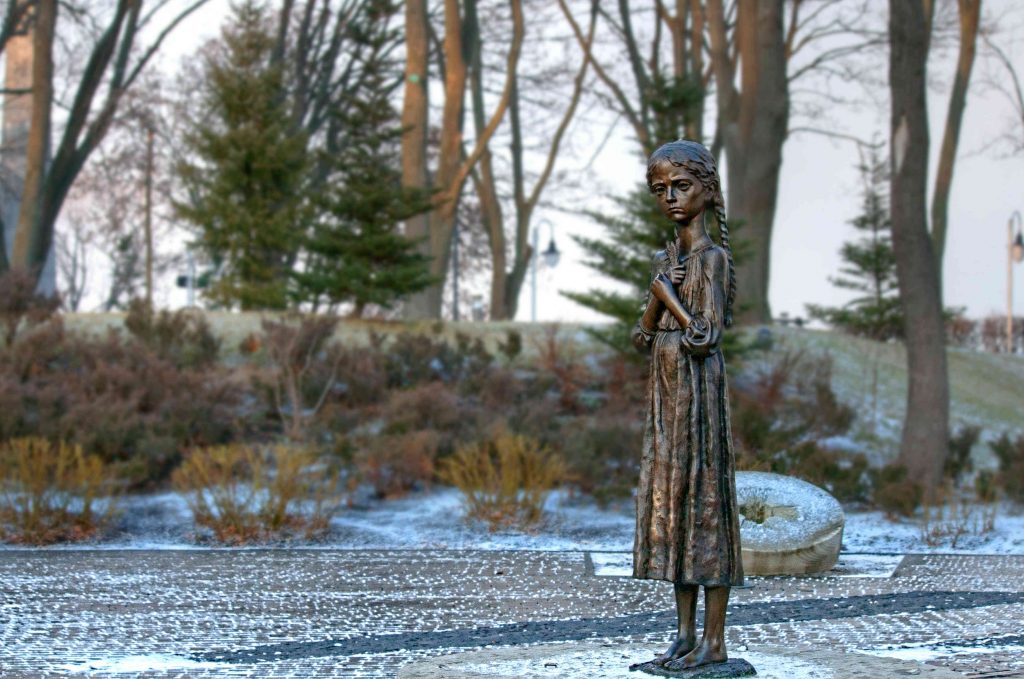 Ukraine is a nation interrupted, its identity and promise stolen by invaders and predators for centuries.

Ukraine’s principle oppressor has been, and remains, Russia where leaders like Russian President Vladimir Putin propagate the fiction that Ukraine is “little Russia.” But the two are distinctive and the Ukrainian language is as different from Russian as is Spanish from French.

Putin’s postulation is not only inaccurate, but deeply hurtful and insulting, given Russia’s historical and ongoing abuse of Ukraine. In the 1930s, Joseph Stalin perpetrated one of the greatest crimes against humanity by purposely starving to death millions of Ukrainians for resisting his Five-Year Plan to collectivize agriculture.

Finally, a film will be released in the new year that portrays Stalin’s monstrous policies and how they brought about The Great Famine of 1933, known in Ukrainian as the Holodomor (death by starvation).

The new movie is entitled Bitter Harvest and stars veteran actor Terence Stamp and new British sensation Max Irons, in his first leading role. It is a love story set during one of history’s darkest moments and portrays events most don’t know and cannot imagine.

Canadian Ian Ihnatowycz produced this film to set the record straight for the West about the suffering of Ukrainians at the hands of Russia, a reality that still continues. His parents and grandparents fled the country during the Second World War.

“Like all Ukrainians, my family suffered enormously,” he said. “There isn’t a Ukrainian alive who doesn’t know about the persecution, executions, and starvation. Given the importance of what happened, and that few outside Ukraine knew about it because it had been covered up, the story of this genocide needed to be told. It’s relevant today.”

The scale of The Great Famine remained hidden by the Soviets, but in 1991 Ukraine declared independence and opened the Soviet archives. These revelations led to a 2003 United Nations Joint Statement, signed by Russia, that declared the Holodomor had taken seven to ten million innocent lives. Then on October 23, 2008, the European Parliament adopted a resolution recognizing the Holodomor as a crime against humanity.

The movie is a fitting backdrop to the current violence against Ukraine by Russia. In 1933, alarming reports about mass starvation were reported in the British press, but ignored in the United States. That same year, the United States officially recognized the Soviet Union and in 1934, Stalin won membership into the League of Nations.

Today, concern about Russia’s illegal invasion of Ukraine has been muted considering that it is Europe’s largest country, the size of Germany and Poland combined, with 45 million people.

Several books about the Holodomor have been published since but the most comprehensive is Bloodlands: Europe Between Hitler and Stalin, written in 2010 by Yale Professor Timothy Snyder. The slaughter he documents and details is, quite frankly, difficult to comprehend.

“More than five million people starved to death in the Soviet Union in the early 1930s, most of them in Soviet Ukraine. The hunger was caused by collective agriculture, but the starvation was caused by politics,” he wrote.

During the Great Terror of 1937 and 1938, “the Soviet leadership identified peasants, the victims of collectivization, as the prime threat to Soviet power. Nearly 700,000 were executed, although the true number may be somewhat higher,” he wrote.

Another 300,000 were executed by Ukrainian government puppets of Moscow and hundreds of thousands more shipped off to Gulags and work camps.

Then the Second World War followed. In 1941, Hitler invaded Soviet Ukraine and Belarus. Between 1933 and 1945, Snyder estimates that a total of 14 million non-combatants were killed by Stalin and Hitler in the Bloodlands, principally Ukraine, Poland, and Belarus.

The Holocaust, that killed six million Jews across Europe, took place during this time and has been well documented and depicted. But Bitter Harvest represents the first feature film to expose the world to the catastrophic Holodomor mass murder.

Naturally, the film is disturbing. Stamp’s performance is riveting, as the patriarch of a family facing extinction, as is Max Irons’ poignant portrayal of Stamp’s grandson, a young artist and that of Samantha Barks as his lover.

Irons and Barks are ranking members of the “Brit Pack,” young and talented artists from United Kingdom who are successful internationally. He is best known for his roles in The Riot Club in 2014, The White Queen and The Host in 2013, Barks for her performance in the movie version of Les Miserables, and Stamp is an acclaimed veteran of stage and screen.

Distribution plans are being negotiated and the film should be available to the public in 2016.

The movie was filmed at Pinewood Studios and on location in Ukraine where final scenes were shot days before Ukraine’s corrupt former President opted in late 2013 to join Russia instead of the European Union. That decision sparked mass street protests throughout Ukraine and eventually his overthrow.

In spring 2014, Putin took advantage of the chaos and sent in operatives to destabilize and occupy Crimea and the Donbas. His objective was to invade and annex most, if not all, of Ukraine, but resistance has been heroic.

“It’s ironic that before we even finished our film we had yet another example of Russia’s aggression against Ukraine,” said Ihnatowycz.

This time, Ukraine is once more a victim of Russian predation and once again a casualty of Russian propaganda and tepid concern by world leaders.

For these and other reasons, Bitter Harvest is an important movie that everyone should see. Its relevance is undeniable and enlightening.

This is the real narrative of Ukraine, an unbowed but bruised nation with defiant resilience, still yearning to be free.

Image: At the Holodomor Memorial in Kyiv, Ukraine. Finally, a film – Bitter Harvest – will be released in the new year that portrays Stalin’s monstrous policies and how they brought about The Great Famine of 1933. Credit: Creative Commons/Matt Shalvatis