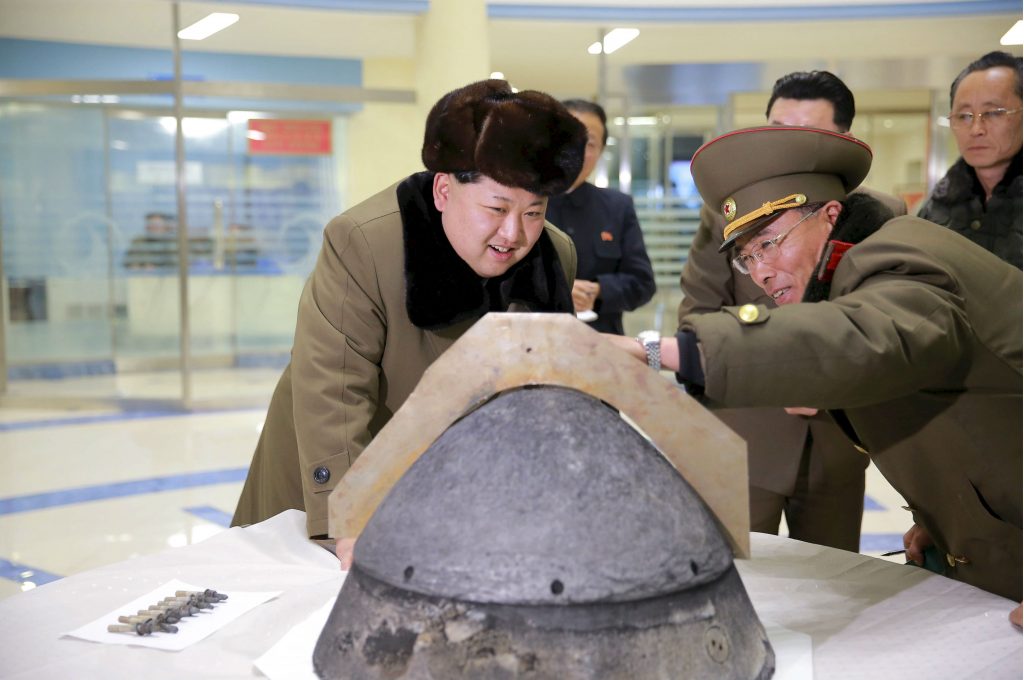 North Korean leader Kim Jong Un looks at a rocket warhead tip after a simulated test of atmospheric re-entry of a ballistic missile, at an unidentified location in this undated file photo released by North Korea's Korean Central News Agency (KCNA) in Pyongyang on March 15, 2016. REUTERS/KCNA/Files

A new report points to Ukraine as a possible source of liquid propellant engines (LPE) powering intercontinental-range missiles successfully ground-tested by North Korea last year and flight-tested this year. As the world grapples with the fait accompli of North Korean nuclear and missile capability, the path Pyongyang took to acquire it is of considerable interest, and allegations of aiding it are of serious consequence.

The report, authored by Michael Elleman of the International Institute for Strategic Studies, attributes the sudden success of North Korean missile tests to a recent illicit transfer of technology from Russia or Ukraine. Elleman uses visual analyses to identify North Korean missile LPEs as derived from RD-250 engines designed by the Russian Energomash and manufactured by Ukraine’s Yuzhmash enterprise. On the same day, The New York Times ran an article drawing on Elleman’s report but more explicitly singling out Ukraine’s Yuzhmash as the likely source of the technology transfer.

The controversial part of the report is its hypothesis about the recent timing and the source of the transfer. Elleman concludes that North Korea has no ability to manufacture such engines and therefore must have imported them ready-made, most likely by rail, in the last couple of years from Russia or Ukraine. Although Elleman does not point directly to the Ukrainian government or Yuzhmash executives, he strongly suggests that Yuzhmash is the likely source of illegal transfers, since the enterprise had fallen on hard times following the termination of contracts from Russia in the wake of the Russian-Ukrainian war. We examine this hypothesis and find it implausible.

“Yuzhnoye has been near financial collapse…”

Western fears of know-how and technology transfers to rogue states precipitated by economic hardship and lax institutional controls are not new, and were particularly pronounced in the early 1990s following the collapse of the Soviet Union. Such fears were not unfounded and spurred robust policy responses by the United States, namely the Cooperative Threat Reduction Program, also known as the Nunn-Lugar program, that financed a broad range of projects in the former Soviet Union to aid disarmament.

Whatever financial woes Yuzhmash might encounter today, they pale in comparison to those it faced in early 1990s, when its giant military industry suddenly found itself with no contracts, while tens of thousands of highly qualified scientists had to be paid their wages. At that time, Ukraine received all kinds of requests about missile technology transfers from rogue states, including North Korea, but all of them were denied. Instead, Ukraine joined the Missile Technology Control Regime (MTCR) as a space-firing nation.

While Yuzhmash is no longer world’s largest missile builder it once was, it had managed to weather the hardship of post-Soviet transition and successfully establish itself in international markets, despite cutthroat competition. Under such conditions, giving a hand to North Korea would be not only incredibly damaging to Ukraine politically at the time when it yearns for Western support, but also highly imprudent if not suicidal for Ukraine’s space industry.

Ukraine has made an exceptional contribution to nuclear nonproliferation, having dismantled the world’s third-largest arsenal of nuclear-armed ICBMs it inherited from the Soviet Union and cooperating with the United States and international partners on a variety of nonproliferation projects. Granted, Elleman, in his report and in a later reiteration on Twitter, stressed that he does not allege that the Ukrainian government or Yuzhmash executives have sanctioned the transfer of RD-250s to North Korea, but rather that rogue engineers and scientists might have been tempted by a lucrative North Korean contract. Yet as we argue below, a scheme on this scale would be exceedingly difficult to pull off by a small group of scientists without at least a tacit consent of either Yuzhmash or Ukrainian government leadership.

The second crucial point in the RD-250 matter is the two-chamber to one-chamber modification. As photos of the North Korean tests reveal, the version of LPEs used in Hwasong-12 and Hwasong-14 missiles has only one combustion chamber and nozzle combined with a turbopump. Thus, the original RD-250 had to be modified by removing one of the chambers, modifying the remaining one, and adjusting the operation of the turbopump. Elleman’s analysis of this point is elusive. He maintains that the North Koreans do not have the technological capacity to produce such engines, but says nothing about whether they have the ability to modify them. Furthermore, he alleges that some unspecified “Western experts who visited KB Yuzhnoye Ukraine within the past year” told him “that a single-chamber version was on display at a nearby university and that a local engineer boasted about producing it.”

Elleman may not be at liberty to disclose his sources, but without doing so, this statement sounds like conjecture. Additionally, there are further assumptions that need to hold if this suggestion has any purchase. To begin with, there needed to be a secret cache of old RD-250s available for modification by rogue scientists at Yuzhmash. According to Anatolii Shevtsov, former deputy chief designer at Yuzhnoie and the head of the Dnipro branch of Ukrainian National Institute of Strategic Studies, LPEs at Yuzhmash have only been produced in full assembly with the carriers and never stored separately. Only three fully assembled Tsyklon-2 space launch vehicles are currently stored at Yuzhmash. The Yuzhnoye design bureau and Yuzhmash now operates as commercial corporation owned by the government, and as such it simply cannot afford to produce a stockpile of rocket engines with no clear commercial justification for their production.

Even if there were a couple dozen RD-250 left over from the Soviet times, as Elleman assumes, the required two-to-one chamber modification is no trifling matter and would require a team of specialists, appropriate premises, and firing test benches. This would make it very difficult for the modification process to pass undetected by the Yuzhmash’s bosses and the country’s leadership.

It is more likely that if such modifications on imported RD-250s were made, they were made in North Korea. Indeed, a recent Diplomat article cited US intelligence sources asserting that, in contrast to Elleman’s assumptions, North Korea is fully capable of producing LPEs for HS-12 and HS-14. Given that it is bent on developing a long-term deterrent capability against the United States, it makes sense that Pyongyang should pursue the indigenous option, rather than relying on fickle external supply networks.

Smuggling rocket engines out of Ukraine through Russian territory by rail to North Korea, as Elleman suggests would have become more difficult since the start of Russian aggression in 2014. Rocket engines are not something a rogue scientist could smuggle in a suitcase like 25 grams of highly enriched uranium. It is a logistical undertaking of some scale that could not be pulled off without involving senior officials in Ukraine across such domains as security services, transportation, banking, the National Guard, and at Yuzhmash itself. While Ukraine has been plagued by systemic corruption, the Euromaidan revolution of 2014 has shaken up vested interests and old links between money and power have come undone, while new ones have taken shape. Delivery of financial compensation by North Korea, probably on the scale of tens of millions of dollars, is another issue that alone could unmask the entire operation.

As Elleman rightly notes, Dripro, the home city of Yuzhmash, is close to the front lines of the war in eastern Ukraine. This does not mean, however, that people at Yuzhmash are leaving the gates open. Quite the opposite; since 2014, security at Yuzhmash has been significantly tightened; it is now guarded by the fully armed regiments of the Ukrainian National Guard. Rail traffic between Russia and Ukraine has been disrupted by war, and in May of this year Ukraine’s Security Council banned much of rail freight traffic from Russia on those routes that were still open. Smuggling between Ukraine and Russia has not become impossible but, counterintuitive as it may seem, the war and sudden change in people, power structures, and transportation routes make dealing in illicit rocket engines more difficult.

The resemblance of HS-12 and HS-14 LPEs to RD-250, however, remains to be answered for. A plausible explanation is that either technical information or, as German analyst Norbert Brügge suggests, a whole R-36 missile was acquired by North Korea around the time of the Soviet Union’s collapse, giving Pyongyang ample time to reverse-engineer the engine with the required modifications, with or without the help of foreign experts. Brügge points out that a number of old RD-250s could have been scattered across the former Soviet realm. One other possible source of transfer, which has not been discussed yet, is the sites where decommissioned R-36s (Soviet missiles powered by the original RD-250 engines) had been sent for disassembly in the late 1980s, all of which are situated in Russia. Finally, one needs to consider that the RD-250 was developed by Russian Energomash, which now has a full set of the engine’s engineering documentation while also suffering from financial hardship.

It is not our intention to point to those responsible for technology transfers to North Korea, given the paucity of available information about its nuclear program, but to remind that Elleman’s attribution of North Korea’s testing success to a recent transfer of RD-250 LPEs from Ukraine to North Korea is far less plausible than it may appear on the report’s first reading.

Mariana Budjeryn is a research fellow with Managing the Atom and International Security Program at the Belfer Center at Harvard’s Kennedy School. Andrew Zhalko-Tytarenko is a computational physicist and former vice president of SpacePort Canada. In 1992-1994 he served as deputy and then acting director of the National Space Agency of Ukraine, and subsequently was deputy managing director the inter-government Science and Technology Center of Ukraine.