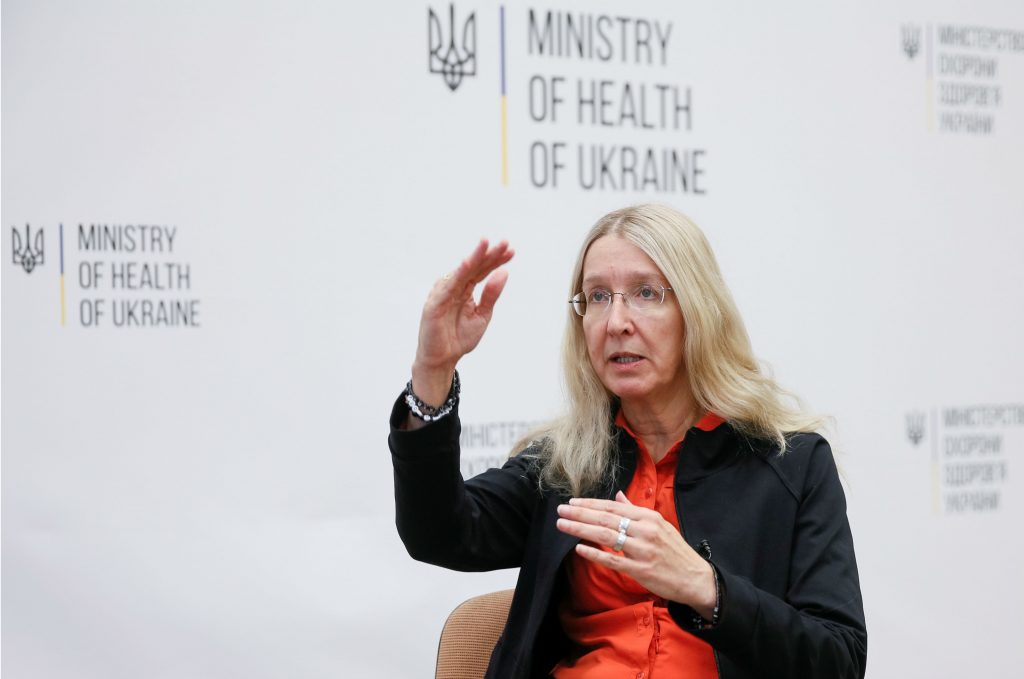 Less than two months before Ukraine’s presidential election, two independent-minded officials are being forced out. On February 5, Kyiv’s Regional Administrative Court ruled to suspend Detroit born physician Ulana Suprun’s authority to make any decisions or sign any documents as the acting minister of health. The court pointed to a regulation that limits an acting minister’s term to one month. Suprun has held the post since 2016. On February 1, the supervisory board of Ukraine’s public broadcaster dismissed CEO Zurab Alasania two years before his contract was set to expire. Suprun has been praised as one of the leading reformers remaining in the cabinet and for championing health care reform, while Alasania received good marks as well.

UkraineAlert asked a range of experts what’s going on? What’s behind the sacking of Suprun and Alasania? Are the motives behind the sackings similar? Is the government trying to remove independent minded people before the elections, or are there other motives?

Taras Berezovets, CEO of Berta Communications, Founder of Free Crimea, and TV host of Pryamyi: The motivation behind the sackings is not the same. After Suprun was attacked, President Poroshenko and Prime Minister Groisman gave her their full support. Anti-reformist factions such as the Opposition Bloc, Batkivshchyna, and Radical Party and some MPs targeted Suprun for her determination to destroy old corruption schemes.

But the attack had the opposite effect. Suprun received support from the governing coalition in parliament and is likely to become a minister. Suprun’s situation is an important reminder that reforms are not irreversible. The attack was possible because judicial reform is incomplete; there are a lot of corrupt judges still in the system.

For Zurab Alasania, the biggest problem is the timing. The public broadcaster has very low ratings and his dismissal was a matter of budget spending. If there were reasons to fire him, doing so during the presidential campaign was not the right time.

Michael Bociurkiw, global affairs analyst and a former spokesperson for the OSCE: This is another black eye for Ukraine’s image. The legal ban of Dr. Suprun and the sacking of  Alasania will go down as one step forward, two steps backward for Ukraine.

No minister has done more than Suprun to introduce reforms that have tangibly improved the lives of ordinary Ukrainians. At great risk to herself, Ministry of Health-led reforms—albeit controversial—have already eased the financial pain of seeking health care, cut out corruption and middlemen in such areas as drug procurement, and made health services more accessible and streamlined.

The abrupt firing of Zurab Alasania has the unmistakable fingerprints of the dark side of the administration of President Poroshenko. If nothing else, it demonstrates their inability to allow freedom of speech and transparency at a broadcasting outlet that reaches well over 90 percent of Ukrainians. With Poroshenko’s camp strengthening their hold on the public broadcaster, my fear now is that they’ll drop such corruption watchdog programs as Schemes (Схеми). That, in itself, is a huge loss for a democratic Ukraine.

Brian Bonner, chief editor, Kyiv Post: The ruling against Ulana Suprun exposes twin problems: the failure of judicial reform and the ongoing drive by corrupt and vested interests to remove genuine reformers. Since the Euromaidan Revolution, Ukraine has watched reformers get picked off, one by one, slowing or reversing positive changes, until now we see fewer and fewer remaining in government. While I don’t know all the details of Zurab Alasania’s dismissal, the justifications given so far violate the principle of editorial independence. The establishment of a well-financed, independent, and high-quality news operation on a public television station will be resisted and sabotaged by Ukraine’s oligarchs, who still control the Ukrainian airwaves, or their backers in parliament.

Oleksandr Danylyuk, former Finance Minister of Ukraine from 2016 to 2018: I don’t think the sackings are really connected.

Both of them are reform minded and the right people for Ukraine. Alasania was removed for trying to be too independent and not letting the public broadcaster be used by political forces during the election campaign. This was the next step after public funds for the public broadcaster were cut three years in a row. They deliberately cut his financing to make him more flexible and willing to negotiate. So when that didn’t work, they just removed him.

I think Ulana is being used. I think there is a political game happening. Someone wants to make political dividends around her situation. Potentially one candidate will try to use [the situation] during the political campaign. Overall, I think it’s much more complicated than just removing her. Removing her isn’t a good result for anyone. Artificially creating a crisis and then saving her looks like a political game to me.

It’s a ridiculous situation. The country’s leadership is expressing support for her (which she deserves) but not calling for reform of the court. That’s the real problem. There are many similar judgments that were done by the same court. But there was much less public outrage.

Since the government’s approval of Dr. Suprun’s health care reform package in late 2016, which reinforced the country’s overall reform agenda, the Ministry of Health has implemented a host of reforms that not only improve the quality of medical services, but also address the entrenched problem of corruption in the medical field.

UCCA recognizes the significant accomplishments of the Ministry of Health of Ukraine. We encourage Ukraine to continue down the path of reform, as exemplified by the work of Dr. Ulana Suprun, and not succumb to the political agenda of populist candidates and party leaders to stymie reform. We thank President Poroshenko, Prime Minister Groisman, and Speaker Parubiy for their strong support of Dr. Suprun’s leadership and reforms, and call upon the parliament of Ukraine to confirm her as minister of health.

Sergii Vysotskyi, Member of Parliament, People’s Front: Let’s divide these cases. Suprun’s case is the fight for money flows. Alasania’s is the fight over control for the public broadcaster. Personally, I’m not a fan of the policies that he made. But the timing and form was inappropriate. So the motives are different. The government is not the government. There is no such thing as a united government. There is no centralized program of removing such people from positions. It’s just how the system works. You can fight it. Or you can make it your ally for keeping power. If you do so, the actors of the system will behave as they are used to.

Poroshenko even protected Suprun publicly, which doesn’t change the fact that some of the people close to him tried to fire Suprun. And he is the hostage of those people for now. Because he has no other allies and needs to lean on someone in order to keep his position. This is Poroshenko’s great dilemma.

Volodymyr Yermolenko, editor in chief at Ukraine World Group, senior expert at Internews Ukraine, and journalist at Hromadske.ua: I think sacking of Suprun and Alasania are different.

The Suprun case primarily shows that Ukraine’s judiciary system remains unreformed and that some courts voluntarily make illegitimate rulings. The complaint against Suprun came from the Radical Party, which is allegedly linked to oligarch Rinat Akhmetov, so one can suspect financial interests are at stake. The fact that Poroshenko and Prime Minister Groisman supported Suprun might show that at least they are not behind this court ruling. Suprun is one of the genuine reformers, and she did a lot to make the Ukrainian healthcare system function.

In the case of Alasania, we witness a different phenomenon: the political class is dissatisfied that the public broadcaster under Alasania tried to distance itself from political interests. The public broadcaster’s supervisory board has representatives from political parties and civil society, but some civil society representatives also hiddenly represent interests of some political players.
This explains why a large majority of the supervisory board (9 to 3) voted to fire Alasania. But the important thing is that the decision was made with substantial procedural violations, which will invite legal challenges. And it will test Ukraine’s judiciary again. Alasania can be criticized for slow managerial progress, for a lack of strategy, low ratings, and the public broadcaster’s lack of influence on Ukraine’s social and political agenda, but he is truly committed to making the public broadcaster independent.

Yaroslav Yurchyshyn, Head of the Board of Transparency International-Ukraine: Ulana Suprun and Zurab Alasania are not the first independent professional representatives of the government who have been attacked. It is worth mentioning the former head of the National Bank Valery Gontareva, Finance Minister Natalie Jaresko, and Director of the National Anti-Corruption Bureau Artem Sytnik were under constant attack. Politicians of the old system, dependent on oligarchs, are attacking new politicians who are destroying oligarchic schemes. The president and political leaders, in isolation from these processes, support the silence of corrupt officials. And then are forced to justify their actions. Systemic reforms can change this: real judicial reform based on the selection principles of the Anticorruption Court, new electoral rules with more criminal responsibility for those who violate them and a competitive system with open party lists, and the privatization of state support. Unfortunately, there were few chances to put these changes into place before the elections.