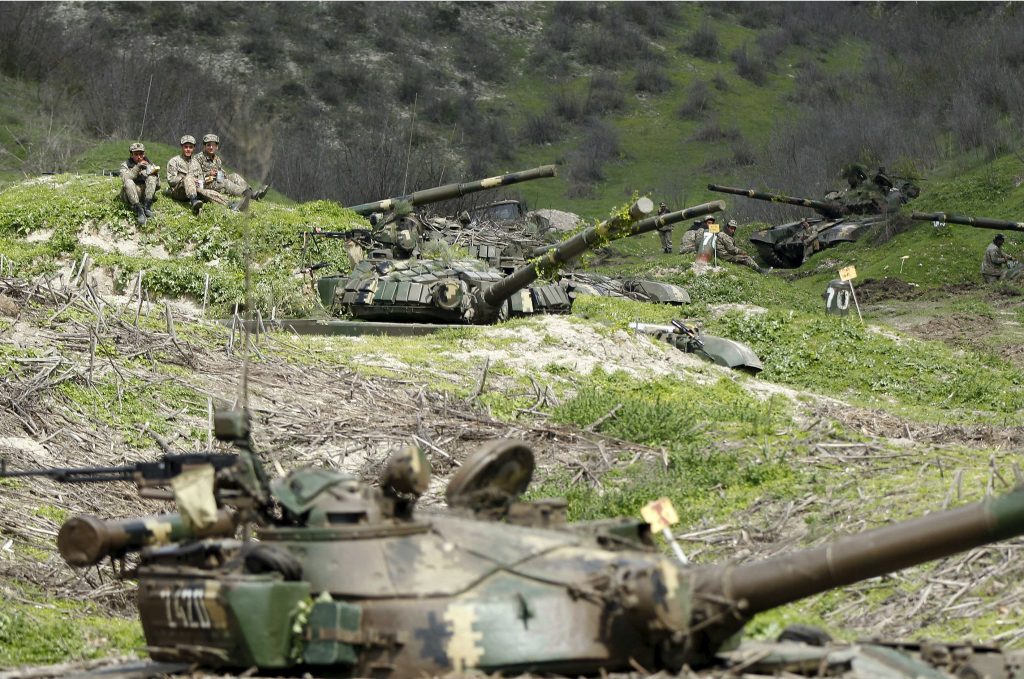 Servicemen of the self-defense army of Nagorno-Karabakh rest at their positions near the village of Mataghis April 6, 2016. REUTERS/Staff TPX IMAGES OF THE DAY

Absence of US Leadership May Have Consequences in Syria, Ukraine, and Beyond

The United States has been conspicuously absent during the latest crisis over Azerbaijan’s breakaway region of Nagorno-Karabakh (NK). The White House has not yet issued a statement on this unprecedented uptick in violence. US Secretary of State John Kerry’s statement released on April 2 is a vanilla condemnation of violence and call for a restoration of the ceasefire, which could apply to any of the numerous previous ceasefire violations. This approach leaves no sense of the intensity and danger posed by this latest flare-up of violence. Moreover, there is no indication that Kerry has contacted either Azerbaijani Foreign Minister Elmar Mammadyarov or Armenian Foreign Minister Edward Nalbandian. The only sign that Kerry is focused on the NK crisis is a statement by the Russian Foreign Ministry that Kerry and Russian Foreign Minister Sergei Lavrov discussed NK during a phone call on April 4.

Meanwhile, the Minsk Group met in Vienna on April 5, but apparently without direct participation in brokering the latest ceasefire, which occurred in Moscow among the military chiefs of Russia, Azerbaijan, and Armenia. The statement of the Minsk Group co-chairs during the zenith of the fighting on April 2 was as anodyne as the State Department’s official pronouncement.

In contrast, Russia’s top leadership has been active, and separately from its fellow Minsk Group co-chairs. Russian President Vladimir Putin has repeatedly spoken with Azerbaijani President Ilham Aliyev and Armenian President Serzh Sargsian by phone, and the Russian foreign and defense ministers have remained in contact with their Armenian and Azerbaijani counterparts. Moreover, Putin and Lavrov are reportedly headed to the region on April 7.

Russia’s goal in its lone mediation mission appears to be twofold: first, to repair its international reputation in relation to its debacle in Ukraine; and second, to strengthen the impression in Armenia and Azerbaijan that Russia calls the shots in the South Caucasus.

A key justification for the second point is the suspicious timing of the outbreak in violence. On April 1, the day before this latest phase of violence erupted, Aliyev and Sargsian met separately in the White House with Vice President Joe Biden. These meetings left the impression that maybe the United States was finally making an effort at the highest level to reinvigorate the Minsk Group process. Securing such top-level US engagement was indeed a top goal of both Aliyev and Sargsian, and they were on their best behavior in Washington to appear reasonable and in favor of an NK settlement. Hence, the last thing they would have wanted during their crucial Washington visit was the most serious violence between the two countries since the war ended. Moreover, this embarrassing violence occurred on the margins of a larger meeting of international leaders hosted by President Barack Obama, whose invitation Putin rejected.

Reflecting on Putin’s recent military adventurism, the above coincidence of events seems perhaps not so coincidental. In August 2008, while international leaders were similarly distracted at the opening ceremony of the Beijing Summer Olympics, Russian troops were pouring into Georgia, and then opened fire from behind South Ossetian forces to initiate the brief war, triggering Georgia’s counterattack on the South Ossetian “capital,” Tskhinvali. Again, in February 2014, during the opening ceremony of the Sochi Winter Olympics, Russian combat troops poured into Ukraine.

So, it may very well be that this recent violence in NK was triggered by a local commander who was manipulated or paid by Moscow to open fire, with the intent of prompting a counterattack and thus, a contained military conflict, which would demonstrate to the leaders of the South Caucasus—and the world—the indispensability of Moscow rather than Washington.

Regardless of whether this reasoned speculation bears out, the fact that the US administration is so absent and restrained in its response to the most serious military clashes between Armenia and Azerbaijan in twenty-two years has the impact of ceding the strategic field in the South Caucasus to Russia. This can have profound and dangerous consequences in Syria, Ukraine, and far beyond.

Matthew J. Bryza is a Nonresident Senior Fellow with the Atlantic Council’s Dinu Patriciu Eurasia Center. He was the US Co-Chair of the Minsk Group from 2006 to 2009.