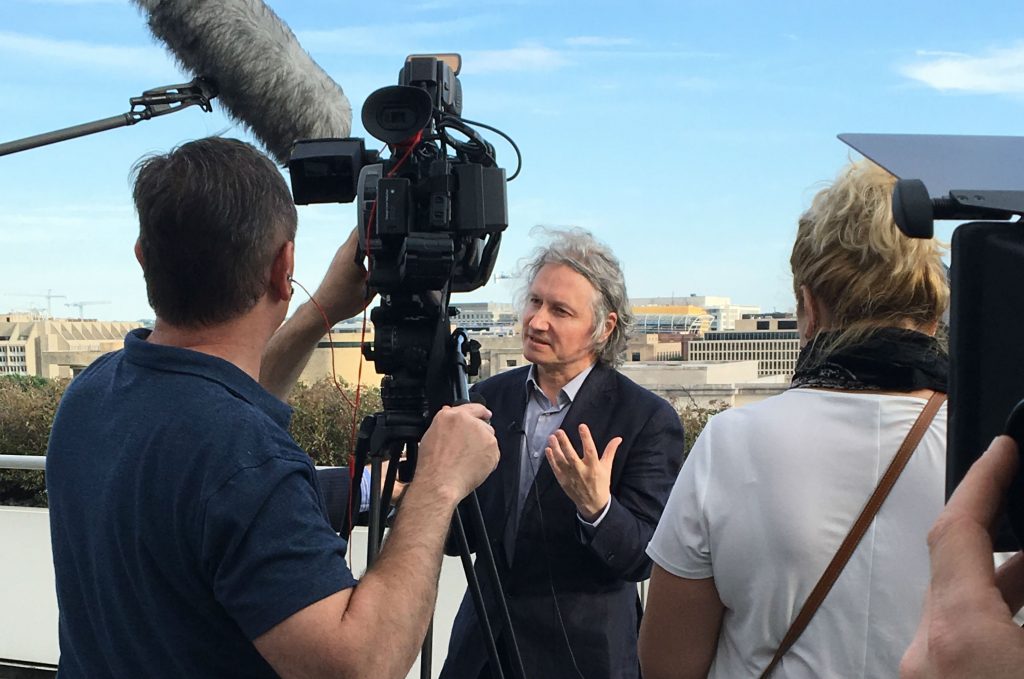 On June 13, the Newseum did what the European Parliament was too principled to do: it showed The Magnitsky Act, Russian filmmaker Andrei Nekrasov’s controversial new film about Sergei Magnitsky.

Magnitsky was a Russian tax lawyer who investigated a tax fraud scheme on behalf of his client, British-American financier William Browder. In 2008, Magnitsky accused law enforcement and tax officials of involvement in a scheme that used Browder’s company, Hermitage Capital, to defraud the Russian treasury of $230 million. He died in prison in November 2009 after allegedly being tortured.

The Magnitsky Act, a two-hour documentary of sorts, portrays Magnitsky as an accomplice rather than a victim.

The torturous two-hour film is not strictly a documentary. It feels like a NTV-style show with cheap tricks and bad acting. It includes interviews, dramatic reenactments of how things might have happened, and plenty of gratuitous shots of Nekrasov from a variety of angles.

The Magnitsky Act makes a number of claims that are easy to prove wrong. For example, it asserts that Magnitsky wasn’t beaten by prison guards. Postmortem photographs show bruises on Magnitsky’s hands and legs, his official death certificate states that he suffered from cerebral cranial injury, prison documents state he was beaten, and a Russian government forensic team concluded that that Magnitsky suffered from blunt force trauma.

“Nekrasov ignores obvious evidence of torture and fraud by Russian officials, accepts at face value claims by those same Russian officials implicated by Magnitsky, and essentially accuses a dead man of committing the crime instead,” said David J. Kramer, senior director for human rights and democracy at the McCain Institute for International Leadership.

Echoing the Kremlin line, the most outrageous claim in the film may be that Magnitsky and Browder themselves stole the $230 million. The lies and distortions go on and on.

After the film was shown, Nekrasov took questions at the Newseum.

Ilya Yashin, a leading Russian oppositionist, stood up and told Nekrasov, “I’m ashamed of you. You can Google and understand that it’s a lie.”

About eighty people attended the screening. As the credits rolled, moviegoers shouted “lies” and “shame” in English and Russian.

With a mop of curly gray hair, Andrei Nekrasov, 58, was once known as a fierce Putin critic. His 2004 film, Disbelief, and his 2007 film, Rebellion: the Litvinenko Case, both argue that the FSB, the Russian state security service, was behind the 1999 apartment bombings in Moscow to justify the second Chechen war and bring Putin to power.

But he’s changed his tune. He praised Europe’s last dictator, Alexander Lukashenko, in a 2010 film titled Together Forever. In 2014, he supported Putin’s invasion of Ukraine and downplayed Russia’s lack of press freedom.

In an interview, Nekrasov said that he started out in 2010 intending to make a “Magnitsky the hero” film, but as filming progressed, he changed his mind.

The screening is the latest volley in a battle by the Russian government and its allies to cast doubt on Magnitsky’s death, which led the United States in 2012 to sanction dozens of Russian officials.

“It’s a full-scale active measures campaign,” one Congressional aide told us on the condition of anonymity. “Nothing that [Nekrasov] brought to the story is new. It presents the Russian side.”

Kramer, who vigorously advocated for the Magnitsky Act when he was president of Freedom House, agreed. “Andrei Nekrasov’s film is scandalous and plays right into the Kremlin’s hands. Perhaps that was the point,” he said.

A global Magnitsky Act is making its way through Congress, after the House Foreign Affairs Committee approved it in May; the legislation would impose sanctions on people around the world for human rights abuses like those suffered by Magnitsky. But the campaign to discredit Magnitsky is continuing: US Congressman Dana Rohrabacher (R-CA) tried to delay passage of the bill and then attempted to remove “Magnitsky” from its name.

Gunnar Ekelove-Slydal with the Norwegian Helsinki Committee, a human rights group, told the Financial Times that blocking a global act—or at least removing Magnitsky’s name—is “priority number one for Russia.” The fight has broad implications for US-Russian relations, as well as for EU sanctions on Russia. Ekelove-Slydal warned that if lobbying efforts muck things up and sow doubt, it will be easier for the Russians to undermine the EU’s sanctions on Russia for invading Ukraine.

Screenings of the film have been canceled in Europe. The European Parliament canceled a screening an hour before it was scheduled to show on April 14 in Brussels; the French TV network ARTE and the German ZDF also canceled broadcasts that were scheduled for May. It was also dropped from a Norwegian film festival.

Magnitsky’s mother and his widow, Natalia Magnitskaya and Natalia Zharikova, also urged the Newseum’s trustees to intervene and cancel the screening. It’s a “fallacious film” that “make[s] a mockery of Sergei’s life and death,” they wrote.

But the Newseum refused to back down. “We stand for free speech and free expression,” said Scott Williams, a spokesman for the Newseum. He noted that the Newseum often rents out its facilities for a variety of functions and is not sponsoring the event.

“We believe that free expression is the only approach possible to understanding the complex issues we all face in the world today,” Williams said.

The Potomac Square Group, a firm run by former Wall Street Journal reporter Christopher Cooper, rented the facilities at the Newseum for the screening. Cooper refused to disclose who is footing the bill.

Natalia Arno is president of the Free Russia Foundation and Melinda Haring is the editor of the UkraineAlert at the Atlantic Council.