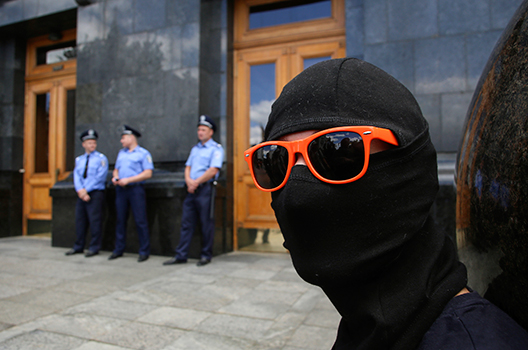 Nearly two-thirds of Russians in a survey this month support the arming of the Russian-backed separatist fighters in southeastern Ukraine, according to the Moscow-based Levada Center for public opinion research. In other words, the Russian people are giving President Vladimir Putin the green light to do what he is doing, even as he says he is not.

While some elements of Russia’s support for the uprising have been documented (its military leader, Igor Girkin, is a Russian army colonel from Moscow, and its fighters include Russian Chechen and Cossack police auxiliaries) fewer details have emerged about how the thousands of militiamen have been armed. Ukrainian and US officials say surveillance data show that Russia sent tanks, stripped of their usual markings, into Ukraine this month to reinforce the separatists. Early in the three-month-old conflict, the separatist militias seized arms from Ukrainian government facilities in Donetsk and Luhansk provinces.

The Levada Center poll emerged just days after Putin backed away from the option of a conventional military invasion of Ukraine by asking the Russian legislature to revoke its earlier authorization for that step. Levada found its respondents almost evenly split over the prospect of an invasion, with 45 percent opposed and 40 percent in support.

The poll was conducted June 20-23 among a random sample of 1,600 Russians 18 years and older in 134 cities and towns covering 46 administrative regions in the Russian Federation, Levada said.

The survey found that Russian appetites for intervention in former Soviet republics to protect the interests of Russians has declined since March, when Russia had invaded and begun annexing Crimea from Ukraine. In March, 58 percent of respondents said Russia had the right to annex former Soviet territory where it considered Russians’ rights suppressed. This month’s survey found 41 percent in support. Only 7 percent opposed such intervention.

Other findings of the poll were these:

Image: An activist takes part in a protest calling for an end to the ceasefire against separatist rebels outside the Presidential Administration Building in Kiev June 28, 2014. The European Union signed an historic free-trade pact with Ukraine on Friday and warned it could impose more sanctions on Moscow unless pro-Russian rebels act to wind down the crisis in the east of the country by Monday. REUTERS/Konstantin Grishin