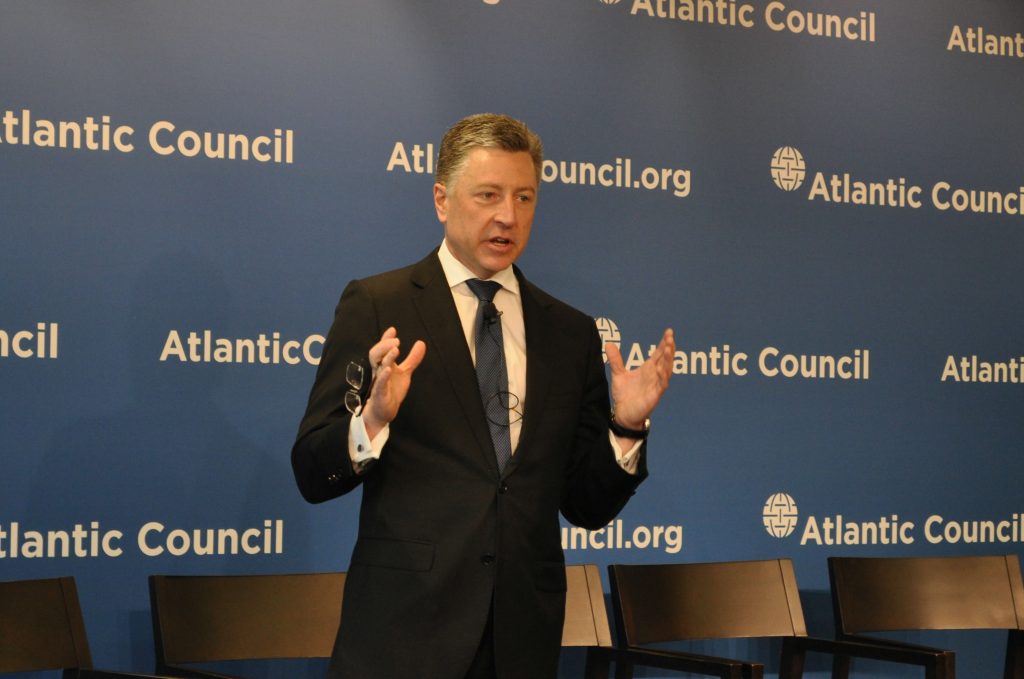 2017 has been the most violent year of the conflict in eastern Ukraine since it began, according to Kurt Volker, US Special Representative for Ukraine Negotiations.

“A lot of people think that this has somehow turned into a sleepy, frozen conflict and it’s stable and now we have…a ceasefire,” Volker said on December 19 during an event on peace in the Donbas at the Atlantic Council. “That’s completely wrong. It’s a crisis.”

But negotiating an end to the conflict is difficult because of the role that Russia plays. “Russia is continuing to deny its own role in this, and this is why this has been so difficult to resolve from the beginning,” Volker said. The war has killed more than 10,000 Ukrainian troops, displaced 1.6 million people, and injured thousands of civilians.

In July, Secretary of State Rex Tillerson appointed Volker to find a way out of the stalemate. Since then, he has met with Russian presidential aide Vladislav Surkov, most recently in Belgrade.

In September, Russian President Vladimir Putin proposed a UN peacekeeping mission that would be limited to protecting the Organization for Security and Cooperation in Europe’s unarmed monitors along the line of contact, which separates Ukraine from the occupied territories. Most experts think Putin’s proposal would freeze the conflict rather than restore Ukraine’s sovereignty over the occupied territories; few take it particularly seriously.

Volker said a resolution in Ukraine “can only come about by a withdrawal of Russian forces. If Russia is willing to do that…certainly the entire international community is willing to help.”

Volker is a smart diplomat, and he danced around the question of whether Russia is actually willing to leave Ukraine.

But in the panel that followed Volker’s keynote address, other experts were more direct. Most expressed doubt that Russia wants out.

“[Putin’s UN peacekeeping plan] was designed as a trap for Ukraine,” said Oleksiy Melnyk, co-director for foreign relations and international security programs at the Razumkov Centre in Kyiv.

Evelyn Farkas, a nonresident senior fellow at the Atlantic Council, was equally pessimistic. “Ultimately, I don’t believe Russia will cede control over its shared border with Ukraine,” she said; that’s the step that would precede a UN peacekeeping plan. She said she’s “incredibly skeptical” that the Kremlin wants a true solution in the Donbas.

Putin may see the status quo as the safest option for now, said Alexander Vershbow, a distinguished fellow at the Atlantic Council. After all, given the unrest currently occurring in Kyiv—the government tried to arrest presidential nemesis and former Georgian President Mikheil Saakashvili in early December, and the parliament attempted to strip a key anticorruption institution of its independence—Moscow doesn’t have to do anything more to destabilize Ukraine.

John Herbst, director of the Eurasia Center and a former US ambassador to Ukraine, agreed. There’s been a certain hardening of the Kremlin’s position on Ukraine since the domestic turmoil began. The Kremlin may think it can wait it out, he said.

Nevertheless, Putin’s calculus might change after Russia’s presidential election in March, Vershbow speculated, and we should be ready if it does. There are ways between now and then that the United States can generate more leverage and encourage Putin to change his calculus. Vershbow said giving Ukraine lethal defensive arms and applying more sanctions on Russia would do both. Prolonging the conflict indefinitely isn’t in Russia’s interests, he said.

Russia eventually has to deal with this issue if it wants better relations with the United States. Earlier this month, Tillerson said that Ukraine “stands as the single most difficult obstacle” to a normal relationship with Russia.

Even if Putin’s suggestion of a UN peacekeeping mission was little more than a showy PR move, Vershbow said he doesn’t “see any other way out of this,” he said. A UN peacekeeping mission could include police and military forces, as well as an interim civilian administration, since the Ukrainian government may not be immediately welcome. Vershbow estimated that 20,000-50,000 peacekeepers would be needed.

The UN would have to work out its relationship with the Organization for Security and Cooperation in Europe and the mission’s duration. The relationship with local militias will be tricky as well, Vershbow admitted. The mission would need to maintain security along the contact line and the international border and establish order. Creating secure conditions so that elections can be held is the ultimate goal, he said.

Now is the time to start recruiting for the UN mission, urged Sarah Mendelson, the former US ambassador to the United Nations Economic and Social Council.

Even if a UN peacekeeping mission looks premature now, Volker is spot on when he said that “we really need to make every effort” to bring about genuine peace in Ukraine in 2018.

Melinda Haring is the editor of UkraineAlert at the Atlantic Council. She tweets @melindaharing.