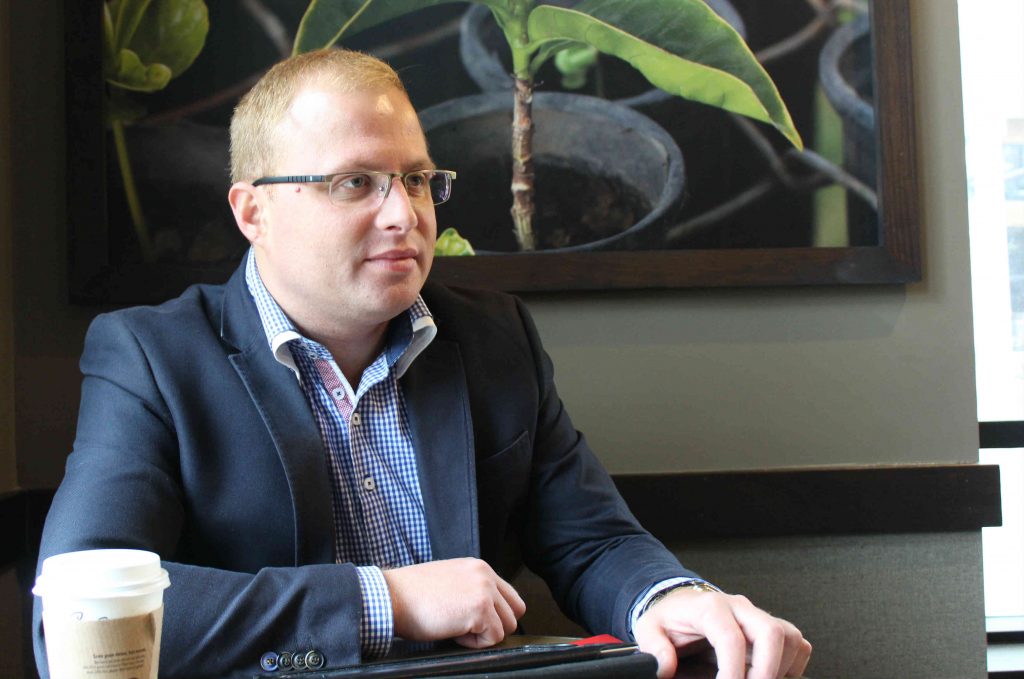 Bogdan Yakymiuk radiates optimism. But despite his quick smile, the thirty-seven-year old reformer is deadly serious when it comes to corruption.

“Over 30 percent of our yearly budget is being stolen one way or another through corruption,” Yakymiuk said in an October 27 interview in Washington.

Yakymiuk, head of the Anti-Corruption Council of Ukraine, an independent, nongovernmental organization, is no stranger to the fight. He works regularly with Transparency International Ukraine and other national and international partners. His organization is a member of the United Nations Global Compact and the UNCAC Coalition. He previously served as a civil servant for ten years, making his critique trenchant and relevant.

A New Era in Ukraine?

Ukrainian President Petro Poroshenko has promised to get to the bottom of the country’s pervasive corruption problem.

“A new struggle against [corruption] begins,” Poroshenko declared on June 4, emphasizing the country’s need for deregulation, privatization, and de-oligarchization.

And on October 21, Poroshenko said, “Finally we will be able to demonstrate decisive steps for the development of our country.” He told journalists he was talking about steps to combat corruption and reform the judiciary and the prosecutor’s office.

“After Poroshenko has been the President for a year, the situation hasn’t improved,” he said.

In October 2014, Poroshenko created the National Council for Anti-Corruption Policy to advise the President. It took him almost a year to finally appoint the legendary human rights leader Mustafa Jemiliev as head. The delay wasn’t “because of the complicated procedures. He appoints them with a signature,” Yakymiuk noted; he believes the President was simply dragging his feet.

“I respect Mustafa Jemiliev. But is he experienced in anti-corruption?” Yakymiuk said. “The president only wants loyal people around him, including Prosecutor General Viktor Shokin.”

“If someone wants to fight corruption, he must demonstrate his own example,” Yakymiuk said.

That’s something Poroshenko has not done, according to Yakymiuk. During his presidential campaign, Poroshenko pledged to sell his chocolate business, the popular Roshen confectionery brand, and it was “one of the reasons why Ukrainians decided to trust him. People thought, ‘He is a rich man, he earned his money, he didn’t steal it. He will be focused on improving the country, not his business,'” Yakymiuk said.

But Poroshenko still owns Roshen and other businesses. His factory is the leading candy producer in Ukraine, Yakymiuk noted. The President is worth an estimated $1.3 billion.

How to Fix Ukraine

Yakymiuk may be quick to criticize the government, but he’s thought about how to fix the country.

The first priority should be eliminating the influence of oligarchs in politics by focusing on “where the majority of money runs”—namely energy.

Second, the government should clean up the judicial system. Yakymiuk calls it the “blood system of Ukraine that is infected now.”

In 2014, Ukraine held more than 1,200 corruption trials, but only approximately thirty people went to jail as a result, and none were high-level officials.

Judges should be hired through an independent, competitive, and transparent process, Yakymiuk emphasized.

“Misha is waking up [the] Ukrainian nation. Ukrainians still sleep now. People hear only declarations, but feel no results. They take children to school, they pay bribes. Ukrainians think that people who have power can do anything they want. That’s why most people have a loyal attitude toward corruption. It’s easier to solve one’s problem this way in Ukraine.”

To Yakymiuk, former Georgian President Mikheil (“Misha”) Saakashvili is a shining example of a leader who has successfully focused on anti-corruption. Saakashvili eliminated political corruption in Georgia by firing the old guard and bringing a new generation into state agencies. He reformed the police force and the judiciary, and aggressively cut red tape and bureaucracy, leading both the World Bank and Transparency International to give the small post-Soviet state top marks.

Yakymiuk has studied Saakashvili’s example and thinks that he was successful in part because he pushed the reforms himself, rather than delegating responsibility to an anti-corruption body.
Poroshenko needs “to be the head of the process. To daily control what’s going on,” said Yakymiuk.

“It is clear [that] to overcome corruption at once and everywhere, it’s impossible. Every country has corruption. What matters is the level of corruption and whether corruption affects political and state agencies,” he said.

“Even though Ukraine is a bigger country [than Georgia], we still have a chance.”

New polling shows that Saakashvili is the most popular politician in Ukraine.

Saakashvili can take on the city’s powerful oligarchs and mafia because he wants to go back to Georgia as a national hero, he said. “If he’ll lose in Ukraine, Georgians will not accept him as a national hero.”

Drawing on his charisma, reputation, and experience in Georgia, Saakashvili should build a political party or faction that would gather Ukraine’s professionals and intelligentsia and help them get elected, Yakymiuk thinks.

“He could be the one who could help Ukrainians implement the Ukrainian Dream,” he mused.

Ukrainians want change and are fed up with the new government’s lack of visible reforms.

“Maidan three will happen in Ukraine; it’s only a matter of time,” predicts Yakymiuk.

According to a recent poll sponsored by the International Republican Institute, 68 percent of Ukrainians think the country is moving in the wrong direction.

Yakymiuk is slightly more optimistic. “The Ukrainian President and Prime Minister still have time to change the situation, but in one year, there will be no way back,” he said.

Melinda Haring is editor of the UkraineAlert at the Atlantic Council.