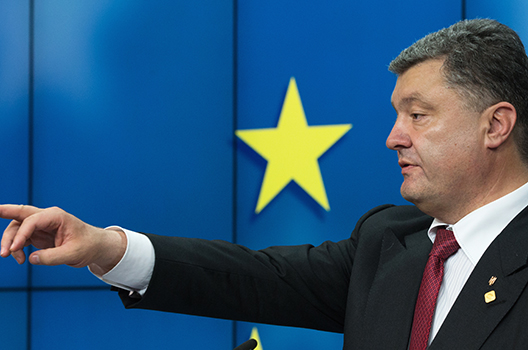 Putin’s defeat is not obvious if we look ahead, for Russia has plenty of resources – fighters, weapons and economic pressures – that it can throw into its proxy war on Ukraine. That war, in southeast Ukraine, will be a dirty, urban guerilla fight that may resemble the Spanish civil war of the 1930s, analysts such as former US national security advisor Zbigniew Brzezinski have said, but Ukraine ultimately will win it.

Still, the Kremlin’s reversal is clear if we look back seven months. On November 28, after then-President Viktor Yanukovych refused to sign the association agreement with the European Union that his government had negotiated, the Guardian wrote this: “A six-year campaign to lure Ukraine into integration with the EU and out of the Kremlin’s orbit failed on Friday when President Viktor Yanukovych refused to sign a pact at a summit in Lithuania.”

Now Yanukovych is forgotten, Ukrainian opposition to Russia has led to its most unified election result since independence, the president thus elected has just signed that very agreement with the EU – and Ukraine is fighting Russia.

Poroshenko’s speech announcing that Ukraine would resume military operations “means that Ukraine has a strong leader who will not allow Putin to create a gigantic Transnistria in the Donbas,” says Atlantic Council Senior Fellow Adrian Karatnycky.

Poroshenko is not overreaching. “The fact that he called for a cease-fire [on June 20] also is a signal that he is a pragmatist who is willing to try to reach a settlement, provided it does not impinge on Ukrainian sovereignty and territorial integrity,” Karatnycky said following Poroshenko’s speech.

Reports of new fighting in Donbas have emerged only hours after Poroshenko spoke. “Now the west needs to respond with sanctions against Russia’s proxy war,” said Karatnycky.