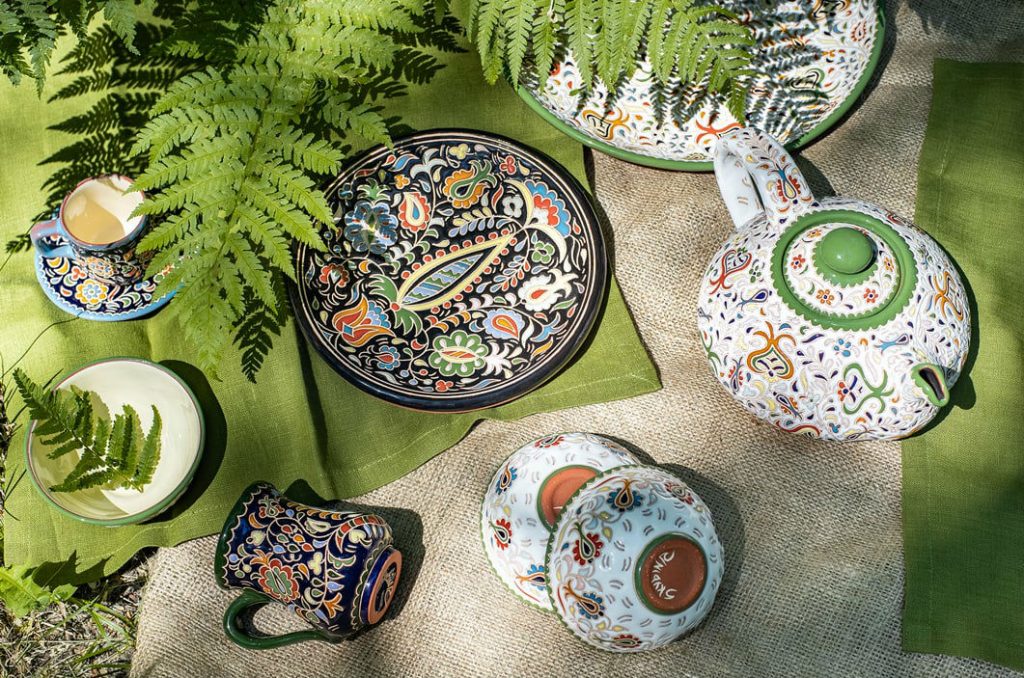 Walking into Rustem Skybin’s studio in Kyiv, Ukraine, one is likely to find him sitting by his pottery wheel in his skullcap, turning and shaping wet clay for a new teapot spout or a dinner platter. Over and over, his fingers mix wet and dry clay together by hitting and kneading, to get a perfect consistency. The smell of fresh brewed Turkish coffee wafts through the studio with dates on a plate, waiting for a friend.

“We must start from the beginning—the meaning of life and balance of the universe,” Skybin said. This is how Skybin started our pottery lessons in 2017. I did not touch any clay or a pottery wheel until the second day. I had expected technical lessons on the art form but instead spent the first six hours discussing what defines life, a home, culture, and a citizen. Skybin’s calming soft voice can make the most complex philosophical topics seem simple, like listening to a bedtime story. He weaves his experience of anthropology to tell stories, and through him, the stories of the Crimean Tatar people.

The exchange of stories and knowledge is continuous in Skybin’s studio. An artist and anthropologist, Skybin travelled to many villages throughout Crimea to take photos and record the history of the villagers. With more than 700 photos and extensive oral histories, he finds connections despite generations of separation and tragedy.

The history of Crimean Tatars is a repeated cycle of separation and tragedy. In 1945, Joseph Stalin deported around 500,000, the entirety of the indigenous peoples of Crimea, shipping them off in freight trains to Siberia and Central Asia. Roughly half of them died in the first year. Once the Soviet Union broke apart in the 1990s, Crimean Tatars travelled back to their homeland, if not their original homes. The repatriation was difficult, as most of their homes had been lived in by Russian speaking people for forty-five years. Not even a generation later, in March 2014, Russian soldiers arrived and occupied Crimea, ahead of the current slow burn war in the Donbas.

When the Russian army occupied Crimea in 2014, Skybin still lived and worked in the village of Akropolis near Simferopol. Skybin and his fellow artists and neighbors went outside with sticks to patrol the area to keep his village safe, but upon seeing the incoming Russian tanks, he realized things would not be the same. He packed his pottery wheel and left. He moved to Ukraine’s capital city Kyiv, opening a new studio in the Podil neighborhood.

The Crimean Tatar’s studio often teems with activity into the early hours of the morning, with his team carving designs into the partially baked clay. The rising and falling sounds of the soft carving of the clay and brushing away of dust sounds like breathing. Each twist and turn from the edge of the tools are drawn with no break until the line is complete. The delicate lines form intricate flowers, fruits, and symbols of protection. Every stroke, carving, and nick has a specific meaning and represents an aspect of Crimean Tatar culture and history. The ornate vine that twists on his plates starts in a small spiral—it is the start of life stemming from the universe—representing the versatility that women bring. The centered cyprus trees split down the middle depict the strength and balance that men provide. These ornate plates are the first image one sees when entering his studio.

Skybin’s pottery has sparked a resurgence of Crimean Tatar artists creating their own pottery and embroidery, sharing their history with a new audience. Artists like Rustem Maksudov in tree carving, Hatice Yunusova in leather embroidering, and Refat Kurtiev in copper stamping. Young Crimean Tatars train under him, continuing the legacy and art of their people.

Although the Crimean people continue to face occupation and dislocation, Skybin’s art reminds of the vibrant history and culture that they create. The energy and compassion that Skybin exudes is felt through his pottery. As Russia continues to occupy Crimea, Ukraine embraces Crimea as a part of its own culture through the artistry of Skybin and others. In June 2017 when Ukraine achieved visa-free status with the EU, Ukrainian leaders gave Skybin’s Crimean Tatar plates to members of the diplomatic corps as a symbol of successful contemporary Ukraine.

Skybin wants to pass down his art and stories to the next generation. He is a natural Oja (teacher), sharing stories with passion and a sense of duty. If one happens to walk past his studio in Podil, one may hear the spinning of his pottery wheel, and see him sitting in his Taqiyah cap, waiting for his next cup of coffee or a friend about to walk through the door.

Go in. The dates are waiting.